Superbooks: High-tech reading puts you inside the story

Interaction and immersion create a new concept of reading experience

Imagine you could tell Romeo that he doesn’t need to take the poison to be with Juliet, warn Streetcar’s Blanche Dubois not to rely on the kindness of strangers, or suggest that Jonathan Harker take his vacation somewhere other than Transylvania.

The power to influence and interact with the stories in classic literature is a tempting prospect, and this is the premise of Inkle Studios’ audacious attempt to apply the full possibilities of digital media to fiction. The result is an updated form and experience for the stubbornly progress-proof novel.

The British startup’s latest experiment is 80 days, an iPad adaptation of Jules Verne’s classic voyage. The user plays the assistant of explorer Phileas Fogg, and crafts their own journey of romance and murder around a world with thousands of possible permutations based on the decisions they take. The central narrative, written by Meg Jayanth, is a steampunk remix of Verne’s novel, broken into thousands of individual passages that recur throughout the experience.

“The heart of the concept is that we put player choice into books”, says Jon Ingold, Inkle’s Creative Director, former designer at Sony and school teacher. “They are in moment-to-moment relation with the narrative, involved and engaged in what’s happening. It makes players culpable in an active way.”

Ingold and co-founder Joseph Humfrey – a fellow graduate of Cambridge University and colleague at Sony – are among the most innovative and successful exponents of enhanced fiction. Inkle’s 2012 hit app Frankenstein allowed users to wander through a richly-rendered Geneva, take part in the protagonist’s autopsies and put the narrative in their own order. They have produced an interactive series of classic poetry for Penguin, and their free digital writing tool, Inkle Writer, allows users to easily create heavily interactive text.

Inkle identify more closely with games – a sector whose numbers show better health than publishing – but use the elements of literature to create a hybrid that even they can’t yet define. 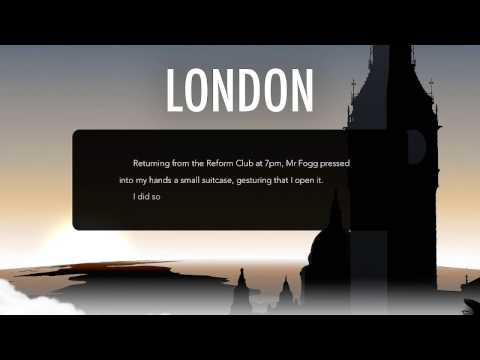 “Gaming is a young medium for telling stories and has a major problem creating realistic characters that you can empathize with,” says Ingold. “Books are great source material because they are deep and intricate; we can bring in rich, meaningful characters from literature.”

“With text-based interaction you are in conversation the whole time. The bulk of the experience in 80 days is talking, and words are great for stimulating human interaction. What we’re taking from books is the atmosphere and characters and putting them into an interactive context.”

Ingold is keen to break from the traditional book form, which he believes has constrained innovation.

“The challenge with enhancing fiction is either you don’t do much and stay too close to the original, or you do a lot and it doesn’t look like the book any more. But if you want to embrace doing things digitally, that means going for it 100 percent and not clinging on to anything from the book that doesn’t have an absolute right to be there. You end up with something we don’t have a term for yet.”

Doing things digitally means going for it 100% and not clinging on to anything from the book that doesn’t have an absolute right to be there.

The publishing industry is desperate for new forms of storytelling. The novel may not be dying, as some cultural critics suggest, but physical book sales are in decline around the world. Ebooks have compensated with solid growth in recent years, including a boom in self-publishing, but these are expected to plateau once the device market is saturated. Enhanced ebooks with features such as audio-visual content have yet to prove there is a sustainable market for them.

The Literary Platform (TLP) is a British group that brings together publishers, developers and authors to encourage collaboration, and funds writers and technologists producing inter-disciplinary content. It is attempting to bring the horizon closer by developing the use of new technologies in literature.

“We hope that writers will take an active part in these new creative processes,” says founder Sophie Rochestor. “We’re trying to inform them of the new options they have in this digital era.”

“Any project that brings a new audience to an old work is to be encouraged. Old school reviewers have been very critical of ‘gamifying’ books, but we are starting to see where those two communities are meeting.”

In some cases this means a radically different authoring process. TLP partner author Jeff Norton, for example, beta tests his books with an audience to optimize the plot and features ahead of release. It also means adapting technology to the needs of literature. Currently, publishers must release several versions of their titles for different devices, as they have different capacities for supporting features. This makes it difficult to deliver the predictable, common experience for readers provided by physical books, and adds labor and cost. Public awareness is another battle as new content forms often lack a defined space for reviews or publicity, and must build a fresh audience.

A walk through The Waste Land 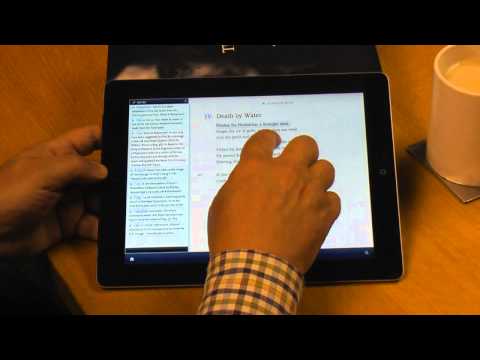 Major publishers are also heavily invested in a digital future, with departments at the ‘Big 5’ – Penguin Random House, Macmillan, HarperCollins, Hachette and Simon & Schuster – dedicated to designing new forms and products. Faber & Faber won plaudits for an interactive version of TS Eliot’s The Wasteland for iPad, making the famously difficult poem more accessible, with supporting notes and multiple audio tracks among its immersive features. Random House’s flagship Black Crown experience is an epically-detailed adventure that offers the reader a vast choice of experiences, with inbuilt social features for sharing.

Such experiences have given rise to a new discipline, the interactive storyteller.

“It’s different in almost every way,” says Rob Sherman, author of Black Crown. “It’s not just words on a screen but a rich tapestry of links or connected artwork. There is a focus on usability, as people must be able to use your work in their own way, rather than scanning back and forth in a linear narrative.”

The 25-year-old, who is to be the British Library’s first Interactive Fiction Writer-in-Residence, works with multiple disciplines including artwork and coding, but does not see this as diminishing the writer’s role.

“It’s more of a collaborative process but is still one person putting a unique view on paper. I believe in the auteur concept of building around a central vision from one individual.”

Fiction may still be escaping concept and experimentation stage, but enhanced literature has had great success in education and nonfiction. Theodore Gray’s The Elements, a visual guide to chemistry on tablets, has generated hundreds of thousands of sales. Scholastic has created the innovative Storia School Edition program, extremely popular with teachers, which enables books to be annotated and studied together by network, as well as delivering data feedback on how students are learning.

“Comprehension can suffer, depending on the quality of the book,” says Schugar. “We find children read broadly rather than deeply if the features don’t relate to the text well.”

But the new forms offer exciting possibilities. “Tablets have immense potential through features such as being able to update themselves. Students are learning new skills for using the technology. Our role as teachers could change from being the point of information to helping students find and filter information themselves.”

The future for high-tech books will likely move along different tracks. On one, new editions of e-readers will allow a drip-drip of enhanced features to complement the basic reading experience, from digital bookmarks and searchable indexes, to audio tracks and animated artwork.

Another, more ambitious direction, will see increasingly extravagant experiences that use books as a starting point but not a limiting factor. Beyond the iPad adventures of Inkle and Rob Sherman, innovators are looking at a new generation of interactive features such as wearable technology and virtual reality. MIT’s ‘Sensory Fiction’ project provides an indication of the possibilities, connecting a novel with a wearable kit to give the reader sensual cues at key moments. Irish student Eoghan Kidney is crowd-funding a project to render James Joyce’s Ulysees for Oculus Rift. 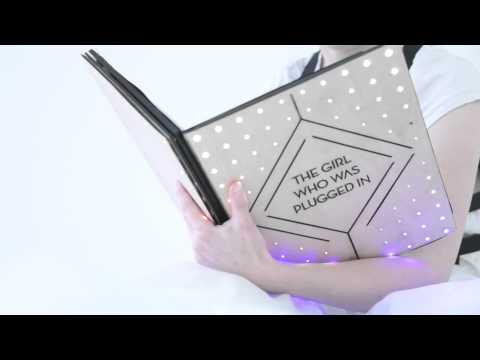 “Who knows what is possible with a smart book?” says Skip Prichard, the futurist former CEO of publisher Ingram Content Group. “Maybe we will have biometric devices that sense your pulse and temperature and change the plot based on your biofeedback. The location of a story could change based on your geolocation. Wearable devices could embed virtual reality in a way that combines a book with a movie or game. The book itself would be a launching point into a transformative experience.”

A well-thumbed paperback will never be completely redundant, and further progress is needed before high-technology experiences are a viable alternative. But as innovation gathers pace and the possibilities multiply, the digital makeover of publishing is becoming as inevitable as it was for every other form of entertainment. Fully immersive literature is drawing closer.

Turn your kitchen into an orchestra with this magic device