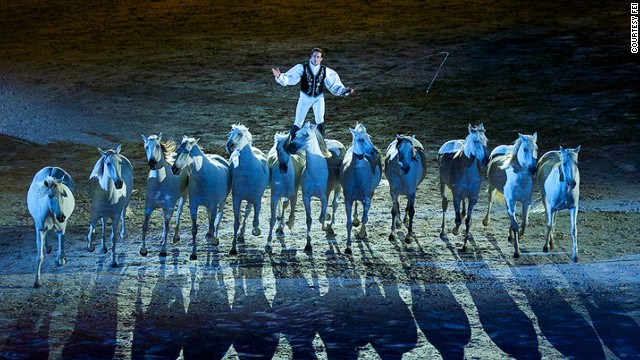 At first glance, it might appear to be a fantastical circus performance. In fact, this is the opening ceremony of the World Equestrian Games, which wrapped up this week. 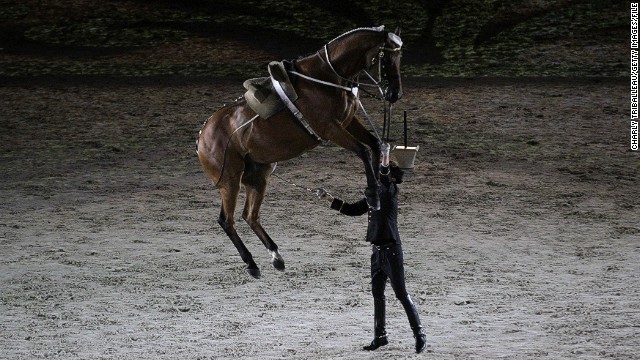 Competitors from across the globe descended on Normandy, in northwestern France, for the two-week long Games. But first they were treated to a magic trick or two... 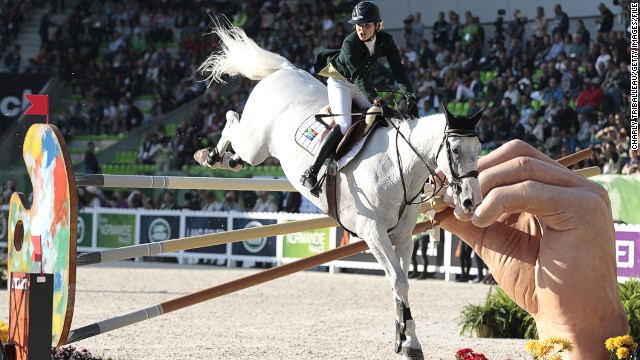 The jumping events were given a surreal Dali-esque twist with fantastical obstacles in the ring. Here, South African Cara Biana Frew takes a leap of faith over a giant painter's hand. 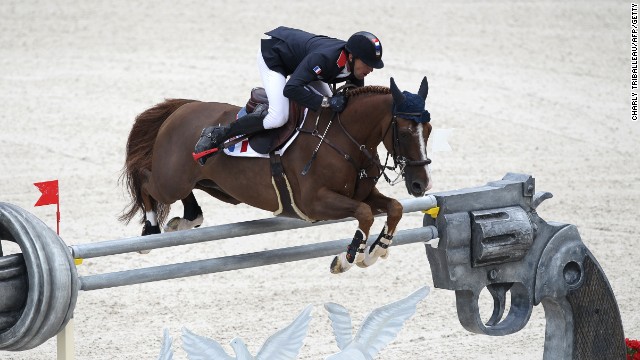 While athletes in other sports might be more familiar with starting guns, theses international equine experts had a very different interpretation. 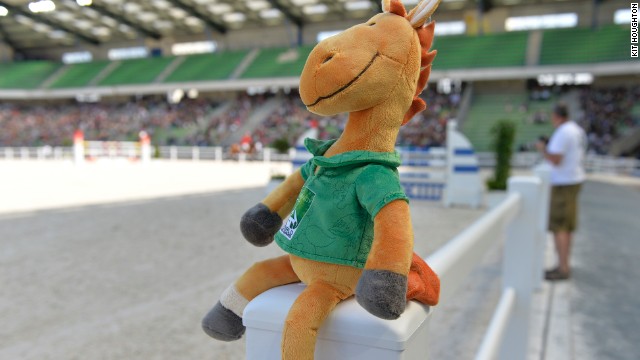 While the horses and their riders battled it out in the arena, mascot Norman -- named after the French area of Normandy -- surveyed the action. By the end of the Games, the hugely popular plush toy had disappeared from shop shelves. 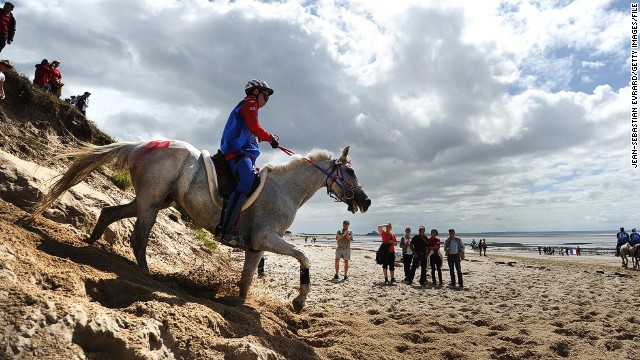 From the arena, to the beach, the variety of sports at the Games was huge. Here, riders take part in a 160 kilometer endurance race. 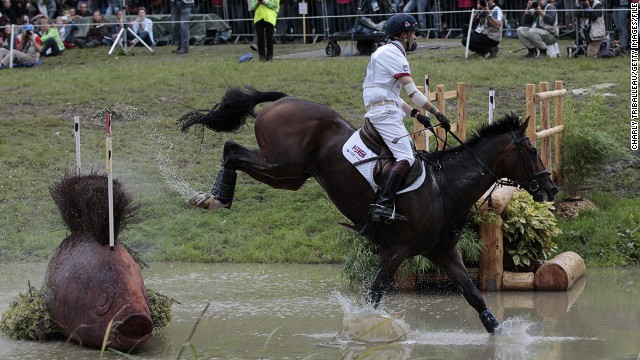 British rider Harry Meade dives in the deep end during the cross-country category. 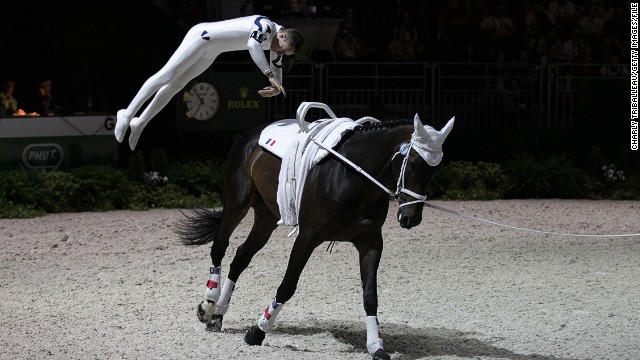 French rider Vincent Haennel shows off some breathtaking moves during the vaulting, which is essentially gymnastics on the back of a horse, a sport where athletes clad head-to-toe in spandex perform handstands, leaps, and cartwheels on top of an animal cantering in a 20-metre circle. 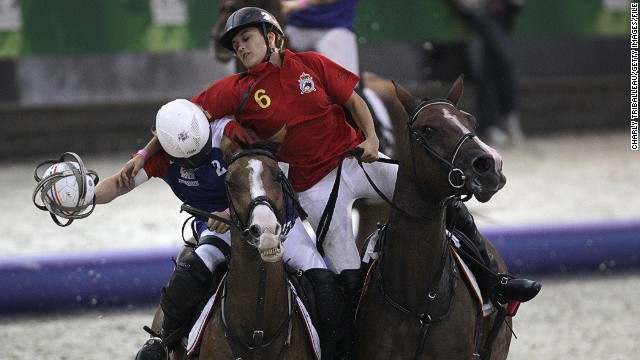 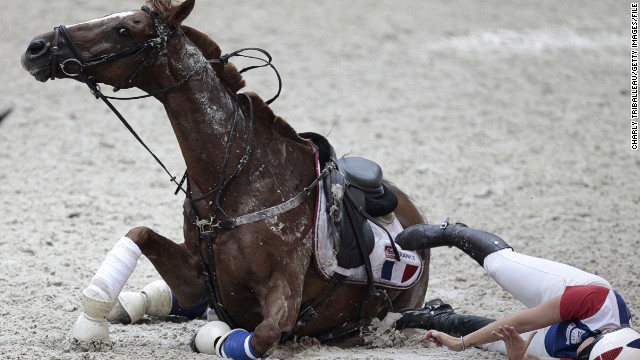 And in the rough-and-tumble world of horse-ball, it's not always easy to keep on top of things...as France's Shirley Antoine found out. 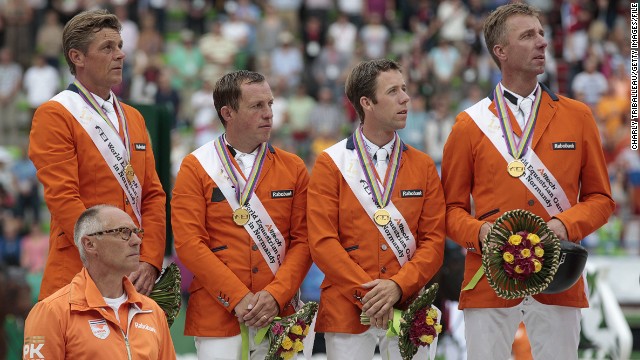 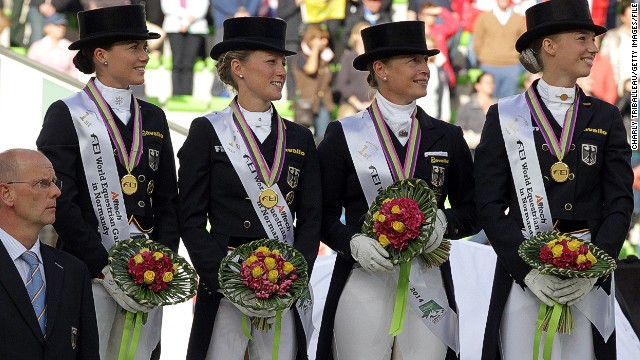 (CNN) -- Most horses at this month's World Equestrian Games could clear the water jumps. Not Norman.

Plunging head-first into a water feature he hadn't even seen, Norman lost an entire hoof in the accident.

Luckily, the eight-foot mascot -- Norman was named after Normandy, the French host province of the Games --had a spare hoof on hand.

Norman's soaring popularity may have outstripped his jumping capabilities, with replica plush-toy versions almost impossible to find by the end of the two-week Games in Caen, but there were plenty of contenders ready to demonstrate how water should be handled.

Driving is the sport to pick if you want to see horses navigate water. The sport, not seen at the Olympics, sees teams of four horses pull an old-fashioned carriage through a series of tests to determine a winner.

The most visually appealing of those tests is the marathon, in which the driver and horses must face a time trial across a course involving miniature mazes, lakes, hills and other hazards.

The driver is by no means alone: in the marathon, two teammates ride on the back of their carriage, shifting their weight as though riding a superbike rather than a souped-up stagecoach.

The Australian has now won three world titles in a row, mastering not only the marathon but also the driven dressage (fancy moves determine how harmonious your horses look) and the obstacle test (steer your team through sets of cones, losing marks for any you hit).

You cannot fault the World Equestrian Games for the variety on offer.

Take a stroll for 10 minutes from the carriage driving and you come to the Games village, an array of shops and stalls with an equestrian theme.

Ambitious spectators could be found heaving saddles around the village having been inspired to impulse buy, while local horses bustled between the shoppers, offering rides or even helping to transport equipment.

Ups - Norman fell in the water! He is too cute this guy! Want to take him home! #WEG2014 pic.twitter.com/Y4PAZbCylr

These are the literal workhorses of the World Equestrian Games -- toiling in the comparative shadows while illustrious cousins, some worth tens of millions of dollars, strutted to the beat in packed adjacent venues.

Music is surprisingly integral to much of horse sport.

Dressage, the discipline which tests how well a horse and rider work together through a series of intricate moves, has long culminated in a freestyle routine where rousing music, pitched perfectly and matched meticulously in every movement, can win you a world title.

But vaulting, too, makes the most of a melody.

Vaulting is gymnastics on the back of a horse, a sport where athletes clad head-to-toe in spandex perform handstands, leaps, cartwheels and more on top of a horse cantering in a 20-metre circle.

"Music choice is really difficult," said Britain's Joanne Eccles, who defended her vaulting world title in France this past week. "I had quite a struggle trying to find something I could work to, that looked good when I did it."

Eccles ended up settling for a selection from famed French stage show Les Miserables, with musical numbers a common theme among competitors.

"With it being from a French musical, for me it brings together the fact that I'm here in France, and I can be a bit emotional and bring together all of my vaulting," said Eccles.

The atmosphere after she finished? Anything but miserable, as organizers married the finesse and delicacy of equine gymnastics with a bombastic sound system and frenzied announcers.

Hundreds of schoolchildren screamed in unison to welcome each vaulter. France's Anne-Sophie Musset could barely contain her pride as dozens of French flags waved jubilantly back at her, following her final routine.

Patrice Delaveau knows that feeling, too. The French showjumper shouldered the hopes of the host nation on the final day of the Games.

Showjumping takes on a rare format at the World Equestrian Games -- the Final Four, a contest in which the leading four athletes must master their rivals' rides to win the gold.

First, you ride your own horse around a shortened set of jumps, aiming to do so within a specified time limit. Then, unusually, you must complete the same course on each of the other three finalists' horses.

Perhaps one of the most embarrassing fates in equestrian sport -- aside from being Norman the mascot, stepping soggily from a water jump-- is to mess up the showjumping on your own horse, only to see someone else do a better job of riding the same animal.

Step forward Sweden's Rolf-Goran Bengtsson, who clattered into a fence on his own ride (Casall Ask) then had to watch Dutchman Jeroen Dubbeldam horse whisper his way to a clear round on the same horse.

The last gold medal of the Games came down to a straight fight between Dubbeldam and Delaveau, who had overcome the sudden death of his brother Stephane, earlier in the year, to reach the highest level of showjumping in the world.

The stage had been set for an emotional victory for the Frenchman, in front of a deafening crowd inside Caen's soccer stadium.

Yet one time fault -- the narrowest possible margin -- denied Delaveau the win.

His fractionally tardy round aboard Casall Ask (again the culprit) saw Dubbeldam, who went clear on all four horses, add individual gold to his earlier team title. A dominant week for the Dutch ahead of the Rio 2016 Olympics.

If we began with Norman, the final word goes to another surprising candidate on four legs: a dog named Journey, who set a record at an event for a different species.

Sydney Collier, a paradressage rider from the United States, brought Journey on the journey as her service dog.