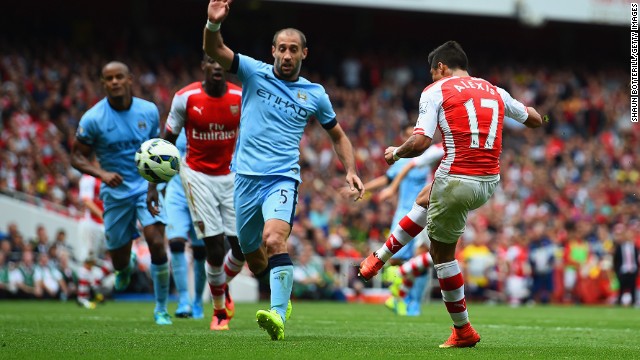 (CNN) -- A late Martin Demichelis header salvaged a point for Manchester City against Arsenal in an entertaining 2-2 draw at the Emirates Stadium on Saturday.

New signing Danny Welbeck hit the post early on for Arsenal but it was Sergio Aguero who opened the scoring for the visitors shortly before the half hour mark -- the Argentine striker lifting the ball over Wojciech Szczęsny after some good work down the right from Jesus Navas.

Arsenal, who suffered a humiliating 6-3 loss to Manuel Pellegrini's side at the Etihad Stadium last December, fought back in the second half with two goals in 11 minutes.

First Jack Wilshere scored in the 63rd minute, delicately chipping the ball over goalkeeper Joe Hart after receiving a pass from Aaron Ramsey before Alexis Sanchez netted his second league goal since joining from Barcelona to make it 2-1.

The Chilean striker made the most of a speculative header into the box from Wilshere, side-footing an exquisite volley past Hart from eight yards out.

After suffering a shock 1-0 home defeat to Stoke before the international break, City were in danger of slumping to a second consecutive league loss before Demichelis popped up with an equalizing header from a corner kick in the 83rd minute.

The Sky Blues were perhaps unlucky not to snatch all three points when Aleksandar Kolarov hit the woodwork in the 88th minute and despite six added minutes at the end of the match, neither side could break the deadlock.

The result leaves City with seven points from their opening four games while Arsenal have opened the season with a win and three draws.

Chelsea maintained their 100% record this season with another impressive display against Swansea City at Stamford Bridge.

Diego Costa netted his first hat-trick for the Blues as Jose Mourniho's side came from behind to beat Garry Monk's men 4-2.

Swansea, who were the only other side in the league to have won their opening three league matches, took the lead in the 11th minute when John Terry put the ball in the back of his own net.

And that's how it stayed until Costa leveled the scores on the stroke of halftime.

The Spanish international scored two more in the second half before giving way to new signing Loic Remy who came on to score Cheslea's fourth in the 81st minute.

Jonjo Shelvey scored a consolation goal with four minutes remaining but it couldn't stop Chelsea recording a fourth win leaving them top of the table on 12 points. Swansea stay in second with nine points from four matches.

After two draws and a defeat in their opening matches, Everton finally bagged a first league win on Saturday beating struggling West Bromwich Albion 2-0 at the Hawthorns -- Romelu Lukaku and Kevin Mirallas netting goals in either half.

Stoke, who beat champions Manchester City a fortnight ago, crashed to a 1-0 defeat against new boys Leicester City.