Golan Heights: Making wine in the shadow of war

(CNN) -- A cold morning mist hangs over row after row of deep purple grapes -- a scene ripe for thoughtful contemplation.

Just a few fields away a civil war ensues, and occasionally the sound of sirens punctuates the serene vineyard.

In the Golan Heights, two drastically different worlds exist side-by-side -- as dissimilar as water and wine.

Israel occupied this strategic plateau from Syria in the 1967 war.

And the region -- characterized by a dry climate, high altitude, and sunshine ideal for grape growing -- was turned into a major wine producer.

Today the Pelter Winery is one such site, producing over 100,000 bottles each year.

Jews and Arabs from nearby villages harvest the grapes, before a conveyer belt delivers them to a giant press.

"In a year from now it'll be ready," he explains in a warehouse stacked high with barrels. 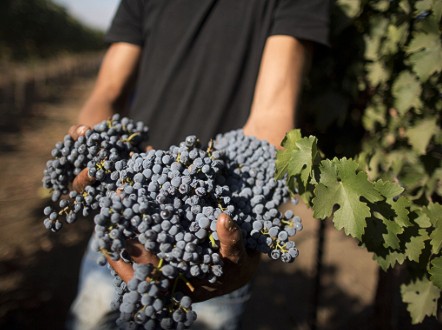 "When you go to taste the barrels you know where you started. You see the progress in the development of the flavor."

But the business hasn't been left completely untouched by the bloodshed across the rolling hills.

One time an airstrike hit the winery, shrapnel peppering the walls and injuring one person.

The tanks holding the wine were also hit, spilling tens of thousands of bottles of wine over the ground.

"It took our very calm lifestyle and shook it up a bit," said Pelter.

It took our very calm lifestyle and shook it up a bit
Tal Pelter, co-owner Pelter Winery

"But it's not something to be afraid of."

Tourists don't appear to be put off, traveling to the picturesque fields to taste wine directly from the source.

"We are wine lovers -- this is how we've stayed married for 32 years," jokes Rachel Spigelman about her husband Tzvi.

Though the leisurely sipping is suddenly cut short by a siren blaring.

Workers and tourists take cover, exposing the surreal reality of life in the Golan Heights.

Read: Abu Dhabi super mall... Build it and they will come?