From 'sumo wrestler' to distance runner 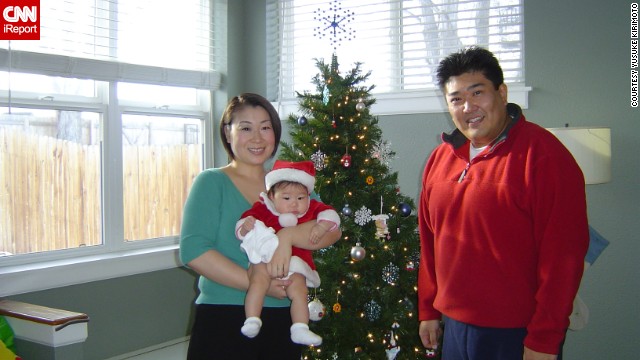 Throughout his life, Yusuke Kirimoto was overweight. He is pictured here in December 2006 with his wife and daughter in their Westminster, Colorado, home. 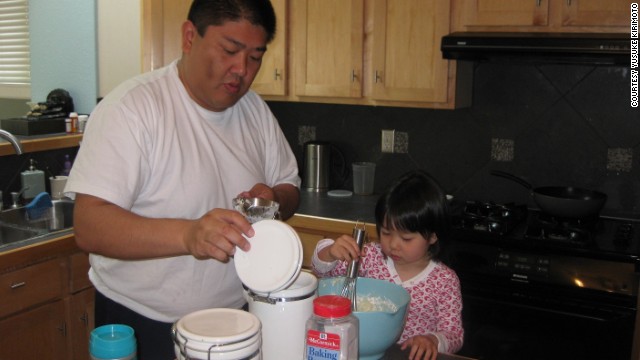 Kirimoto and his daughter Sara cook together in December 2010. His weight at the time was around 270 pounds, the heaviest he has ever been. It was during this month that he decided to make a lifestyle change and lose weight. 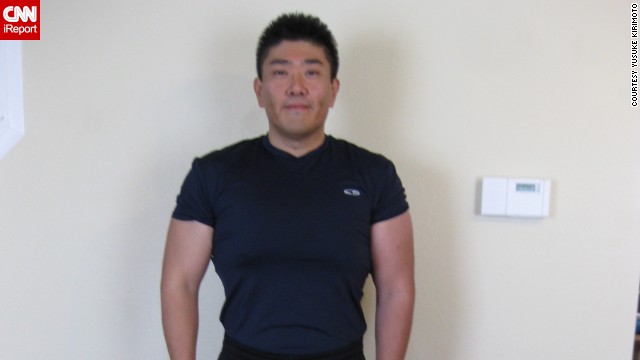 By cutting sugars and carbohydrates from his diet and lifting weights at the gym, Kirimoto was able to drop down to 189 pounds by 2011. But his fitness journey was just beginning. 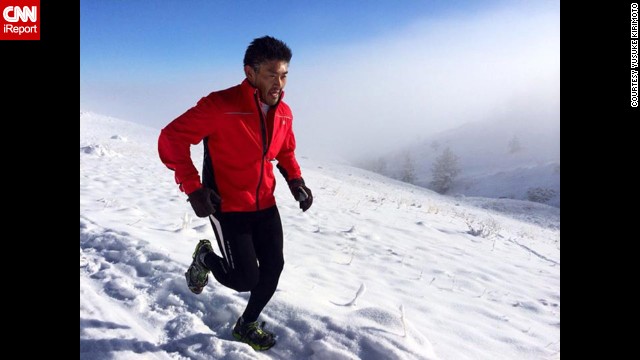 After getting advice from a friend, Kirimoto started running outside. Colorado's trails transformed his workouts from a daily gym routine to an outdoor running adventure. 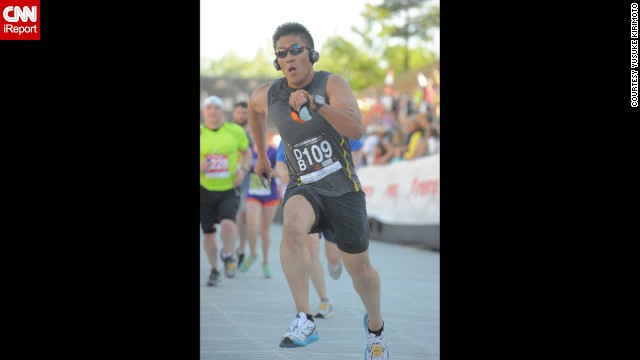 He started running longer distances and was inspired to sign up for races around Colorado. 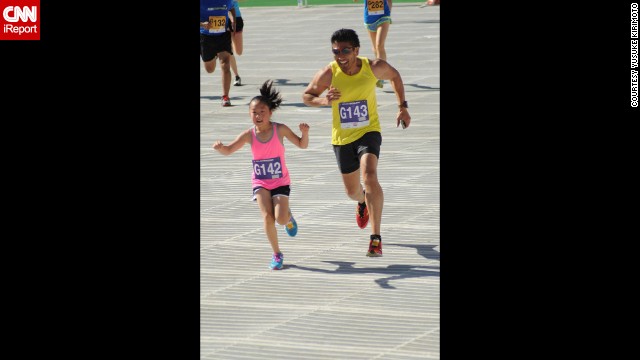 When he visited his relatives in Japan, they would jokingly say, "the sumo wrestler is back." Their comments were meant to be funny, but Kirimoto still felt the sting.

Kirimoto and his wife Megumi had their daughter Sara in 2006. Like many toddlers, Sara would run around their Westminster, Colorado, home, and Kirimoto would trail behind her, trying to catch up.

But as she got older, keeping up with Sara became a struggle for him, both physically and mentally. "I would oftentimes be so out of breath that I would almost pass out," he said. At this point, his diet mainly consisted of burgers, fries and sub sandwiches, and at least six cans of soda a day.

Kirimoto became reclusive -- even to his family. Often he would shut himself in the basement where he could be alone to eat while sitting at the computer with the curtains drawn. But Sara, then 4 years old, would find her way down to the basement and beg him to play with her.

But like so many, he had a horrible track record of failed diets and exercise attempts. He had tried countless diets in the past, and had joined a handful of gyms, that he paid for despite never going.

"I would try crazy fad diets like eating tofu for two weeks. I would cling on to anything to lose weight with the least amount of work," he said. But those fad diets would never last more than a few weeks, and his weight would rebound.

Even his wife was skeptical of his newfound inspiration to lose weight. "She would eat those types of (rich) foods in front of me jokingly, but that skepticism was the fuel. I wanted to prove people wrong," he said.

He was determined to not make the same mistakes again. This time, he was going to focus on losing weight by restricting his diet first. Then he would slowly incorporate exercise. Part of that decision came from the fear of hurting himself after spending years without working out.

Kirimoto drastically cut down on his sugar and carbohydrate intake six days a week, and used Saturday as his cheat day where he could eat whatever he wanted. His breakfast burrito was replaced with a light yogurt and a hard boiled egg or an apple. He started taking a salad to work, a dramatic shift from the fast food lunches he used to consume during his workday.

Although his dinners at home had always been relatively healthy -- stir fry or cooked vegetables with white rice -- Kirimoto would typically eat too much, sometimes consuming two or three meals' worth of food in one sitting.

"I would eat a whole bowl of rice or big servings of stir fry. I would eat 'til I was full, then you sort of become numb to the fullness," he said.

That changed as he started making a conscious effort to watch his portion sizes.

He remembers the intense feeling of withdrawal.

"My body really was asking for richer and fattier foods," he said.

1. Decide what you want to achieve. If you do not have a clear goal, you will not see clear results.

2. You may hit plateaus. That's when people may give up. Stick to it, you'll start seeing results again.

3. Determination and focus are key, but do not forget to release stress and reward yourself with a cheat day.

It was a struggle to resist delicacies like pizza and pasta, or even pantry staples like rice and bread. But the cravings slowly subsided and he noticed that even on his cheat day he was eating smaller portions.

At the start of 2011, Kirimoto began a fitness routine. He started lifting weights three days a week at the gym before work. It felt awkward at first, as he tried to get used to the rhythm of his body, but those feelings dissipated as he gained more energy and confidence.

Midway through the year, he incorporated running into his workout routine. He was now running and lifting weights five days a week. It was a momentous step for Kirimoto,who says he used to treat running like a joke.

"Unless I was being chased by a bear or axe murderer, it was never something I did," he wrote in his iReport.

By December 2011, he had dropped 81 pounds. But Kirimoto felt like his treadmill runs were getting him nowhere -- literally. "I just felt like a hamster on a wheel, the only thing missing was the water bottle," he recalled.

He told colleague Anja Snowden about his frustrations.

Snowden, a German-born Colorado transplant, is a fitness enthusiast. She is known around the office for using her lunch breaks at work to escape into the Colorado trails for a quick 30-minute run. She became a person Kirimoto confided in throughout his fitness journey, whether it was about struggles he had at the gym or nutrition advice.

"I am a big believer of eating food in its purest form," Snowden said. "He used to make fun of me when I ate an apple or vegetables for a snack, but as he started losing he changed his diet, and started eating pure, natural foods too."

When it came to running, Snowden told Kirimoto: "We live in Colorado. One of the most beautiful states with many trails, and you need to take advantage of it," he recalled.

That piece of advice inspired him to start running outside. The first run was tough. The ground wasn't as soft as the treadmill's belt back at the gym, and gravity seemed to pull him down, Kirimoto said.

What he didn't expect from running outside was the sensory overload. He had lived in Colorado for more than 25 years, and this was the first time he had run outside. The vibrant colors of the leaves, the green grass, the blue sky -- it hooked him. As soon as Kirimoto started running Colorado's trails, he fell in love.

Outside, he could finally breathe. His 15 minute runs transformed into 30 minutes and he gradually found himself running longer and faster.

By February 2012, Kirimoto ran his first 5K race. "I never entered a race before. I was alone and nervous. I had no idea if I was going to finish," he said. "When I crossed the finish line ... I felt so fantastic."

That year he did 10 races. At the end of 2012, he had shed a total of 94 pounds and was now running as far as 6 miles on his running days. The following year, he took his trail runs to a new level and joined a local running group.

In January of this year, he encouraged his wife and daughter to partake in physical activities as well. They had a day during the week where they would do short runs around the neighborhood, usually around a mile of jogging. Eventually those 1-milers with his daughter Sara became 2 miles; then she was regularly running 3 miles with him.

In March, the father-daughter-duo entered a 4-mile race in Denver. Sara, now 7, was nervous because she had never run more than 3 miles before. But that didn't stop her from crushing the race, Kirimoto said. Sara ran without stopping, clocking a 12-minute and 39-second mile pace.

My daughter tells me how much she likes the new me, and how she loves running with me.
Yusuke Kirimoto

Today, he and his daughter go on 6-mile runs together every Sunday. It's become a father-daughter bonding time for them.

"It is a million times more satisfying to run with her. To see my own child run and have fun is incredible," he said.

By July, Kirimoto's weight was down to 168 pounds. He has lost a total of 102 pounds since 2010. Through all his achievements, Kirimoto has inspired a lot of his closest friends and co-workers, Snowden said.

"I think everyone is very impressed," she said. "He made that choice for himself and for his family."

Passing that inspiration on to others is what motivates Kirimoto to continue staying in shape. "So many people supported and inspired me at the beginning of my journey. Inspiration is contagious and a continuous cycle."

For others trying to lose weight, Kirimoto says don't forget to enjoy the journey you're on. "Make (exercise) an exciting adventure," he said. "Everyone is different. Consistency is the key to both weight loss and fitness. You may not see results immediately, but keep at it and you will be rewarded."