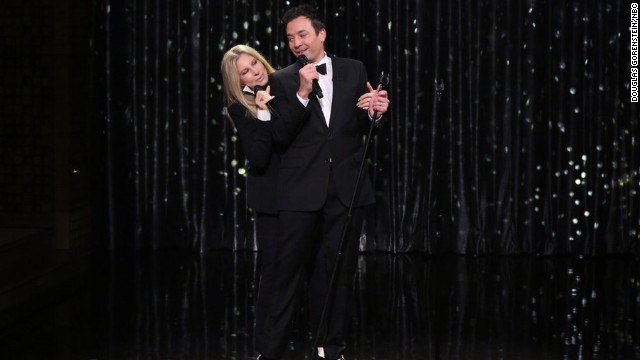 (CNN) -- Returning to late night after more than half a century earns you an entire evening for yourself.

At least it did for Barbra Streisand, who was the sole guest and musical act Monday night on "The Tonight Show With Jimmy Fallon." In honor of her appearance after a 51-year absence, Fallon insisted that Streisand sit in his host chair behind the desk.

"Let's be honest, you're never coming back here," Fallon joked. "This is special."

The legendary star -- who has been open about the stage fright that kept her from performing for years -- was on the show to promote her new album titled "Partners." The project is a series of duets with singers, including Blake Shelton, Michael Bublé and Stevie Wonder. There is even a virtual performance with the late Elvis Presley.

Fallon filled in for some of those partners Monday night as he sang a medley with Streisand. Later, he expressed his nervousness about having the star on the program given her reputation for being difficult.

"I thought you might be a nightmare, or a diva, but you were nice to everybody here," Fallon said. "You are allowed to be a diva. What did you do with Barbra Streisand?!"

The singer even Instagrammed a photo of herself getting makeup done for the show with the caption, "Last touches...getting ready for Jimmy. #thetonightshow."

As for how Fallon matched her pipes during their duet, Streisand jokingly deadpanned, "I wouldn't give up your night job," before saying that she and her husband, actor James Brolin, are big fans of Fallon and his show.