Realistic 'robo-hawks' designed to fly around and terrorize real birds 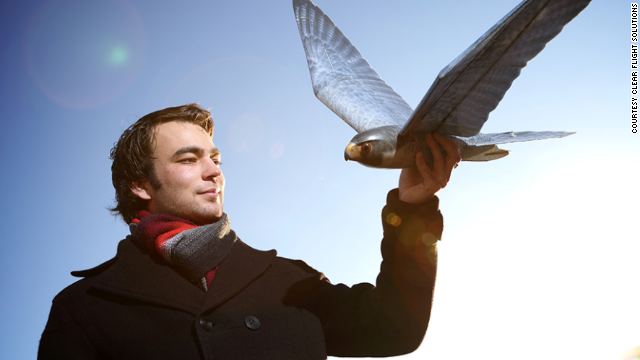 Founder Nico Nijenhuis with a robird. 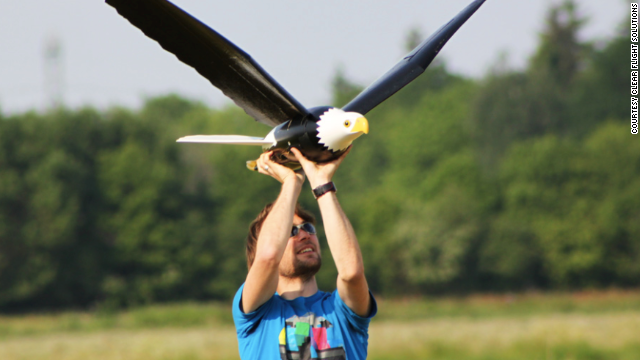 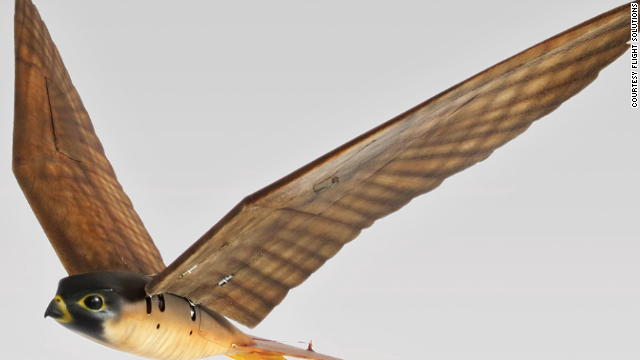 (Wired) -- Birds are nice enough, unless you work at places like airports, farms, and landfills, in which case they're the sworn enemy. Today, there are a variety of tools and technologies for spooking unwanted birds—we've graduated from scarecrows to flash-bang grenades and other sophisticated armaments—but Nico Nijenhuis is undoubtedly working on the coolest. He's building robot hawks that trick lingering critters into thinking they're about to get snacked on.

Nijenhuis, a 27-year-old based in the Netherlands, is the mind behind Robirds, a line of robotic birds of prey. He's hoping to sell them to the aviation and waste management industries under the name Clear Flight Solutions. (Company tagline: "We create birds." Fair enough!) Nijenhuis is currently testing remote controlled Peregrine Falcons and eagles with promising results. By the end of the year, he's hoping to have fully autonomous robot birds on offer.

Photos of unexpected shooting targets used by the world's armies

The endeavor got its start a few years back when Nijenhuis was a student of applied physics and fluid dynamics at the Technical University of Twente in the Netherlands. He was trying to figure out what to do for his Masters thesis and asked his adviser if there was an experimental project he might work on. The adviser grabbed a crude prototype of a mechanical bird off a shelf, handed it to Nijenhuis, and said, "Figure out how this works, and how to make it better."

The Difficult Problem of Flapping-Wing Flight

Creating machines that mimic birds might seem like a straightforward proposition, but it's not, in large part because we still aren't totally sure how birds work. "From a scientific point of view, we don't truly understand flapping-wing flight," Nijenhuis says. When wings are fixed, we're fine. We can run tests and calculate forces and as a result have been able to develop planes that take us all over the globe. "But the minute wings start moving, we really have a problem," Nijenhuis says. "It's all about very complex, three-dimensional flow. What a bird actually does is so complex that it's incredibly difficult to mimic."

With his Robirds, Nijenhuis had to figure out which parts of flapping-wing flight he could actually simulate. The big concept ended up being flexibility. Instead of just flapping from one joint like a rigid two-by-four, bird wings deform across their entire length as they move through the air.

For the Robirds, Nijenhuis complemented the basic hinging motion with a pitching motion on the wing tips--the further outward you go, the more the heavy-duty foam wings deform upwards and downwards. The result, when paired with some on-board sensors and sophisticated stabilization software, is a fairly convincing approximation of bird flight.

As far as the look goes, the Robirds rely on a 3D printed body, which comes right out of the machine with full falcon colors, modeled after photographs taken by the Clear Flight team themselves. The body is made of a glass-fiber nylon composite, which is both lightweight and rugged. "You can crash these things into the ground at 50 km/h and almost nothing will break," Nijenhuis says.

Up Next: Making the Robirds Autonomous

That's important too. In the early going, crashes were very much part of the process. The current version of the Robirds are remote controlled, and you have to be a fairly experienced RC aircraft pilot to fly them. The falcon model can fly up to 50 mph. But Nijenhuis and his team—currently a group of three Masters students and two researchers in robotics and mechatronics—are currently working on an autopilot system which they hope to finish by the end of the year. Robird handlers would be able to define a preset area in which the birds could fly, or draw out a pre-programmed flight path on a tablet app, hurl the thing into the air, and the birds would do the rest.

Why are we so fat? The multimillion-dollar scientific quest to find out

The Robirds are currently being trialed in the Netherlands. At one landfill, they've seen a 75 percent decrease in bird visits. The ones that do return have their heads on a swivel. They know there are predators about--which gets to the big selling point of Robirds. While flash bangs might scare birds, they're only short term measures. The birds often end up coming back. With Robirds, Nijenhuis says, "there's a natural reason for the birds to stay away."

The mystery of go, the ancient game that computers still can't win

I liked everything I saw on Facebook for two days. Here's what It did to me