Helping kids kick the pain and fear out of cancer 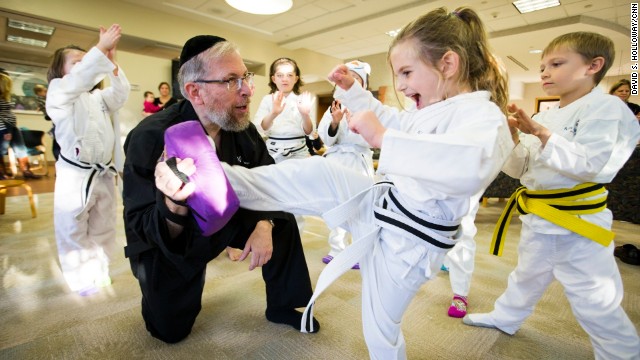 After witnessing the pain and fear that children with cancer endure, Rabbi Elimelech Goldberg founded a program that provides free martial arts classes so kids can learn to control their pain and feel powerful.

Goldberg, who has a black belt in Choi Kwang Do, founded Kids Kicking Cancer in 1999. He was inspired by his late daughter, Sara, who died of leukemia when she was 2. 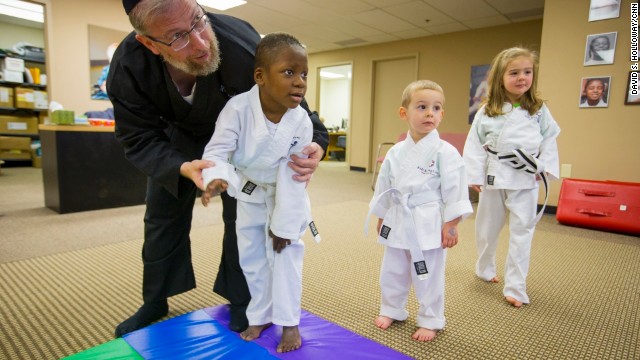 Goldberg teaches at the Kids Kicking Cancer Center in Detroit. 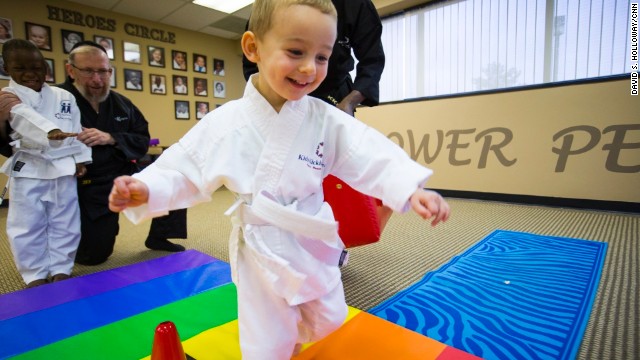 Goldberg's organization began in Michigan and has since expanded its programs to New York, California and Florida, as well as Canada, Israel and Italy. 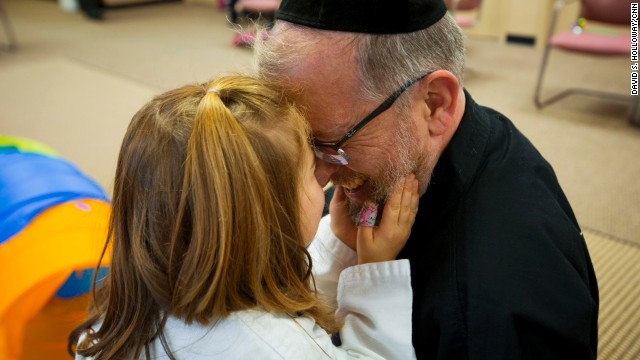 Goldberg's group provides individual support during hospitalizations and medical procedures. It also offers counseling and transportation to and from classes. 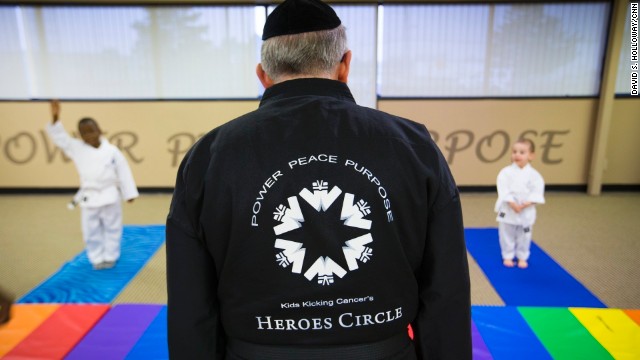 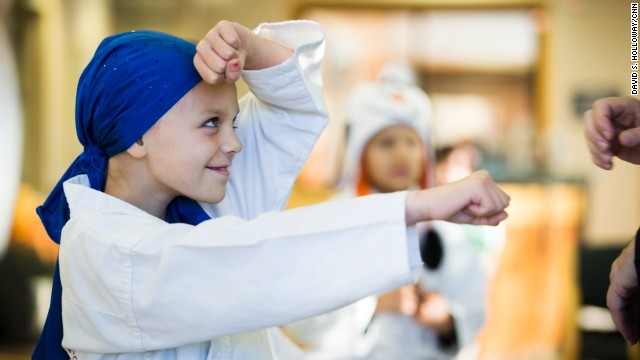 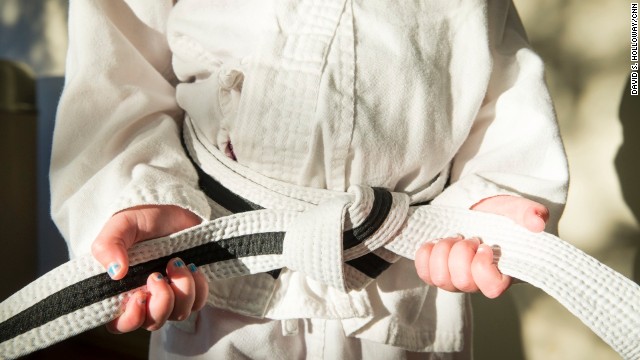 The classes focus on breathing techniques and meditation. 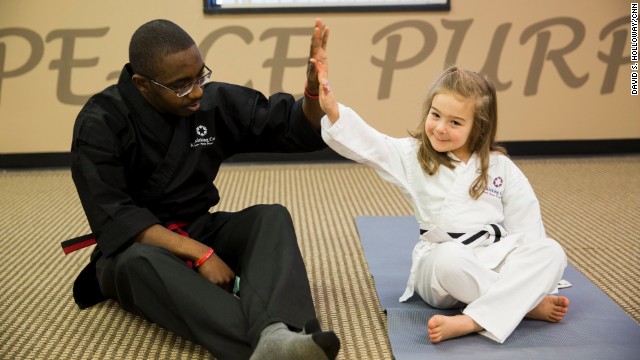 A student high-fives a teacher in Detroit. 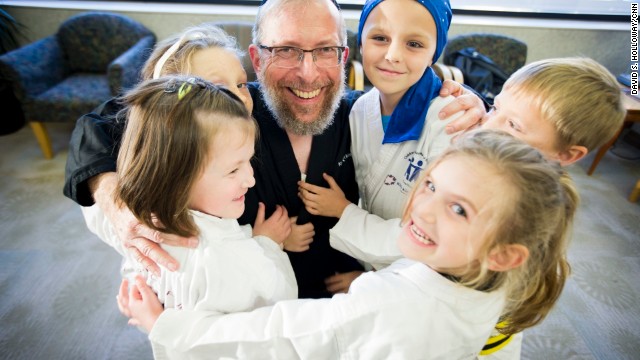 He often witnessed the pain and discomfort many of them endured while undergoing medical procedures.

"It's really indescribable, what it's like ... to watch a child go through so much pain," said Goldberg, who served as the director of Camp Simcha in New York. "The child looks at you for help and then you end up having to hold them down."

One day, he tried to soothe a young camper who was screaming in pain during treatment. Goldberg, a black belt in Choi Kwang-Do, offered to teach the 5-year-old boy some of the craft. 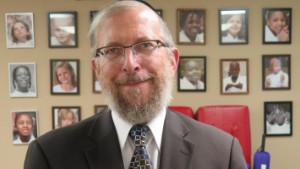 "In martial arts, you learn that pain is a message that you don't have to listen to," he said. "That lesson is so unbelievably effective."

Goldberg taught the boy some breathing techniques. When the nurse removed the needle after chemotherapy, he said the boy had hardly noticed.

Goldberg realized he was on to something.

"When we are able to breathe through pain and imagine the pain lowering," he said, "the brain has an amazing capacity to put us into a different place."

"When children get a diagnosis like cancer or any major disease, they lose any sense of feeling that they're controlling their lives. They're prodded and poked and touched, and they're often so afraid," Goldberg said. "We teach kids how to control their pain and make them feel powerful."

Goldberg knows what many of the children's families are going through.

His first child, Sara, was diagnosed with leukemia a week before her first birthday. Yet he was struck by his daughter's positive spirit during the emotional time.

In martial arts, you learn that pain is a message that you don't have to listen to. That lesson is so unbelievably effective.
Rabbi Elimelech Goldberg

"She was such an incredible little soul," Goldberg said. "After very painful treatments, she would give the doctors a kiss and thank them."

"She is our inspiration in everything that we do," Goldberg said.

Through classes and one-on-one support, Kids Kicking Cancer has helped more than 5,000 children and their families.

The group provides individual support during hospitalizations and medical procedures. It also offers transportation to and from classes, as well as counseling.

Haley Wallace joined Kids Kicking Cancer after she was diagnosed with cancer last year. The 9-year-old used to run for the door when doctors attempted to administer her treatment.

With tools 'children can face down fear'

Through Goldberg's program, Haley learned to control her fear and pain.

"The way I breathe in the light is, I think of all the happy thoughts. And then the way I breathe out the darkness is I think of the bad thoughts and blow them away," said Haley, who recently completed chemotherapy. "I do have the power to make the pain go away."

The program encourages children to teach what they have learned to other youths and adults experiencing sickness, pain or stress. Goldberg believes that when the children teach the breathing technique to others, the children find purpose in their lives.

"When they demonstrate (that) you can bring in the light and let out the darkness -- the pain, fear and anger -- it changes people," he said.

For Goldberg, instilling that sense of purpose is especially important for children at the end of their lives.

Before terminally-ill children pass away, his group gives black belts to them, organizing ceremonies with their family and friends. The ceremonies are sometimes held in big auditoriums filled with hundreds of people, or they may take place in small ICU rooms with immediate family crowded together.

"When we give children this black belt, we embroider the child's name on one side and the words 'master teacher' on the other, because they really are teaching the world," Goldberg said.

The organization began in Michigan and has since expanded its programs to New York, Los Angeles and Florida and internationally to Italy, Israel and Canada.

Want to get involved? Check out the Kids Kicking Cancer website at www.kidskickingcancer.org and see how to help.