Scotland will remain part of the United Kingdom -- along with England, Wales and Northern Ireland -- following a historic referendum vote. A majority of voters rejected the possibility of Scotland breaking away and becoming an independent nation.

With 31 of 32 councils declared, the "No" campaign has won the referendum on Scottish independence.

Scottish First Minister Alex Salmond admitted defeat in Scotland's independence referendum Friday -- and urged the rest of Scotland to do the same.

In a televised statement, he thanked Scotland "for 1.6 million votes for Scottish independence."A turnout of 86% is one of the highest in the democratic world for any such vote, he said.

Voters in Scotland made their choice Thursday -- remain part of the United Kingdom, or form their own independent nation. They chose to remain.

With 31 of 32 of councils reporting, the "No" campaign had garnered enough votes to secure their victory, and with it Scotland's continued place within the union.

The first councils to declare all went to the "No" campaign, as did the capital, Edinburgh, which voted overwhelmingly to stay in the union with 123,927 for "Yes" and 194,628 "No" votes. Argyll and Bute and Aberdeenshire also voted "No."

The majority of the early results have been going the anti-independence camp's way. The "No" campaign extended lead with Angus and East Dunbartonshire council results, alongside a landslide in Dumfries and Galloway. The oil-rich city of Aberdeen also strongly voted for the unionist camp.

The city of Dundee was the first big gain for the independence campaign, voting "Yes" with 53,620 votes for, 39,880 against.

The individual counts by local authorities are ultimately immaterial as it is the total number of votes countrywide that will determine the outcome.

Polls at more than 5,500 stations across all districts, from the remote highlands and islands to the big cities of Edinburgh and Glasgow, closed at 10 p.m. local time (5 p.m. ET). People still in line to vote at that time were allowed to cast ballots.

Turnout in Glasgow, one of the Yes campaign's heartlands, was a relatively disappointing 75%.

More than 4.2 million people registered to vote on the question: "Should Scotland be an independent country?" 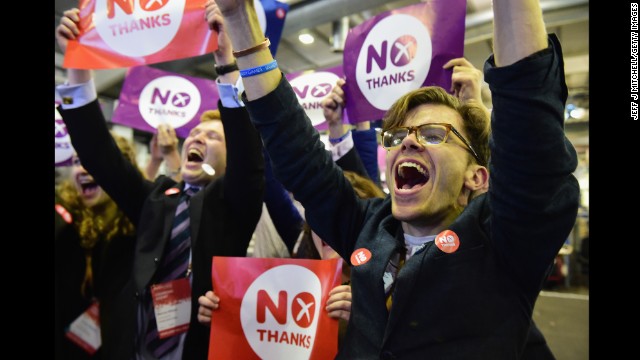 People opposed to Scottish independence celebrate the final results of a historic referendum Friday, September 19, in Edinburgh, Scotland. A majority of voters -- 55% to 45% -- rejected the possibility of Scotland breaking away from the United Kingdom and becoming an independent nation. 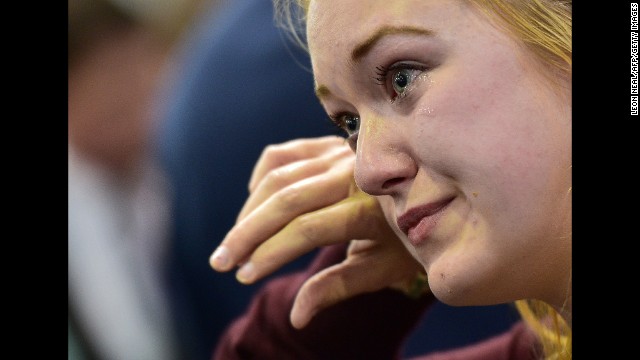 A supporter of an independent Scotland cries as referendum results are announced September 19 in Edinburgh. 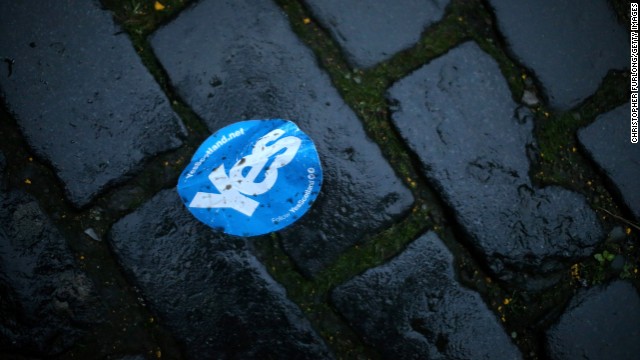 A discarded "Yes" sticker lies on cobblestones along Edinburgh's Royal Mile on September 19. 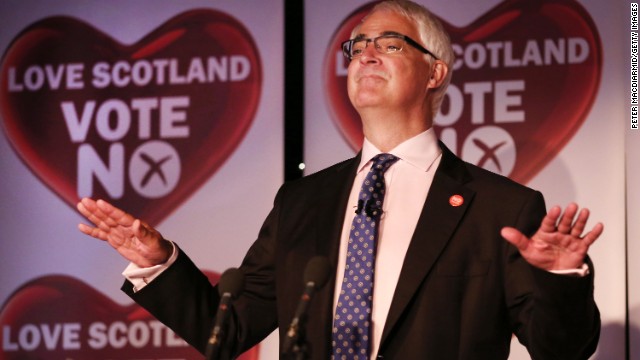 Alistair Darling, leader of the pro-union "Better Together" campaign, addresses supporters in Glasgow, Scotland, after the announcement of the referendum's final results September 19. 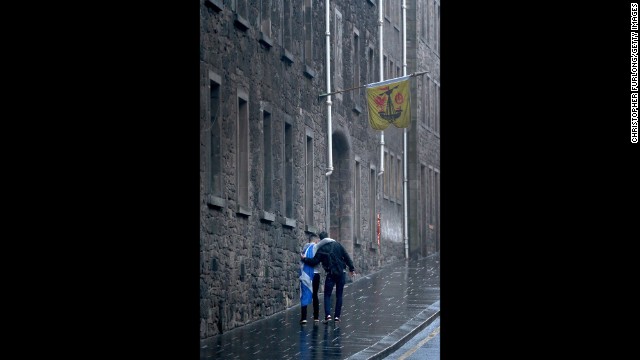 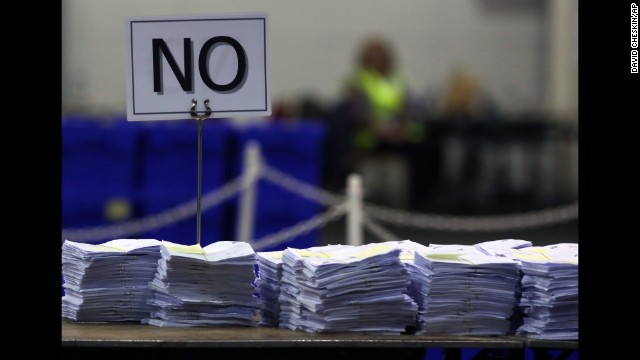 Ballots cast against Scottish independence get stacked on a table as votes are counted in Edinburgh on September 19. 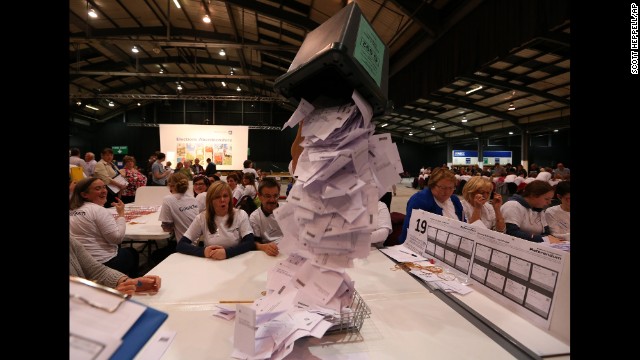 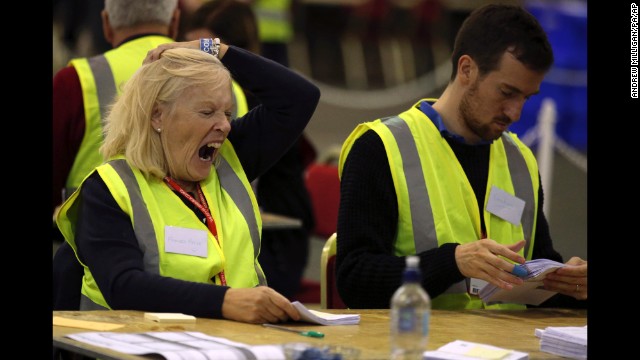 Ballot counting was tiring for staffers working through the night at the Royal Highland Centre in Edinburgh. 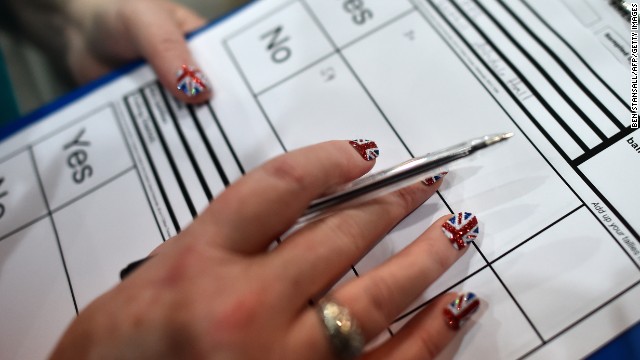 Ballot papers are counted in Aberdeen after the polls closed on September 18. 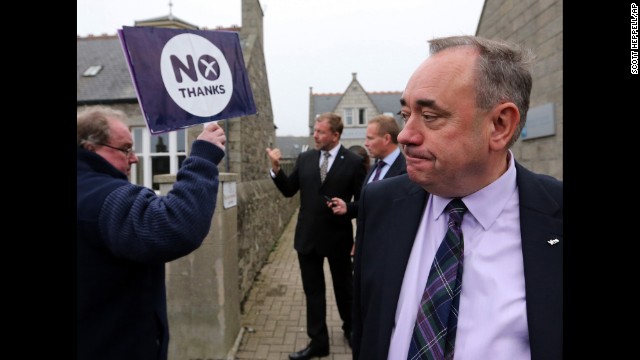 Scottish First Minister Alex Salmond passes an pro-union campaigner in Ellon, Scotland, on September 18. Salmond, leader of the independence movement, later accepted defeat and urged supporters to do the same. 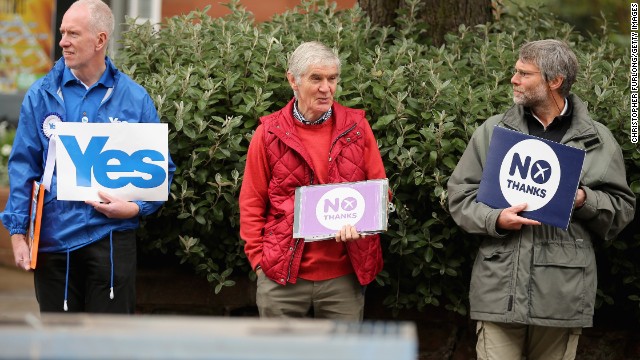 Campaigners on both sides of Scotland's independence referendum stand outside a polling station in Edinburgh on September 18. 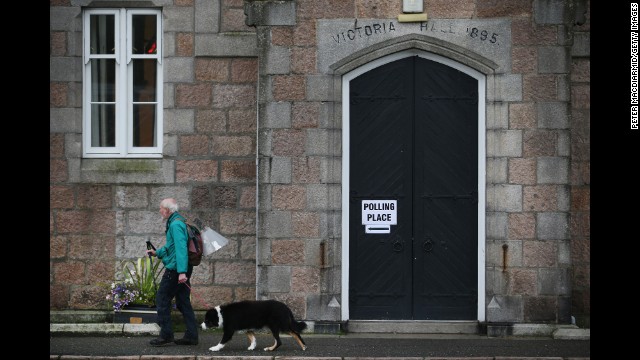 A man walks to a polling station to cast his vote in Ballater, Scotland, on September 18. 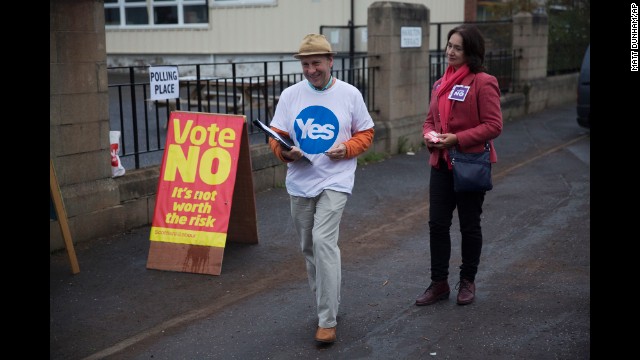 Campaigners stand outside a polling station in Edinburgh on September 18. 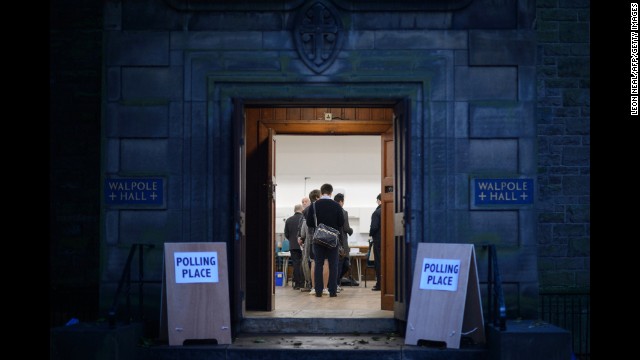 People wait to cast ballots inside a polling station in Edinburgh on September 18. 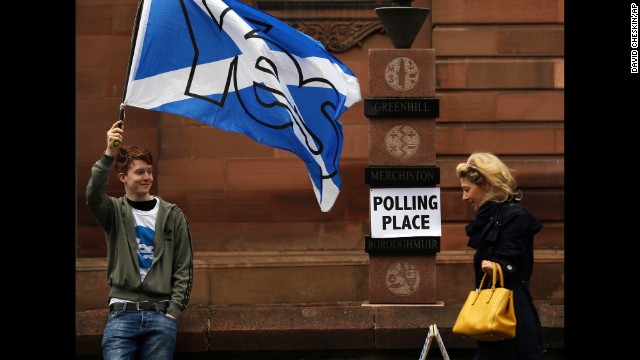 A voter arrives at a polling place September 18 in Edinburgh. 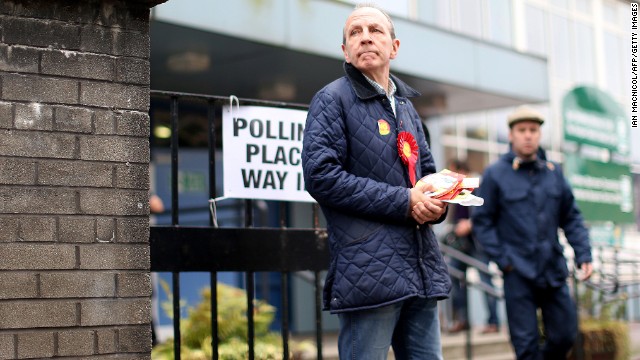 A pro-union campaigner distributes leaflets at a polling station in Glasgow on September 18. 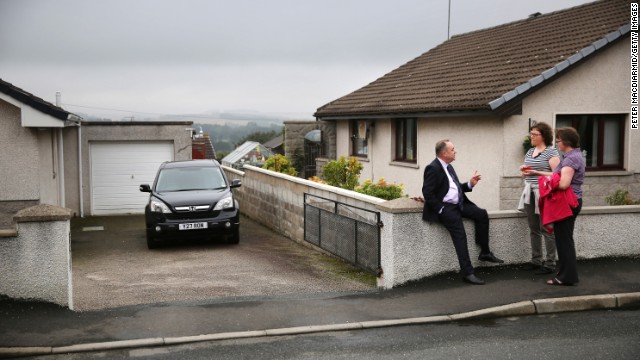 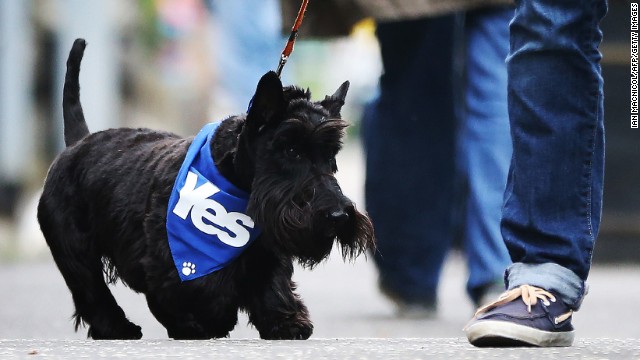 A dog wearing a pro-independence bandana walks down a street September 18 in Glasgow. 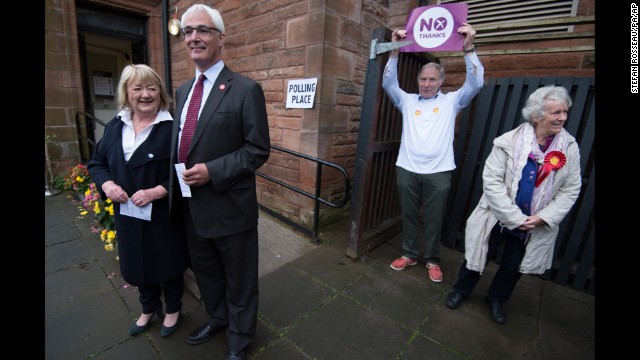 Darling, second from left, stands with his wife, Maggie, outside a polling station in Edinburgh on September 18. 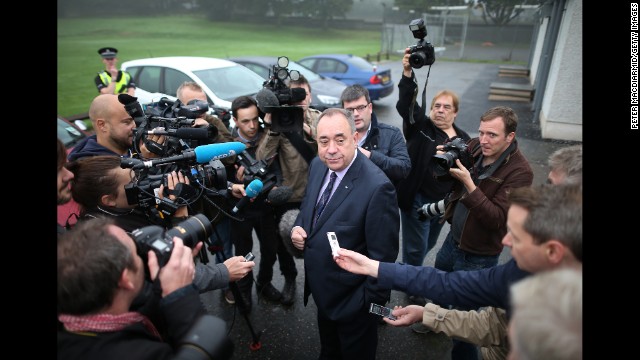 Salmond chats with reporters after casting his vote September 18 in Strichen, Scotland. 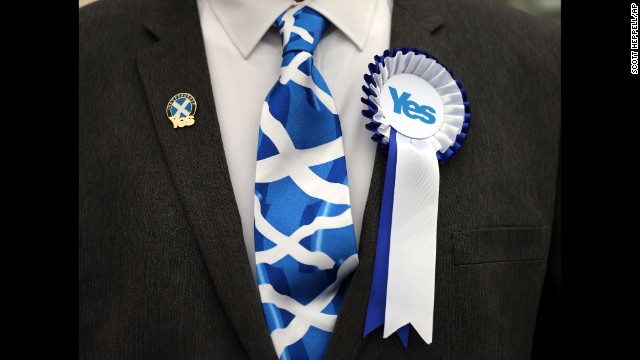 A pro-independence campaigner displays his message September 18 in Strichen. 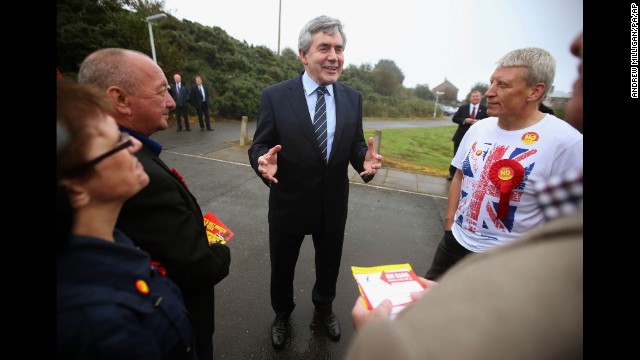 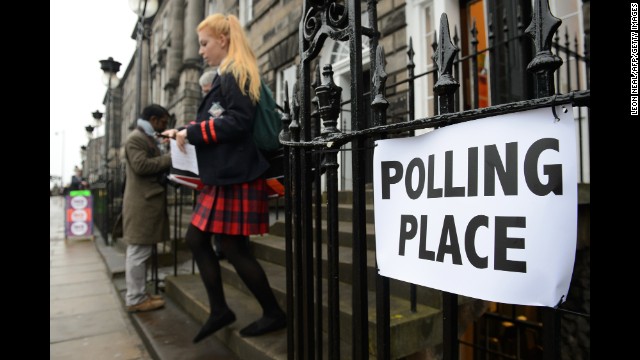 A young voter leaves a polling station September 18 in Edinburgh. 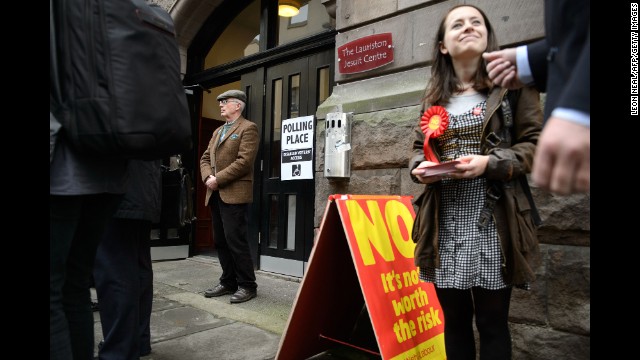 A vote for independence would mean Scotland, with its population of about 5.3 million, splits from the rest of the United Kingdom, made up of England, Wales and Northern Ireland, in addition to Scotland.

"The people of Scotland have engaged in this conversation," Phil MacHugh, a spokesman for the "Yes" camp, told CNN on Thursday night. "They have really gone out there, found out the information that they wanted to know, and made that choice today."

British Prime Minister David Cameron will make an address Friday morning. The content will depend on the outcome of the vote, but in the event that Scottish voters decide to stay in the union, Downing Street says he will refer to plans for further redistribution of powers from the central government to the Scottish Parliament, signed by Westminster leaders earlier this week.

The counting officer for Edinburgh, Sue Bruce, explained just after 10 p.m. that each ballot will be double-checked, to verify each voter's decision.

Addressing dozens of election workers, Bruce added, "I look forward to working with you during the course of the evening to deliver an accurate and transparent Edinburgh count in which you and the voters of Edinburgh can have full confidence."

READ: What you need to know

Voting was brisk at one polling station in Glasgow as the polls opened Thursday, with many people voting on the way to work or before taking their children to school.

Bad weather or the sheer volume of votes cast could slow down the counting process. However, the weather forecast appears good so far -- important when some ballot boxes must be collected by helicopter, plane or boat from polling stations on distant islands.

Allegations of voting fraud were reported by Glasgow City Council, with several instances of people turning up at voting booths in Scotland's largest city to vote, only to be told that they had already voted.

The Council stressed that there was never actually a situation of double voting and the affected ballots are now being searched for and taken away.

Labour lawmaker Alistair Darling, who has headed the pro-union "Better Together" campaign -- backed by the main parties in Westminster -- voted in Edinburgh, while former Prime Minister Gordon Brown, another pro-union campaigner, voted in the town of Kirkcaldy.

For the first time, the vote was extended to 16- and 17-year olds living in Scotland. Nearly 110,000 people younger than 18 have registered to vote.

Voters in the referendum did not have to be British citizens; Commonwealth, Irish and EU citizens who live in Scotland and are registered to vote there can cast a ballot. However, Scots living outside Scotland do not have a say.

Nearly 790,000 people applied for a postal vote -- the largest volume of registration for postal votes ever in Scotland.

After the polls closed, Salmond tweeted, "This has been a remarkable day. Scotland's future truly is in Scotland's hands."

Scotland will remain part of the United Kingdom -- along with England, Wales and Northern Ireland -- following a historic referendum vote.
Why 'No' vote will relieve UK allies
updated 5:17 AM EDT, Fri September 19, 2014

First Minister of Scotland Alex Salmond gives his concession speech as Scotland rejects independence from the U.K.
What 'No' means for David Cameron
updated 6:49 AM EDT, Fri September 19, 2014

David Cameron has had the narrowest of political escapes. Success for the "Better Together" campaign has saved him from catastrophe.
Are these the world's sexiest accents?
updated 8:00 AM EDT, Thu September 18, 2014

The Scots are talking a lot this week -- perhaps you've heard a little something about an independence referendum -- and that makes us happy.
Scotland votes: See the TV ads
updated 6:10 PM EDT, Wed September 17, 2014

As Scots vote on independence, these are the advertisements they're seeing on TV.
5 inspired secessionist movements
updated 10:53 AM EDT, Fri September 19, 2014

The country is not alone: From Belgium to China, separatists are looking to break away.
Scotland: 10 fun facts
updated 7:05 AM EDT, Wed September 17, 2014

Scotland by the numbers: 10 interesting facts you didn't know about the country.
iReport: Stunning Scotland
updated 5:54 AM EDT, Tue September 23, 2014

"I was immersed in green. Everything was green. And the air -- the air was crisp and clean and just seemed to have more oxygen in it."
What's the deal with the UK?
updated 9:48 AM EDT, Wed September 17, 2014

Scotland, England, the United Kingdom, Great Britain: How do they all fit together?
Quiz: How Scottish are you?
updated 5:03 AM EDT, Thu September 18, 2014

When do you eat your tea? Is it driech outside? Test your Scottishness here.