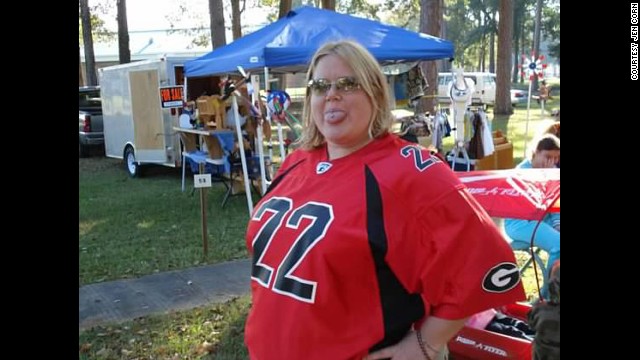 In October 2011, Jen Corn began a life-altering "road trip," facing the reality she had denied for years -- her obesity. Corn started her journey at 311 pounds. 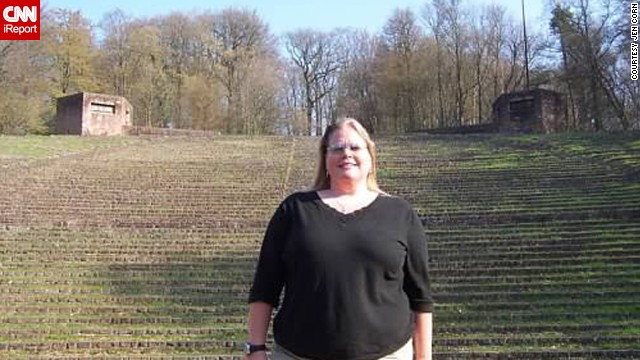 Corn began gaining weight in high school, and the problem continued throughout her 20s and 30s. 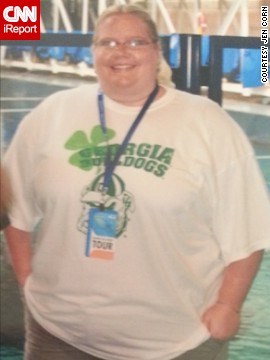 A March 2011 photo taken at the Georgia Aquarium in Atlanta shocked her. "When I got the pictures back, I told my friend, 'I want you to burn this picture,' " Corn said, realizing she was indeed the person in the photo. Later that year, her mom and aunt offered to pay for her to have weight-loss surgery. 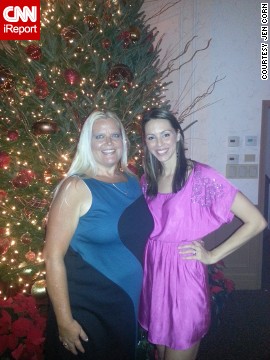 Instead of having surgery, Corn started back on the Weight Watchers program. About a year later, she attended her company Christmas party. "I was somewhat comfortable in my own skin" at the time, she told CNN in an email. 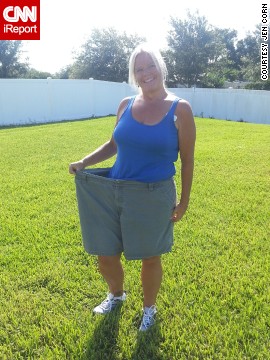 Corn had tried Weight Watchers in 2008 after attempting multiple other diets. She stuck with the program for less than a year. When she started again in 2011, her mind-set was completely different. She made a commitment to pay attention and listen closely in meetings and adhere to the plan. The shorts she's wearing here in July 2013 are the same ones she wore in the March 2011 photo on the aquarium visit. 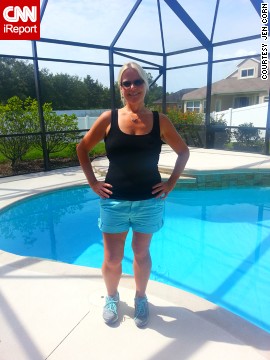 At 5 feet 6 inches, Corn weighed more than 300 pounds. Her mother and aunt had just offered to pay for her to have weight-loss surgery. But Corn knew the price tag was hefty: around $15,000.

"I told them no," said Corn, then 39, recalling the exact moment. "I felt like I was not worth that."

Her mom, Jean Corn, said the two older women knew something had to be done since diabetes runs in the family.

"We were just desperate," Jean Corn said. "We (also) knew her heart wasn't going to be able to carry this weight forever."

Corn's rejection of the offer devastated her family. But Corn had made up her mind to take matters into her own hands to lose the weight.

Corn's weight problem had begun in high school in Woodstock, Georgia. She played sports, which helped her feel like she hid some of the weight, but she said she ate everything in sight.

"There were a lot of self-esteem issues growing up, which of course only added fuel to the fire to make it worse," she said.

She wouldn't address her weight with anybody. She got into fights with her mom about it; at one point, she told her mom never to mention it again. She avoided shopping, scales and mirrors.

In 2011, she realized she couldn't walk from her front door to her mailbox, a distance of 30 feet.

"I'd get to the mailbox sounding like I smoked 12 packs a day," she said, recalling how she complained about pain in her knees, back and feet. "It was ridiculous."

In 2008, Corn had tried the program, an attempt that lasted six months. She had also failed at other diets -- Nutrisystem, the South Beach Diet and Sugar Busters among them.

But this time, her resolve to get healthy was strong.

Corn joined Weight Watchers shortly after the talk with her mom and aunt. This time around, her mind-set was different. She had made a commitment to herself to go to the meetings, pay attention and adhere to the plan. She had heard the plan would work if she followed it precisely.

Shortly after joining the program, Corn saw something at the doctor's office that would end up changing her life.

She went to see the doctor about her foot hurting. A note written on her chart classified her as morbidly obese. Corn was not even sure what the term meant.

"He told me it was because I was heavy and offered me tips on what to do for my foot but not about how to lose weight," she said.

Corn persevered. She attended her weekly Saturday morning meetings without the dread she had in her 2008 attempt. Instead of focusing on her goal of losing 150 pounds, the Bradenton, Florida, resident attempted to achieve smaller goals like 5, 10 and 25 pounds.

The first six months of her weight-loss journey, Corn focused strictly on her diet. After she had lost about 40 pounds, she started walking the neighborhood in addition to using her treadmill at home.

"It was kind of like a snowball effect," she said. "I was losing more weight, which caused me to exercise more."

"Before I knew it, I was not eating as much food as I used to," she said. "It was a slow process, so my body had time to adjust to less food."

Her daily diet before had been filled with fast food, fried chicken and little vegetables. Now it's all about high-protein and high-fiber foods, salads and healthy snacks.

And, of course, lots of water throughout the day.

"I do allow myself a piece of chocolate here and there, some ice cream here and there, as long as I pre-arrange for it in my mind," she said. "I would feel deprived if I couldn't have those, and then that's usually when I go completely off the rails."

One step at a time

Corn hit her goal weight of 163 pounds in March. Now, almost three years after the start of her journey, Corn weighs 161 pounds. She struggles every day, keeping healthy snacks around her at all times.

She blogged about her weight-loss journey, which she refers to as her "road trip."

Corn has a message for others facing their own weight problems.

"First, you don't have to have a movie-star budget to do this," she said. "It won't be easy, but it's your life you're dealing with, and there's nothing more precious on this earth than your own life."

An avid power walker, Corn walks five miles a day. Her goal is to walk a half-marathon in Sarasota, Florida, in March.

Her self-confidence has also increased as a result of the "new" her.

"I'm still kind of shy, but I'm not afraid to walk up to somebody and talk to them, as opposed to standing back and waiting for them to come talk to me," she said.

And her mother couldn't be prouder.