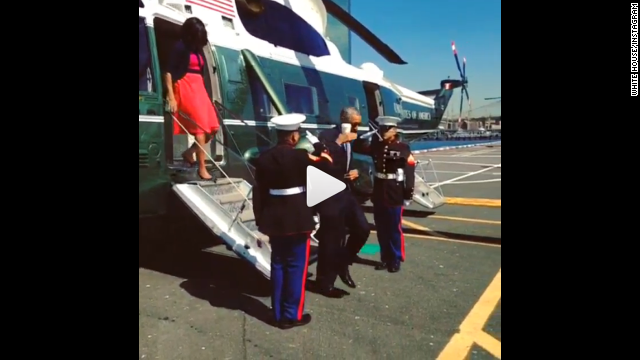 (CNN) -- With a coffee cup in hand, President Barack Obama offered a less-than-formal salute Tuesday to a Marine standing guard as he exited the presidential helicopter, Marine One.

The White House Instagram account posted video of the brief scene, highlighting the President's arrival in New York for the U.N. General Assembly.

But some critics quickly pounced on the President's coffee cup salute.

"Wait - did President Obama just salute the Marines with a LATTE in his hand?!" the National Republican Congressional Committee tweeted.

It's become tradition for presidents to salute the military officers he encounters when boarding the official helicopter, a tradition that is widely understood as begun by President Ronald Reagan in 1981.

A U.S. Navy manual on customs and courtesies, cited by the Daily Caller, says saluting in general is "the most important of all military courtesies."

"The salute formally recognizes the officer as a military superior, and returning the salute expresses the officer's thanks for the junior's support," the manual reads.

It recommends not saluting when one is "carrying articles with both hands or being otherwise so occupied as to make saluting impractical." 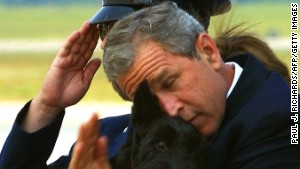 But Obama has previously passed by a Marine without saluting -- and that got noticed as well.

And former President George W. Bush did an awkward salute with his dog back in 2001.

So what do you think? Was Obama's coffee cup salute a sign of disrespect, or a non-story?