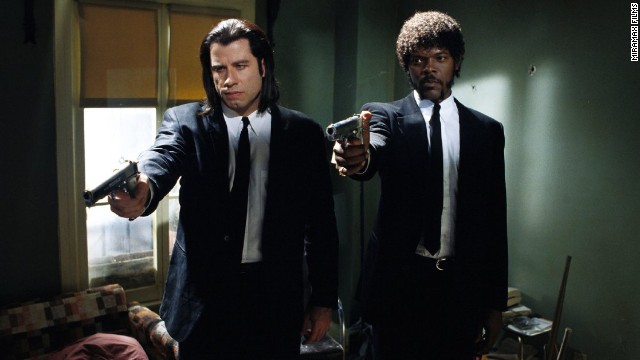 Say what one more time! From its premiere in September 1994, "Pulp Fiction" has been a treasure-trove of quotes, a fan favorite and a star vehicle for John Travolta and Samuel L. Jackson, who play Vincent Vega and Jules Winnfield, respectively. Here's a look back at some of the film's memorable scenes: 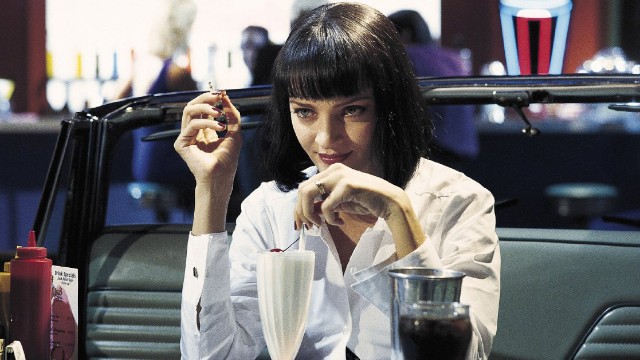 From "The Fox Force Five" failed TV pilot to a heroin overdose, Mia Wallace (Uma Thurman) is the reigning queen of the film. 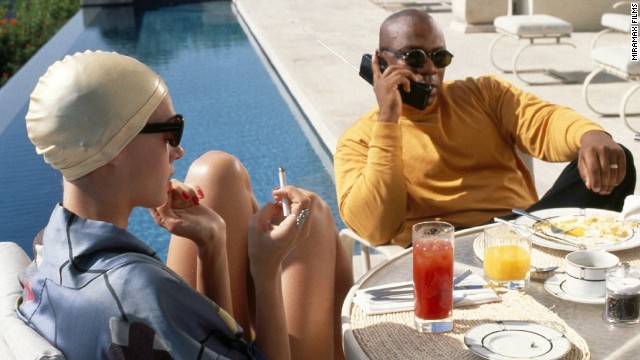 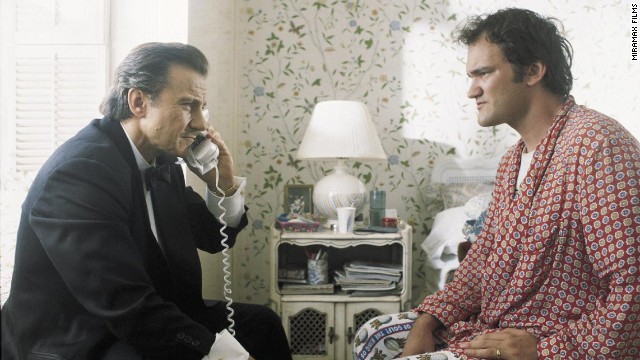 Harvey Keitel plays Winston "The Wolf" Wolfe, a fixer. Here he appears with the film's writer-director Quentin Tarantino, who plays Jimmie Dimmick in the movie. 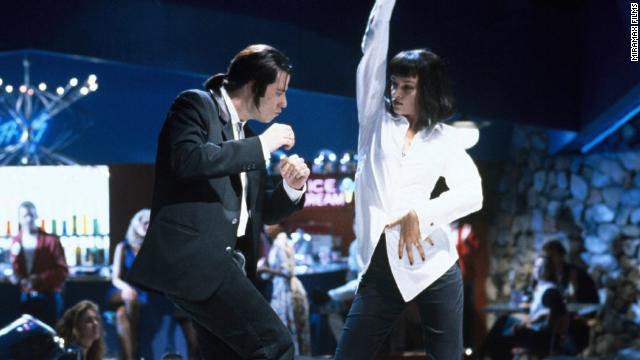 "Pulp Fiction" revived the career of John Travolta, who had faltered in Hollywood after becoming a pop culture phenomenon in films such as "Saturday Night Fever" and "Grease." He revisits his dancing skills in the Tarantino film in this scene where he takes Thurman out for a night on the town. 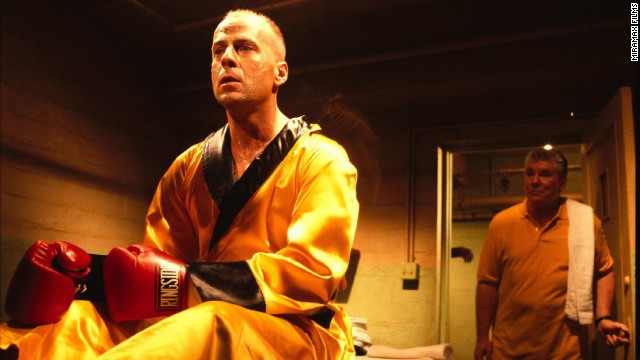 Bruce Willis plays boxer Butch Coolidge, who runs afoul of Marsellus Wallace and will do anything to get his watch back. 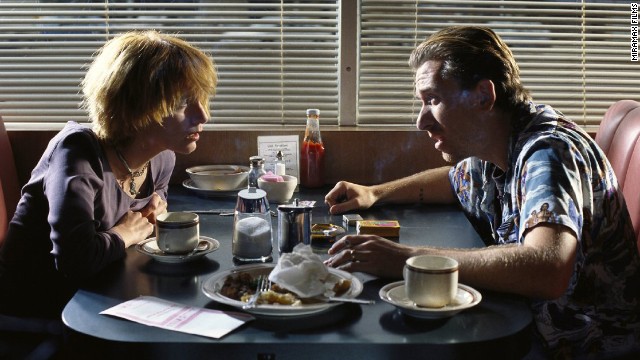 Amanda Plummer and Tim Roth play robbers Yolanda and Ringo, aka "Pumpkin" and "Honey Bunny," whose run-in with Jules and Vincent is pivotal. 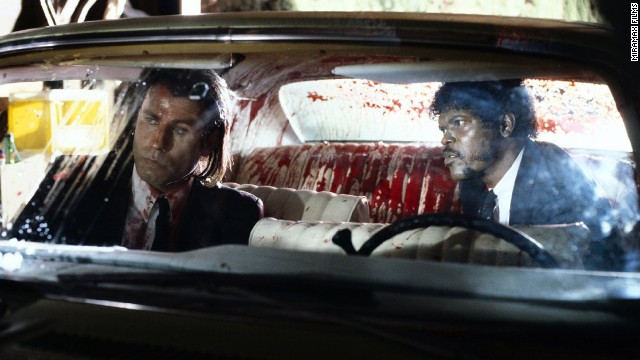 (CNN) -- Quoting Ezekiel 25:17 from "Pulp Fiction" will likely get you laughed out of Sunday school class.

In the film, Winnfield speaks these words to people before he kills them: "The path of the righteous man is beset on all sides by the inequities of the selfish and the tyranny of evil men. Blessed is he who, in the name of charity and good will, shepherds the weak through the valley of the darkness. For he is truly his brother's keeper and the finder of lost children. And I will strike down upon thee with great vengeance and furious anger those who attempt to poison and destroy my brothers. And you will know I am the Lord when I lay my vengeance upon you."

Scripture isn't the only thing writer-director Quentin Tarantino took creative liberties with for the film that opened in theaters on October 14, 1994. In honor of "Pulp Fiction's" 20th anniversary, here are 20 fun facts about the movie that still reigns as one of the greats:

1. Vincent Vega's trips to the bathroom

Potty breaks are bad news in this film. Whenever John Travolta's character, Vincent Vega, takes a powder, tragedy occurs. During his three bathroom breaks, Mia Wallace (played by Uma Thurman) overdoses, the restaurant where he and Jules are dining is held up, and Bruce Willis' Butch Coolidge gets the drop on him.

The F-word is used 265 times in the movie. Go ahead and count it.

Fueled by the money he had made from his film "Reservoir Dogs" and the deal he had for "Pulp Fiction," Tarantino took off to Amsterdam to write the latter. According to Vanity Fair, "He bought school notebooks and declared about one of them, like a modern-day Hemingway, 'This is the notebook in which I am going to write Pulp Fiction.' "

He ended up filling several notebooks.

Tarantino got a lot of use out of the Honda Civic that Butch drives in the film. It's the same car Pam Grier drives in the title role of "Jackie Brown," and appears in a parking lot scene in "Kill Bill: Volume 2."

5. Oops with the coat

At the beginning of the now-infamous overdose scene, Mia is wearing Vincent's coat. Moments later she goes to light a cigarette and is no longer wearing it. The coat magically appears back on her once the cigarette is lit.

6. Robert Redford could have starred

Ronnie Yeskel, the film's casting director, told Flavorwire that unlike on "Reservoir Dogs," Hollywood agencies "were pitching Robert Redford and Dustin Hoffman and Bruce, Bruce Willis -- just the biggest names in the business that you could imagine."

"And we're sitting there in these rooms with all these suits, and they all look alike, and we're like kids in a candy store," Yeskel said. "We couldn't believe they were pitching these people to us."

Ellen DeGeneres tried out for the role of Jody, the pierced face wife of Vincent's drug dealer, that ultimately went to Rosanna Arquette.

Blink and you may miss her, but comedian Kathy Griffin appears in the scene where bad guy Marsellus Wallace and Butch collide. Griffin has said she used to date Tarantino. Steve Buscemi, who now stars in "Boardwalk Empire," also made a cameo as the Buddy Holly waiter at Jack Rabbit Slim's.

The scene where Travolta's Vincent plunges a needle into the chest of Thurman's Mia to revive her from an overdose using adrenaline was filmed with Travolta pulling the needle out of her and then the film was run backward.

Producer Richard Gladstein told Vanity Fair that when Jackson did his second audition for his role he showed up with a burger and fries -- key props in one of the film's pivotal scenes. The actor proceeded to consume the meal so menacingly that Gladstein said, "I thought that this guy was going to shoot a gun right through my head."

One of Tarantino's friends, a recovering heroin addict, advised Travolta on how best to portray a man riding that horse. He told the actor that getting drunk on tequila while relaxing in a hot bath would closely approximate a heroin high without him actually having to do the drug.

The director didn't have to look far for one of the film's most memorable props. Jules' wallet, which had "Bad Mother F****r" written on the front of it, actually belonged to Tarantino.

When Captain Koons (Christopher Walken) tells a young Butch the story about the gold watch that was a family heirloom, he refers to a soldier named Winocki who transported it. Joe Winocki was the name of a character in the 1943 film "Air Force," directed by Howard Hawks, one of Tarantino's personal heroes.

No one else could have played the man who specialized in messy cleanups: Tarantino reportedly wrote the character of Winston "The Wolf" Wolfe specifically for Harvey Keitel.

If Fabienne's line, "Any time of day is a good time for pie," sounds familiar, it should. The character of Alabama says the same thing in another Tarantino film, "True Romance."

There have been countless theories about what was in that mysterious briefcase that Jules and Vinnie had to protect -- with everything from gold to Marsellus' soul being suggested. But Tarantino has said in interviews that it's whatever fans choose it to be, though he has also had fun with fans promising a "reveal."

17. Keeping it in the family

Travolta's character, Vincent Vega, is the brother of Vic Vega, aka Mr. Blonde, from Tarantino's "Reservoir Dogs." Michael Madsen played the character in that film.

18. The meaning of the Band-Aid

Marsellus sports a Band-Aid on the back of his neck for a reason: It covers up a scar actor Ving Rhames had.

The audience is led to believe that Vincent and Mia won the dance contest at the Jack Rabbit Slim's restaurant. But late in the film, when Butch is returning to get his watch, there's a radio bulletin about the trophy having been stolen.

"Saturday Night Live" alum Julia Sweeney had a bit role in "Pulp Fiction" as a junkyard owner and The Wolf's breakfast date, Raquel. In real life, she had been married to Stephen Hibbert, who played The Gimp in the film.