Life in the fast lane with South Africa's 'titanium woman'

(CNN) -- In the largely male-dominated world of the motorsport, South African super bike racer Janine Davies is an anomaly.

"They still can't seem to grasp the concept that 'hey listen, we are as good as you," laughs the 26-year-old Cape Town native.

"We're all there to achieve the same goal: Get to the checkered flag, and beat you."

So far, Davies' ambition has served her in good stead. She is currently the first South African woman to compete at the South African National Championships on a 1000 CC motorbike.

Despite her many accomplishments, Davies' introduction to bike riding wasn't smooth. She actually crashed in her first race at the Derby Development Series. But then, she'd only learned how to ride the week before. Still, she wasn't put off by the accident -- which fortunately only resulted in a few scrapes.

"It was actually hilarious because the first race went amazing. I loved it," she recalls.

"I came back to the pit and was like 'Oh my first crash, look at my scratches!'"

Davies was less fortunate in 2007, when she crashed into a tire wall during a race that nearly ended it all.

"It was my first race for the season and my mum was very nervous," recalls Davies.

"The tire wall is there for safety, but unfortunately I tried to protect my bike. So it was kind of like: tire wall, me, bike and I was just lying there."

As a result of that accident, Davies fractured her neck, ribs, sternum and hand. When she was rushed to the intensive care unit, doctors also found blood in her lungs. She needed a lot of patching up.

"I've got titanium all over my body," she concedes.

During that time, she admits she started to rethink her career.

"I said to my parents: 'No way, I don't want to go through this again,'" she says. When her doctor came in to explain one of her surgeries, however, she found she couldn't focus on his words. 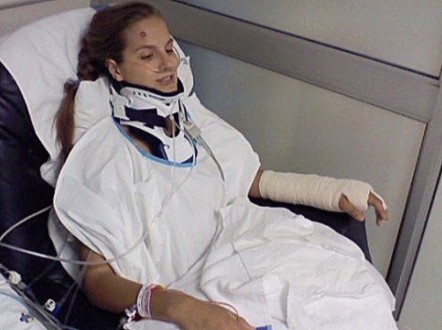 Despite the seriousness of her crash, Davies found her passion for the sport was too strong to let her quit.

"You forget about what you've gone through and you just kind of want to go back to it, especially when you haven't done what you want to do yet," she says.

Helping the next generation of riders

Today, Davies is back on her super bike and soaring up the ranks. She's competing at the national level. This year, she debuted in the SuperM championship series, and won third place at the Phakisa Freeway in March.

She is also trying to open the sport up to women. Her ambition is to one day manage a team that includes more speed-racing femmes.

"There are a lot of young women in racing at the moment at a regional level. I want to grow them," she admits.

READ: How to cycle like a Tour de France winner