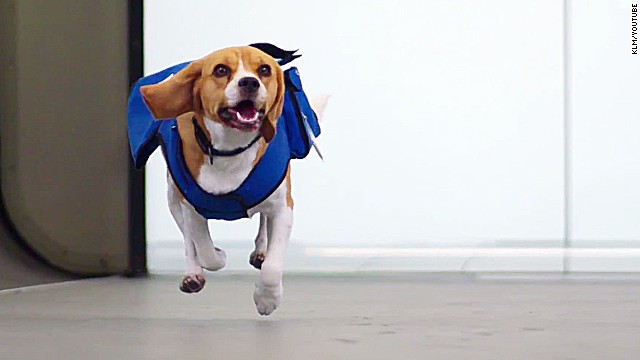 (CNN) -- UPDATE: We all know the old saying about things that seem too good be true ... but sometimes we get pulled in by golden ideas anyway.

Such, it seems, is the case with KLM's "lost and found" dog, Sherlock. It appears that the Sherlock video is nothing more than a marketing stunt to promote the airline's new lost and found service.

"The dog Sherlock symbolizes the service we are offering to our customers," a KLM spokesman said in an e-mail to CNN. "It shows the effort and dedication of our Lost & Found team."

Whoever that beagle is, we still love him/her. Even if, to quote another old saying, that dog don't hunt.

Warning: After seeing this achingly adorable video of KLM's newest employee in action you might be tempted to leave your gadgets behind on your next flight into Amsterdam.

"We train for muscle strength, endurance and, of course, socialization," says Dirk Van Driel, Sherlock's trainer, in a video about the dog, which has been viewed more than 2.7 million times since it was posted to YouTube Tuesday.

"When you see the reactions of the passengers, that really is amazing."

Judging by the collective "awww" that rings out through the arrivals hall as Sherlock uses his remarkable sniffing powers to track down the owner of a forgotten iPhone, the dog is a hit.

"He can really do something no one else can"

"And he can really do something no one else can."

Perhaps the most famous is the Beagle Brigade -- made up of teams of dogs that inspect luggage for restricted agriculture at U.S. airports.