How a coral farm in the desert could help 'grow bones'

(CNN) -- Far from the sea, a man-made coral reef is taking shape -- and it could change medical operations forever.

Step inside the OkCoral lab in Israel's Negev Desert and you'll find row after row of quietly bubbling fish tanks, each containing a precious substance.

It is hoped the coral grown in this surreal "farm," could one day be used in bone operations -- encompassing everything from dental implants to spinal procedures.

Unlike animal and human bones, coral can't be rejected by the body, say medical experts at the company CoreBone, which manufactures bone replacements from coral.

Grown in the lab, this coral is also free from the diseases you might find in the oceanic variety.

Assaf Shaham founded the unusual laboratory six years ago at a cost of $2.5 million, with an ambitious vision of tapping into the billion dollar worldwide bone grafting industry.

But first he'll need the approval of authorities in the European Union and U.S., with a decision expected next year.

The father-of-two's dedication to the business is astounding -- if not a little disconcerting.

"In six years of growing corals, I haven't left these four walls for more than 12 hours -- not even once," he said.

"For me, it's 100% learning as I go. I take the mother colony, and I cut off a branch of the coral with a diamond saw. Then I glue it to another base made out of cement." 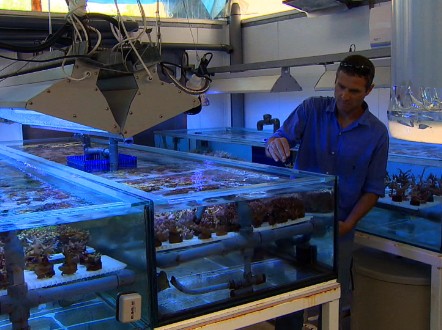 The delicate ecosystem needs constant care to ensure the water's salinity, temperature, and chemical make-up is perfect -- any variations and the coral could die.

The fish swimming around each tank are essentially the "worker bees" of the artificial reef. They eat the algae growing on the coral, their feces helps feed the coral, and finally, their movements in the water keep the coral strong.

And much like the traditional canary in the coalmine, if the fish die, you know something's not quite right in the water.

Happily for Shaham, his ambitious experiment appears to be thriving, with coral in the lab growing at ten times the normal rate.

Just a small container of the coral costs roughly $5 to $10 to produce, and sells for around $250.

We don't have to worry that in several years, harvesting from the sea could be forbidden
Ohad Schwartz, of company CoreBone

One of the biggest benefits of the business is its environmental sustainability.

"We have a constant supply," says Ohad Schwartz of company CoreBone.

"We don't have to worry that in several years, harvesting from the sea could be forbidden."

It's a concern they'll never have to think about, when harvesting these remarkable fruits of the desert.

Insight: Making wine in the shadow of war

Read: Abu Dhabi super mall -- Build it and they will come?