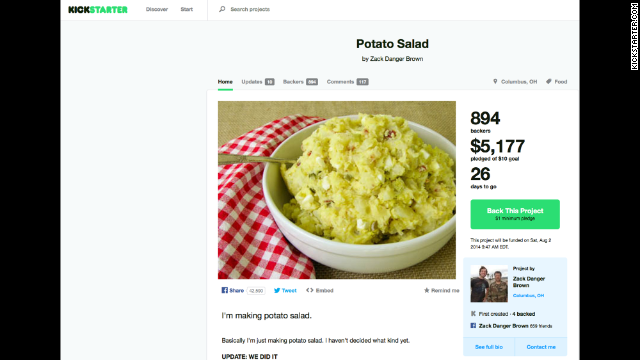 (CNN) -- Potato salad is a cause worthy of charitable donations.

That notion started out as a joke in early July, when Zack "Danger" Brown opened a Kickstarter campaign requesting $10 in crowdfunding to make his very first batch of it.

Man raises thousands to make this?

But the joke was on him, when an Internet mob pounded him with a sum far beyond his goal -- $55,492. On Saturday, he spent it on a public party in a city park in his hometown of Columbus, Ohio, to benefit charity.

He says he won't personally pocket any of the loot.

The Internet storm also whisked Brown into an overnight sensation. The raging speed of donations snagged the attention of "Good Morning America" in a few days' time.

The newly minted fund-raiser popped by ABC's morning show studio in shorts and sneakers with no socks, and showed off a cheap T-shirt with homemade iron-on lettering that read, in all caps: "I JUST BACKED POTATO SALAD."

"At Day One, we had $200. I thought that was way too much money," he told the show. He confessed that he had not yet made any potato salad but said he'd received many recipes through the Internet -- from mayo-daubed to vinegar-splashed concoctions.

Brown's bewilderment over the sum didn't stop him from handily hoisting the fund-raising bar much higher. He pledged prizes for various levels of donation: A bite of the potato salad for those contributing $3. A hat for a contribution of $25. A T-shirt for $35.

While the money came in streams, visitors to his Kickstarter page arrived in deluges, tallying more than 4 million views. It ranks No. 4 on the website for all-time visits, according to Kickstarter.

Potato salad weighs in ahead of actor LeVar Burton's Reading Rainbow, which ranks eighth, and the Oculus Rift virtual reality headset, which ranks 10th. Nevertheless, donations to those campaigns rocketed into lofty millions and dwarf the money given to potato salad.

Brown has reveled in the attention, posting YouTube videos satirizing his cause with an indelible bright-eyed gaze and an upbeat smile on his cleanshaven face.

He took the ALS ice bucket challenge by pouring a bucket of potatoes over his head before someone else doused him with ice water.

Consistently, Brown thanked the Internet for its charity, personifying and addressing it personally by introducing videos with the salutation, "Hello, Internet."

Two and a half months after uploading his joke campaign, Brown was sitting on sacks of potatoes and money. He had promised to read off the list of his donors on camera while he made his first potato salad.

It took him nearly four hours to read all the names of generous people from 20-some countries -- 6,911 people donated in all.

Feeding those in need

Then it came time to do something with all those spuds and all that dough.

"I want to do the most good that I can do with this," he had told "GMA." But Kickstarter prevents campaigners from turning their cash directly over to charities.

The potato sack race is about to start. @BigIdahoPotato is getting some practice runs in. Head to their tent to race! pic.twitter.com/qLBF0VaTvk

To get around that, Brown splurged for a concert bash called PotatoStock 2014 with concession stands and sponsorships, he said on his website, thepotatostock.com.

Proceeds from the event went to nonprofits to fight hunger in Central Ohio.

Brown invited the entire Internet to the party, and a few people did drive to Columbus from other states, according to Brown's Twitter posts.

But for all the global attention, a big chunk of the funding came from close to home. About 90% came from the United States, and donors from Ohio gave the most money, followed by California.

Nearly 63% of the Ohio donations were contributed from in and around Columbus, the very area Brown intends to feed.

Zack and @BigIdahoPotato present the Big Potato. $18000 to the Columbus Foundation! pic.twitter.com/VMLrffWO8u