Michelle Wie: The dark art of a golf star 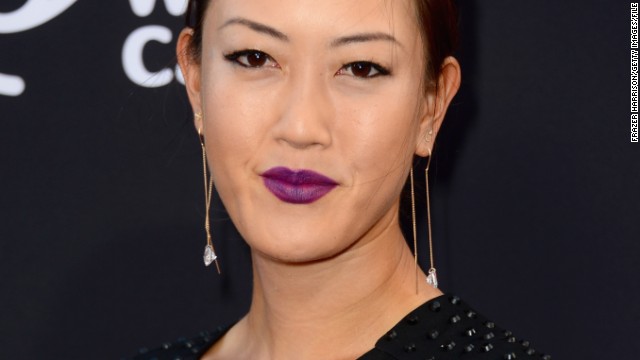 Michelle Wie is one of the most recognizable female golfers on the planet. The American has enjoyed a successful 2014, winning the first major of her career at June's U.S. Women's Open. But away from the golf course, Wie has a passion which allows her to express her darker side... 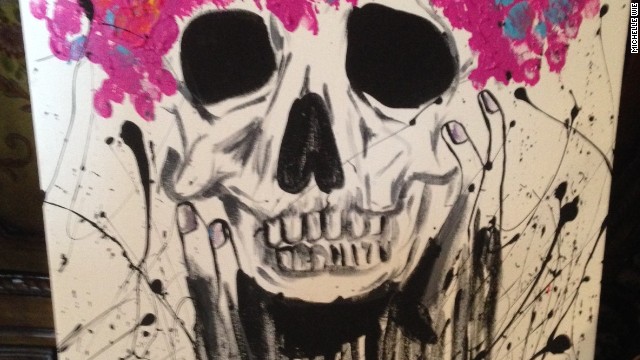 When she's not swinging a club, Wie likes to pick up a paintbrush. Her hobby started when a friend gave her a sketchbook and suggested she start drawing. The results, Wie admits, have been surprisingly morbid. 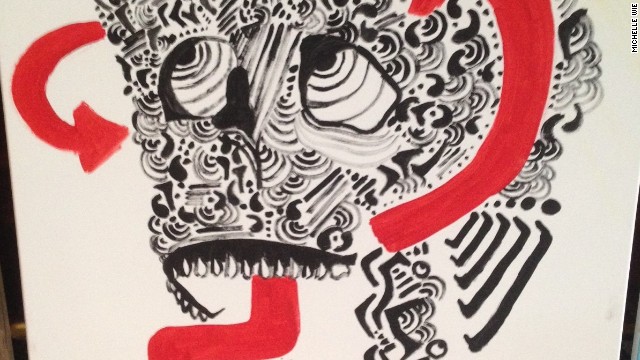 "My mom was like, 'You were obsessed with skulls ever since you were a baby,'" explains Wie. In recent years, Wie's confidence in her artwork has grown and her Twitter and Instagram accounts regularly display her pieces. 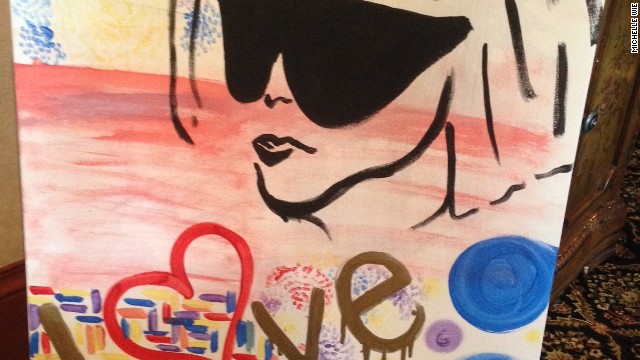 Although she now embraces her artistic talents, Wie hasn't always been so creatively minded. "I'm a big believer in just trying things out," she says. "If you fail, at least you tried." 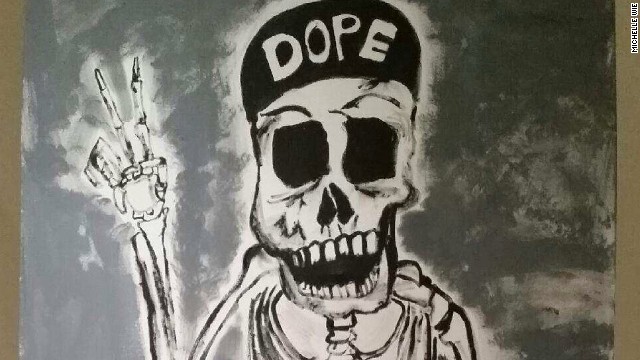 Art offers Wie an avenue to express emotions you wouldn't ordinarily associate with a sporting poster girl. "I guess I'm half a very happy person, half a very morbid person," says the 24-year-old. "There's a lot of emotions and feelings you can't really get out any other way and I'm not a very good poet or lyricist." 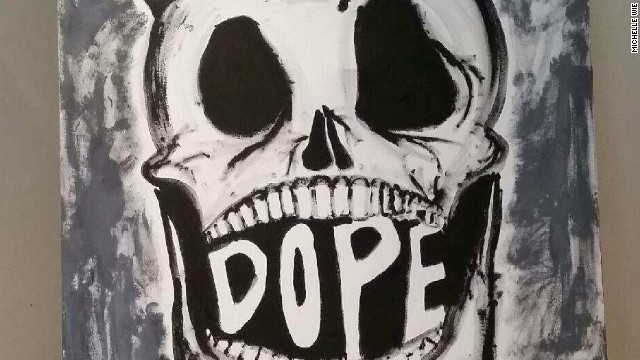 "When I was in middle school I definitely went through a gothic, emo phase," she says. "I don't know how to paint happy. I think it releases a lot of the darker feelings in me. My happier ones are always on the exterior. There are definitely two sides of me, for sure." 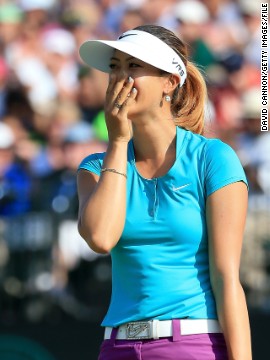 On the course, Wie has enjoyed a standout 2014 season, doubling her career tally to four pro titles. After holing her final putt at the U.S. Women's Open, Wie was overcome with a mix of joy and relief as she ended her long wait for a major championship. 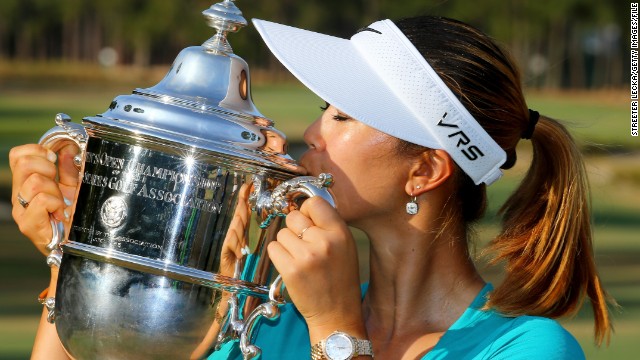 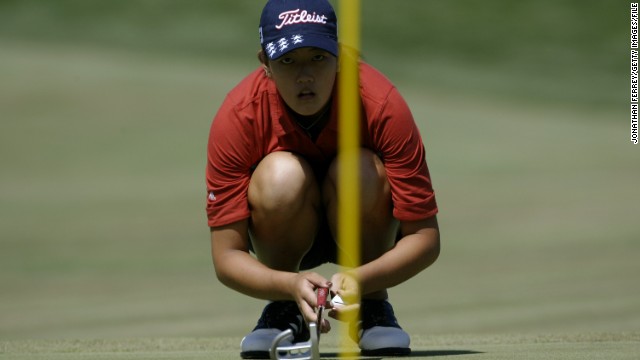 Wie has been shouldering great expectations since a young age. She qualified for an LPGA tournament at the age of 12, making her the youngest to do so. 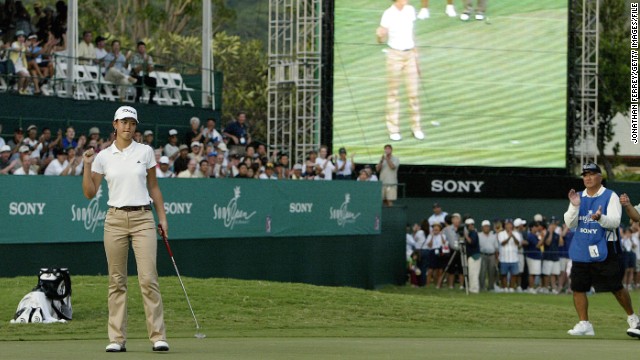 Wie joined an elite group of female golfers when, in 2004, she played on the men's PGA Tour at the Sony Open. Aged just 13, Wie carded an impressive 68 in the second round but eventually missed the cut. 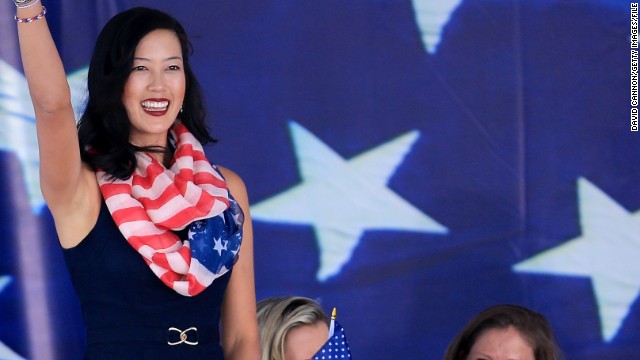 (CNN) -- Her artwork is dark, bold and often sombre, with black figures and sinister skulls splattered across the canvasses.

"My mom was like, 'You were obsessed with skulls ever since you were a baby,'" explains Michelle Wie, one of the world's leading female golfers.

It's an infatuation that comes to the fore when she picks up a paintbrush; an infatuation she finds hard to explain and one seemingly at odds with the smiling poster girl who has been playing golf for as long as she can remember.

"I guess I'm half a very happy person, half a very morbid person," the 24-year-old told CNN.

Final product! Used the lyrics from the song: Power in the Words by @TheGreen808 😛 pic.twitter.com/oWbAYygTfY

"There's a lot of emotions and feelings you can't really get out any other way and I'm not a very good poet or lyricist.

"I definitely feel very in the moment when I paint."

In recent months, Wie has certainly been in the moment on the golf course.

The Hawaii-born former child prodigy -- whose parents immigrated from South Korean -- won the first major of her career at June's U.S. Open, sweet relief for a player who has carried the weight of expectation on her shoulders for over a decade.

"I think that people have very high expectations of me," says Wie from her Florida home in a telephone interview. "It's really tough being in the spotlight, everything you do is examined.

Life in the public eye

Wie knows all about public scrutiny.

In 2000, age 12, she became the youngest player to qualify for an event on the LPGA Tour -- the premier women's golf circuit.

At just 13 she became the youngest woman to make the cut at an LPGA tournament, the prestigious Kraft Nabisco Championship -- one of the women's majors. At the 2004 Sony Open she became only the fourth -- and youngest -- female to play on the men's PGA Tour.

Wie turned pro in 2005, just shy of her 16th birthday, and signed lucrative sponsorship deals with Nike and Sony.

Age rules prevented her from joining the LPGA Tour until she turned 18, but she still competed in a number of events between 2005 and 2008.

However her teenage body was struggling under the strain; she injured both wrists in 2007 while she also suffered a drop in form resulting in missed cuts and disqualifications.

"You can't have all the fun of being a kid and try to fulfill your dream. I sacrificed a few things here and there, but I think I did a really good job of living a balanced life."

In September 2007 she enrolled at Stanford to study communications, although Wie's status as a professional prevented her from following in the footsteps of Tiger Woods and joining Stanford's illustrious golf team.

"Going to Stanford really helped me to be semi normal," she said. "I love studying, I love everything about it. I grew up on a college campus. Going to Stanford was one of my biggest dreams growing up. I'm so happy that I got to achieve it."

With a fondness for making study guides and PowerPoint presentations, Wie's ability to speed read helped her keep up with her schoolwork while simultaneously attempting to launch her professional golf career.

In the future, when she puts down her golf clubs for good, Wie plans to conquer the corporate world by returning to school to study business.

"There are some business endeavors that I'd like to embark on -- I don't want to enter them and be blindsided," she explains.

Wie comes across as someone in constant need of stimulation, whether it's a physical workout on the greens and fairways or expanding her mind through reading and study.

She jokes that her friends say she has "ADD" because she rarely sits still.

This hyperactivity meant she tried a number of sports as youngster, searching for "something to be good at."

Eventually she settled on golf.

As a self-confessed perfectionist, the ups and downs of her golf career have taught the usually meticulous Wie to relax a little.

"I've learned to roll with the punches," she admits. "I'm a big believer in just trying things out. If you fail, at least you tried."

Art is a relatively recent addition to Wie's repertoire.

During her school years, her friends were artistic while she was "the sporty one."

Five years ago, her best friend gave her a sketchbook and suggested she gave it a try. From there, Wie's interest has snowballed and now her Instagram and Twitter profiles proudly display her eye-catching work. 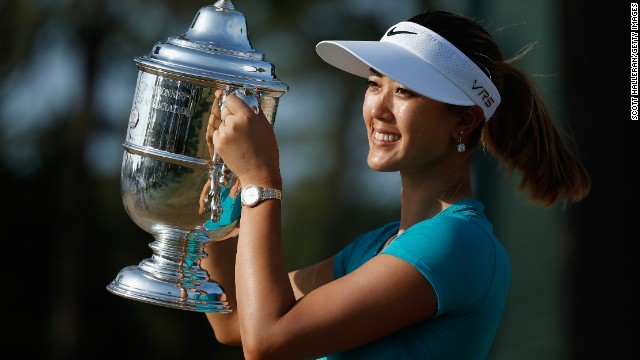 Michelle Wie of the United States poses after her two-stroke victory at the 69th U.S. Women's Open at Pinehurst Resort & Country Club. 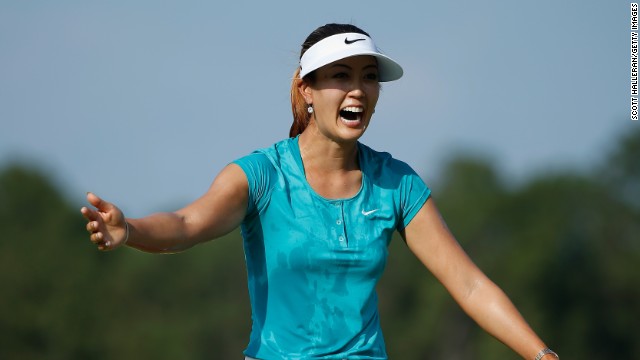 The 24-year-old was appearing at her 11th U.S. Open event and the victory represents her first ever major title. 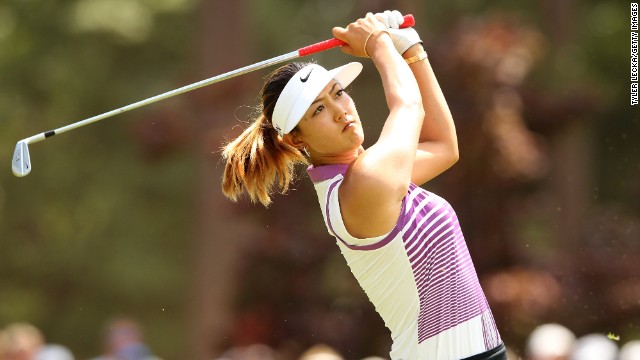 Wie was tied for first place going into the final day but stretched ahead of overnight co-leader Amy Yang early Sunday before holding off a late challenge from World no 1. Stacey Lewis. 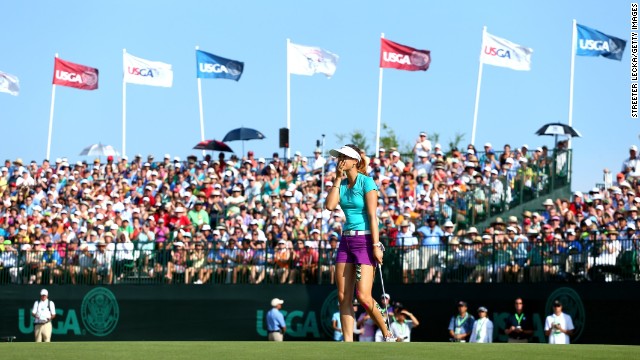 The Hawaiian had twice led her national open going into the final round, in 2005 and 2006, but finished tied for 23rd and tied third respectively on these occasions. 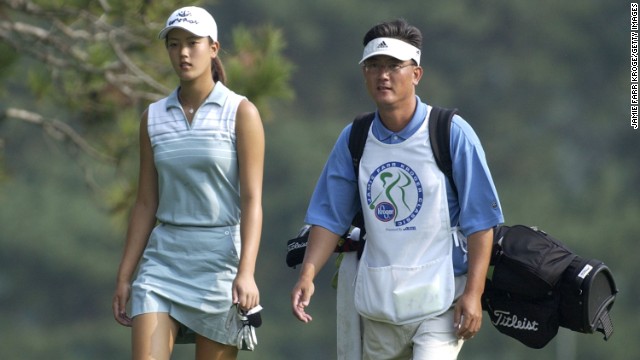 Wie first competed in an LPGA event when she was 12, then turned pro when she was 15. Here she appears with her father, B. J. Wie, at the LPGA Jamie Farr Kroger Classic in 2003 aged just 13. 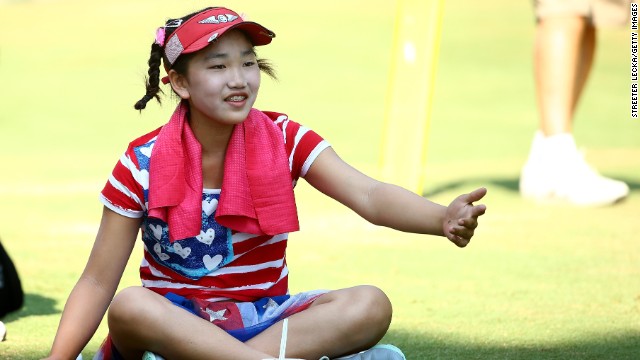 "When I was in middle school I definitely went through a gothic, emo phase," she says. "I don't know how to paint happy. I think it releases a lot of the darker feelings in me. My happier ones are always on the exterior.

"There are definitely two sides of me, for sure."

Light to the shade of her dark art is being provided by the most successful season of her pro career, which has featured two of her four career titles.

Her U.S. Open triumph came after a second-place finish at the Kraft Nabisco Championship and a win at April's Lotte Championship.

Another wrist injury has put her back on the treatment table, meaning she missed the season's fifth and final major this month in France, but once she's recovered she has her sights set on making more history.

For the first time in over a century, women's golf will be contested at the Rio 2016 Olympic Games and Wie is eying the top of the podium.

"It's definitely a huge goal of mine," she says. "Being able to represent your country and being able to win a gold medal would be one of my highest achievements, for sure."

For the ultimate perfectionist, it seems only gold will do.

Read: Five things we learned from the 2014 Ryder Cup