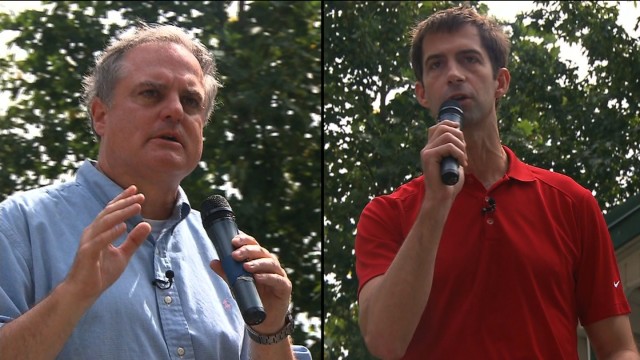 The Arkansas Democrat released a pair of videos on his YouTube page Wednesday attacking his Republican rival Rep. Tom Cotton for voting against equal pay legislation and against reauthorizing the Violence Against Women Act. The crucial Senate race is locked in a statistical dead heat, and Pryor is playing up his advantage among women.

"We've got to do something to break this cycle of domestic violence and Tom Cotton is not doing anything to help," Paulette Hill, the director of a 24-hour emergency domestic violence shelter, says in one video called "The End".

"What's Cotton got against women?" Courtney, from Little Rock, Arkansas, says in another. "Courtney" is a regular in Pryor's ads, appearing in at least four videos this year and focusing specifically issues relevant to female voters.

The videos also come one day after Pryor, the only remaining Arkansas Democrat in Congress, launched a "Women for Pryor" tour to rally the demographic group that favors him over his Republican rival 48 to 39%, according to a USA Today/Suffolk University poll released last week.

That same poll showed the pair locked in a statistical dead heat, with Pryor holding a two-point advantage. A CNN poll released in early September showed Cotton leading by the same margin.

Democrats optimistic about "The Marks"

"While Senator Pryor is busy perpetrating a fictitious 'War on Women,' it is the Obama-Pryor economic policies that have harmed so many Arkansas women by increasing the cost of everything from health insurance to gasoline to groceries," Ray said in an email.

And the campaign's response echoed the theme of the Cotton's latest minute-long ad posted on his campaign website the same day Pryor launched his "Women for Pryor" tour.

The minute-long ad features a woman, Gina, who says Pryor's vote for Obamacare has hurt her small business. The ad also opens with Cotton walking alongside another woman.

But Pryor's ad focuses on the context of Cotton's vote regarding the re-authorization of VAWA, and notes that one in four women are victims of domestic abuse -- a statistic backed by the National Coalition Against Domestic Violence.

This won't be the first time Cotton has had to defend his vote on the domestic violence legislation, which he has said was too broad.

The Pryor-approved ad also states that Cotton was the only Congressman from Arkansas to "vote this way" on reauthorizing the Violence Against Women Act.

Fellow Arkansas Reps. Steve Womack, Rick Crawford and Tim Griffin were also part of the 138 Republicans who voted against the final act last year. Those Congressmen had voted in favor of a Republican alternative though, but Cotton said no to both.

The state's other Senator, John Boozman, also voted against the bill that passed the Senate, but voted for the Republican alternative.

But the Pryor ad is trying to paint a stark contrast with Hill closing the ad by saying:

"There's a big difference between Mark Pryor and Tom Cotton, one wants to protect women and children, the other doesn't."

You know that Republican doctor who got one of his patients pregnant and then demanded that she get an abortion? Yeah, he won.
Many historic firsts among midterms
updated 3:20 PM EST, Wed November 5, 2014

A Republican tide ripped the Senate away from Democrats, giving the GOP full control of Congress and the power to pin down President Obama.
GOP keeps grip on House
updated 9:47 PM EST, Tue November 4, 2014

CNN asked commentators for views on the results of the midterm elections, in which the GOP took back the Senate and retained control of the House.
Tim Scott makes history in S.C.
updated 8:17 PM EST, Wed November 5, 2014

Voters in Oregon and D.C. have voted to approve sweeping pro-marijuana legalization while voters in Florida gave the thumbs down.
Good night for GOP governors
updated 7:59 AM EST, Wed November 5, 2014

A majority of Americans are dissatisfied with President Obama's administration and GOP leaders, according to exit polls released and analyzed by CNN.
Photos: The places America votes
updated 9:47 PM EST, Tue November 4, 2014

Take a look around the country in our gallery as America votes.
2014 Midterms: The Big Donors

Who's giving to outside groups? It's not just candidates and parties spending the cash.