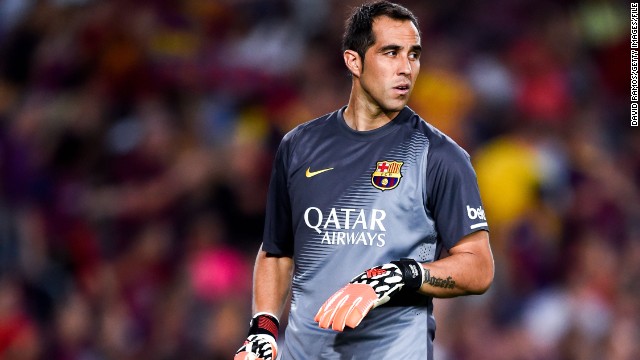 Claudio Bravo has keep a clean sheet for seven straight games in the La Liga this season.
STORY HIGHLIGHTS

(CNN) -- Barcelona are known for scoring truckloads of goals, but the Catalan side were celebrating their miserliness on Saturday as goalkeeper Claudio Bravo set a new La Liga record for time spent on the pitch without conceding.

The Chilean international, who signed from Real Sociedad in the summer, has now played 630 minutes from the start of the season without letting in a goal.

The old mark of 560 minutes set by former Barca gloveman Pedro Artola at the beginning of the 1977-78 season was passed in the 21st minute of the match against Rayo Vallecano.

"Everybody was talking about the record before the game," Bravo told reporters after the match. "But I wasn't really thinking about the minutes, I was thinking more about the game and trying to be calm and concentrate. I just wanted to keep a clean sheet."

It was Luis Enrique's side's seventh clean sheet in a row as Lionel Messi and Neymar scored at the other end to seal a 2-0 win against nine-man Rayo at the Estadio de Vallecas.

Victory moves Barcelona onto 19 points, two points clear of Valencia at the top of the table.

Los Che also continued their unbeaten start to the season with a 3-1 win over champions Atletico Madrid at the Mestalla Stadium.

Diego Simeone's side were also unbeaten in their opening six games but found themselves 3-0 down inside the opening quarter of an hour.

Guilherme Siqueira had a chance to narrow the deficit further but failed to convert his spot kick before a goalless second half ensued.

Real Madrid will move ahead of their city rivals if they beat Athletic Bilbao at the Bernabeu on Sunday.

Two goals in the final 10 minutes from Yaya Toure and Sergio Aguero earned Manuel Pellegrini's side all three points, lifting the Sky Blues to second in the table behind Chelsea who entertain Arsenal at Stamford Bridge on Sunday.

Liverpool beat West Bromwich Albion 2-1 at Anfield to seal a first league win in four matches and lift Brendan Rodgers' side to sixth in the table.

In the Bundesliga, Bayern Munich recorded a third straight league win hitting four past Hannover at the Allianz Arena.

Arjen Robben and Robert Lewandowski both scored twice to keep Bayern on top of the table with 17 points.

Hoffenheim kept touch with the leaders thanks to a 2-1 win over Schalke while Bayer Leverkusen scored a late equalizer to grab a point in a 2-2 draw with Paderborn.

Borussia Dortmund's poor early season form continued with a 1-0 home defeat at the hands of Hamburg.

Jurgen Klopp's side have picked up one point in the last four games, leaving them languishing in 13th place.

Borussia Monchengladbach can move to within two points of Bayern if they beat Mainz on Sunday.