Angelina Jolie and 'Pope Boat' to the rescue: Mission improbable? 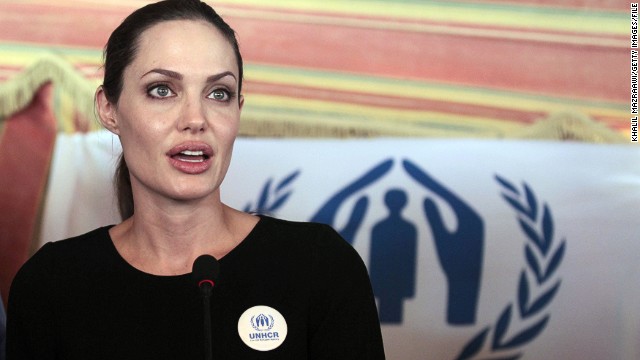 What do Hollywood actress Angelina Jolie and a 'Pope Boat' have in common? 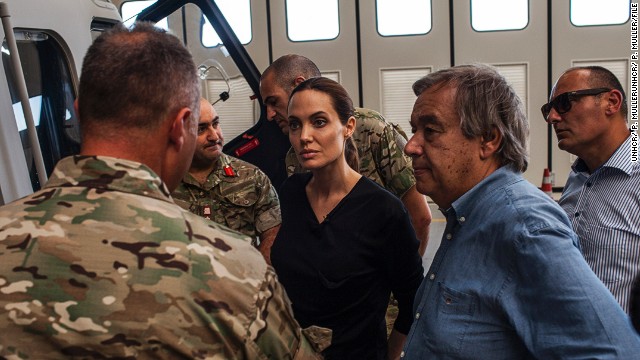 Both are hoping to save thousands of refugees from dying while attempting to cross the Mediterranean. Jolie, a Special Envoy for the UN High Commissioner for Refugees, was at a Malta naval base recently, drawing attention to the 130,000 migrants who have arrived in Europe by sea so far this year -- 2,500 dying while attempting cross the Mediterranean. 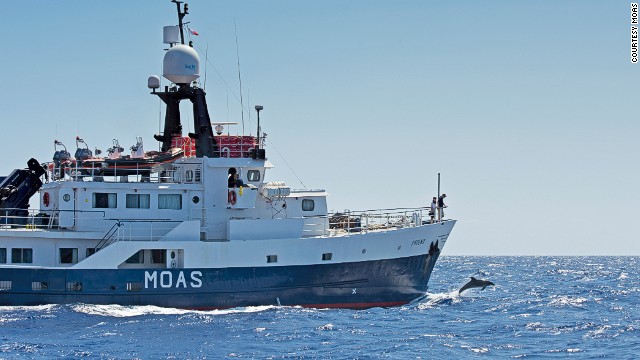 Jolie is not alone in her mission. A wealthy couple from Malta has now also launched a 40 meter rescue boat, called 'Phoenix,' to help refugees at sea. 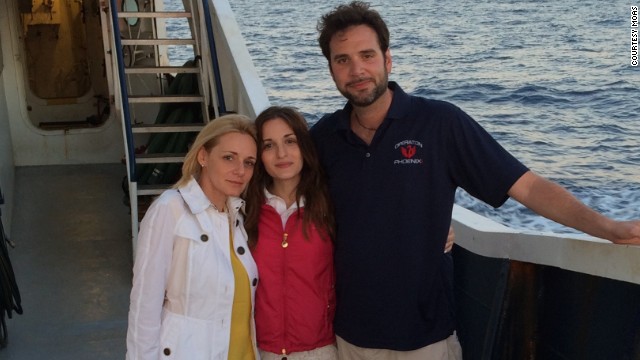 The converted fishing trawler is owned by the Catrambone family (Regina and Chris, with daughter Maria Luisa), who were inspired by a message from Pope Francis. They are now spending $445,000 each month in operating costs. 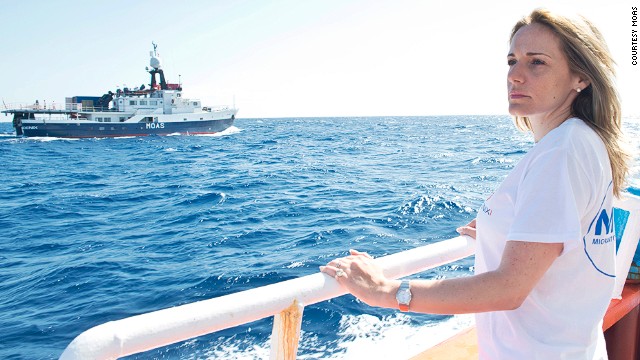 "The words of the Pope, appealing to people to help with their skills, their ability, their free time -- we had to do something," said Regina, originally from Italy and now living in Malta with her American husband and daughter. 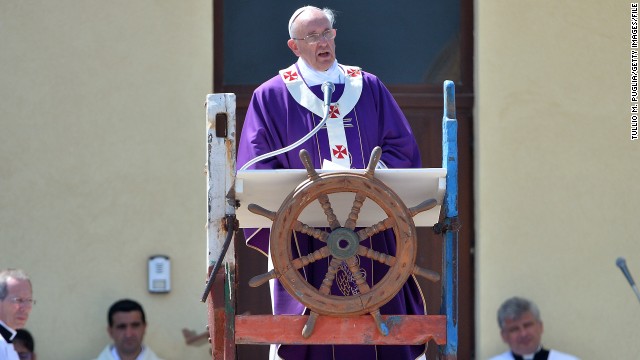 It follows the Pope's visit to the small island of Lampedusa -- where 366 migrants died in shipwreck last year -- in which he criticized the "global indifference" to the refugee crisis. As the closest Italian island to Africa, Lampedusa is a frequent destination for refugees seeking to enter European Union countries and shipwrecks off its shores are common. Many of the migrants are from African nations, while others have fled war-torn Syria, officials say. Others are economic refugees. 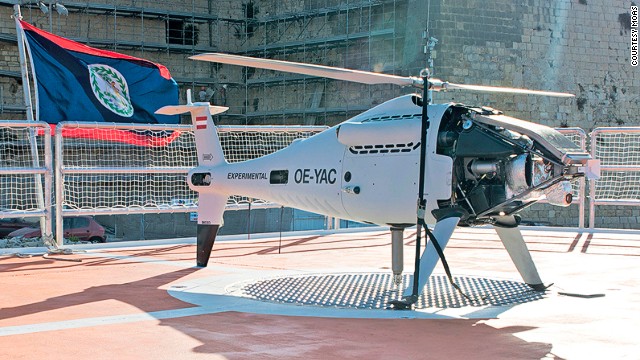 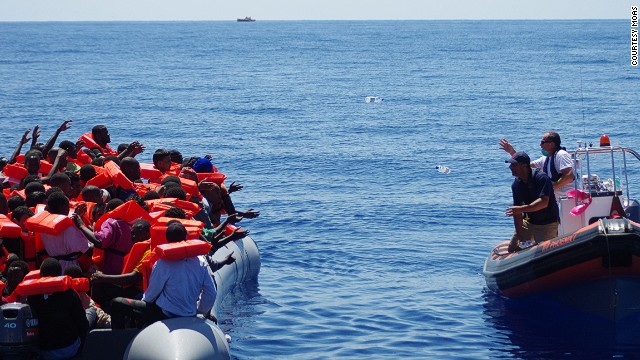 A lifeboat from rescue ship "Phoenix" approaches refugees, offering drinking water. We never approach a boat with our boat because it's rather big, so we approach cautiously with a dingy. The first thing we do is start giving out life jackets," said MOAS director Martin Xuereb. 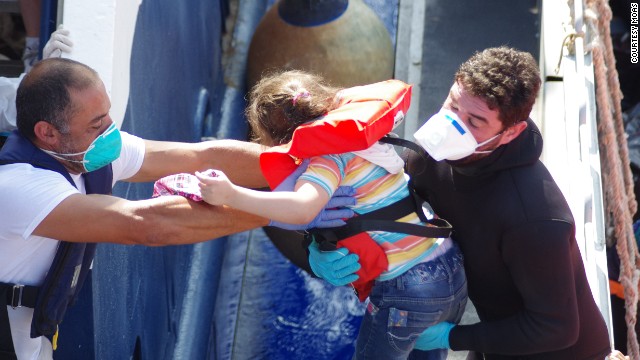 The number of migrants arriving in Europe by sea is more than double last year's 60,000, according to the UN. In Europe, the refugee issue has long been a political quagmire, as domestic and unemployment issues have taken center stage, as waves of refugees keep coming - making the perilous voyage. 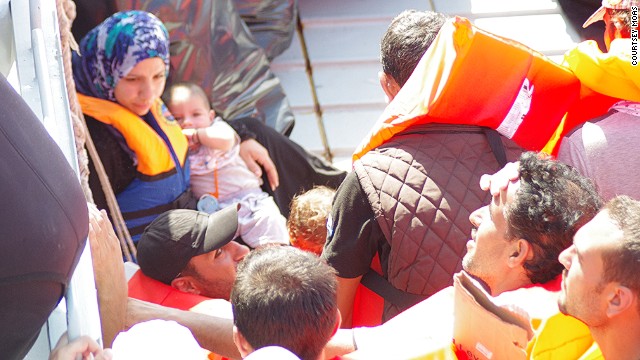 Under EU rules, people claiming asylum must remain in the first safe country they land. Once out of mandatory detention in Malta, they are moved to an open center in a converted aircraft hanger, where they must wait to be considered for asylum in their country of choice.
HIDE CAPTION
Angelina Jolie
Malta mission
Phoenix rises
Caring Catrambones
'Pope boat' to the rescue?
Vatican on vessels
High-tech help
Water works
Womena and children first
What next?
<<
<

(CNN) -- When clinging to life at sea, even a non-believer might be moved to pray for salvation.

Imagine their surprise then, when on the horizon they see not only a rescue vessel inspired by Pope Francis, but Hollywood star Angelina Jolie.

The glamorous actress was the unlikely guest at a naval base in Malta recently, meeting Syrian refugees who had survived deadly boat journeys to Europe.

Among them were a couple from Damascus whose three children had died during the crossing, and a doctor from Aleppo whose wife and three-year-old daughter drowned.

"We have to understand what drives people to take the fearful step of risking their children's lives on crowded, unsafe vessels," said Jolie, the Special Envoy of the United Nations High Commissioner for Refugees.

"It is the overwhelming desire to find refuge."

As conflict rages in the Middle East, over 130,000 people have arrived in Europe by sea so far this year -- 2,500 of these dying while attempting to cross the Mediterranean, according to the United Nations Refugee Agency.

Jolie is not alone in her mission to save them.

A wealthy philanthropist couple has backed her campaign, saying: "The world needs to wake up to the scale of this crisis."

Now they've put their money where their mouths are, launching a state-of-the-art rescue vessel -- inspired by the leader of the Vatican.

Introducing the "Phoenix," a 40-meter converted fishing trawler owned by Chris and Regina Catrambone; a couple describing themselves as "social entrepreneurs," who make their money by running an insurance, emergency assistance, and intelligence company.

Digging deep into their own pockets, they are spending $445,000 each month on the ship's operating costs.

The boat has so far helped over 2,000 migrants crossing the Mediterranean from North African shores -- believed to be the first privately-funded vessel ever to do so. 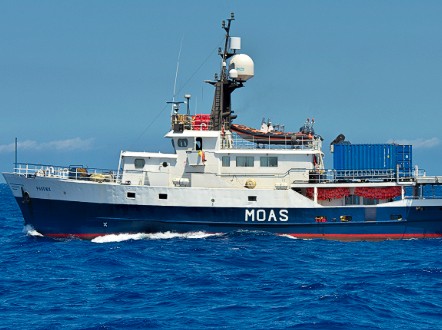 The Phoenix has two onboard drones to search out migrant vessels.
MOAS

It follows the Pope's visit to the small island of Lampedusa -- where 366 migrants died in shipwreck last year -- where he criticized the "global indifference" to the refugee crisis.

Just a few weeks ago another migrant boat sank carrying 500 people near Malta, in one of the worst wrecks in the region.

"The words of the Pope, appealing to people to help with their skills, their ability, their free time -- we had to do something," said Regina Catrambone, originally from Italy and now living in Malta with her American husband and daughter.

"When you see in the face of a seven-year-old child that they are safe on the boat -- there's no price you can put on that."

Here we were in this nice boat, when the migrants, people like us, are attempting to cross because there's a war in their country
Regina Catrambone

While other ships celebrate their maiden voyage with a bottle of champagne, this hefty 483-ton boat was launched with holy water sprinkled by a priest.

"We are normal people that are wealthy, but we are far from millionaires," said Regina, adding that the family choose to invest their money in human life, rather than making a profit.

"It's a lot of time, and a lot of energy. But our belief and our faith is the big push."

The biggest wake-up call for the couple -- both in their 30s -- came while holidaying on board a luxury yacht in the Mediterranean last summer.

"I saw a winter jacket in the water, and I said to the captain, who is also a retired coast guard of Malta: 'Look isn't it strange,'" said Regina.

"And his face became very sad, and he told me: 'The person who was wearing this jacket is not with us anymore.'"

"Here we were in this nice boat, when the migrants, people like us, are attempting to cross because there's a war in their country."

Director of operations, Martin Xuereb, is the former chief of defense of the armed forces of Malta -- the body responsible for search-and-rescue in the area. 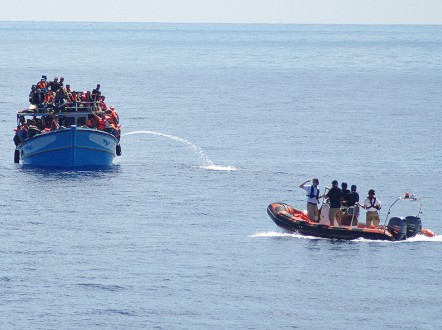 Before approaching a migrant boat, the Phoenix usually sends a dinghy to assess the situation.
MOAS

Along with a crew of 16, including two paramedics, the boat is equipped with two high-tech drones, a medical clinic, 1,000 liters of water, hundreds of life jackets, and food.

"The primary aim is to prevent the loss of life, not ferry migrants," says the organization on its website.

Once at sea, the Phoenix sends out drones equipped with camcorders to search for migrant boats.

The MOAS team then reports back to the nearest authorities and awaits instructions and help. If necessary, it will offer life jackets, medical assistance, and evacuate refugees on board.

Captain Filippo Marini, spokesman for the Italian Coastal Guard, would not comment on the merits of the Maltese-based mission, saying: ''They are a resource but it's not up to us to say if it's an appropriate initiative."

The Maltese government was unable to provide a comment on the MOAS mission, despite numerous requests.

These are people who, had the situation been different, would never have left their country
Martin Xuereb

After recently rescuing nearly 250 people -- including nearly 50 children -- from a leaking wooden boat, the Phoenix later transferred the migrants to an Italian navy ship, where they were taken to Italy and processed by authorities, they said in a statement

"They were Syrians and Palestinians," said Xuereb. "And talking to these people, one realizes they are fleeing from desperate times," he said.

"There were doctors, teachers on board. These are people who, had the situation been different, would never have left their country."

Could a Hollywood star and "Pope Boat" be the ones to save them? Perhaps...but their efforts are a drop in a very big ocean.