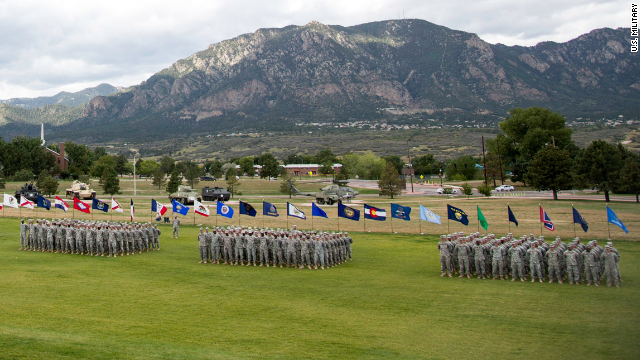 (CNN) -- The nation's oldest Army armor unit at Fort Carson in Colorado remained in lockdown for a second day Friday, after the post began investigating "the unauthorized removal of government property," the military said.

"The 66th Armor Regiment is the oldest Armor unit in the United States Army, tracing it's lineage to the beginning of the Tank Service in February 1918," its Facebook page says.

"This type of lockdown is a unit lockdown, which is at a commander's discretion," Johnson said.

Between 500 to 750 soldiers are affected "at most" at the 26,000-soldier installation near Colorado Springs, Johnson said.

"So you're talking about a very small impact," Johnson said.

This type of lockdown is not common, a spokesman said.

As part of random searches at the gate, we are conducting outbound vehicle searches in order to prevent the... http://t.co/XUhqWGkdGf

The measure means that soldiers remain on-duty working on the base instead of being allowed to go home, CNN affiliate KKTV reported.

The property purportedly missing was from that unit, and base authorities searched outgoing vehicles Thursday to make sure property was not being removed from the base, the affiliate reported.

The U.S. Army plans to launch two stationary "blimps" at 10,000-feet in the air next week to better protect the Washington D.C. area from cruise missiles and other possible air attacks.
Navy: New laser weapon ready for action
updated 9:12 AM EST, Thu December 11, 2014

The U.S. Navy says its new laser weapon works and it will use it if it has to.
A first for Navy's newest fighter
updated 8:46 PM EST, Tue November 4, 2014

A combination of old and new hooked up off the coast of San Diego Monday to give the U.S. Navy a glimpse into its future.
U.S. Navy could 'swarm' foes with robot boats
updated 8:20 PM EDT, Sun October 12, 2014

The U.S. Navy's oldest nuclear aircraft carrier has given a piece of itself to one the younger carriers in the fleet.
Saving the Flying Fortress
updated 4:39 AM EDT, Thu October 2, 2014

When a flight of military helicopters descended into a field in the small village of Gruta, Poland, on Tuesday, residents had reason to be alarmed.
Former Navy carrier on final voyage
updated 1:35 PM EDT, Fri August 22, 2014

A storied former U.S. Navy aircraft carrier is on its final voyage Friday, a slow voyage from Rhode Island to a scrapyard in Texas.
U.S. military's fighter fleet
updated 7:10 AM EST, Tue November 4, 2014