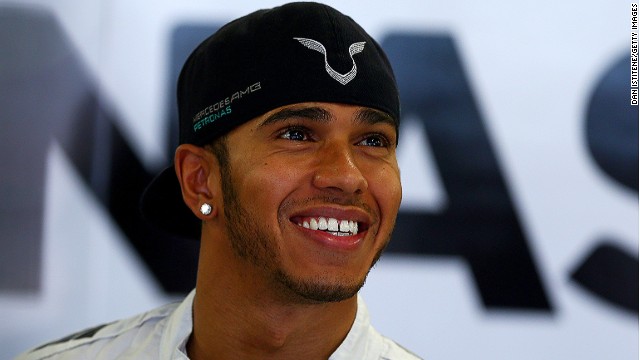 Lewis Hamilton smiles in the garage during final practice ahead of the Russian Formula One Grand Prix.
STORY HIGHLIGHTS

(CNN) -- Lewis Hamilton will start the first ever Russian Grand Prix in pole position after coming out on top in Saturday's tense qualifying session.

The Mercedes driver has been on dazzling form in recent weeks, winning consecutive races in Italy, Singapore and Japan to climb atop the overall driver's standings, and his hot streak continued in the Black Sea resort town of Sochi.

Hamilton clocked a fastest lap of one minute, 38.338 seconds but was made to sweat by the Williams of Valtteri Bottas who looked set to trump that time only to skid off at the very end of the third qualifying run.

McLaren's Jenson Button will begin the race from fourth position ahead of the Toro Rosso of home favourite Daniil Kvyat who edged out Kevin Magnusson of McLaren and Daniel Ricciardo of Red Bull.

"Pole is a great place to start," Hamilton told the waiting press after coming off the track.

"It wasn't the easiest of sessions. Rosberg and Bottas were looking quite strong and hooking up a good lap wasn't the same as practice. It will be tough tomorrow in the race. It is a long way down to turn one. We'll see how that works out."

"I wasn't comfortable in the car today. It was very difficult," Vettel said. "The car felt nervous, so I couldn't take the speed into the corners, I lost the rear many times around the lap and therefore wasn't quick enough."

The day's qualifying took place under calm, sunny conditions that were in stark contrast to the heavy rain a week earlier in Japan that led to Marussia driver Jules Bianchi suffering a severe head injury.

The 25-year-old Frenchman remains in hospital in Yokkaichi and a number of drivers spoke earlier this week about the difficulty of competing again so soon after such a traumatic incident.

Hamilton said he was praying for the Frenchman while all 21 drivers have put the words "Tous avec Jules #17" on their helmets this weekend to show their support.

Bianchi's Marussia teammate, Max Chilton, took to the track Saturday but finished the day in 21st position and will start last on the grid Sunday.

He later described the emotions he and his team felt and the difficulties of trying to focus on racing under the circumstances.

"(It's been) a tough weekend and one that hasn't got any easier as we've progressed towards the race," Chilton said.

"I'm grateful for having the whole Team around me as I think that it is helping all of us to focus.

"Performance-wise, we didn't get the qualifying position we wanted today, but there are some reasons for that.

"We'll keep pushing hard this evening, and do our best to get ahead of the Caterhams tomorrow, but the fact is, it's not the same without my teammate."