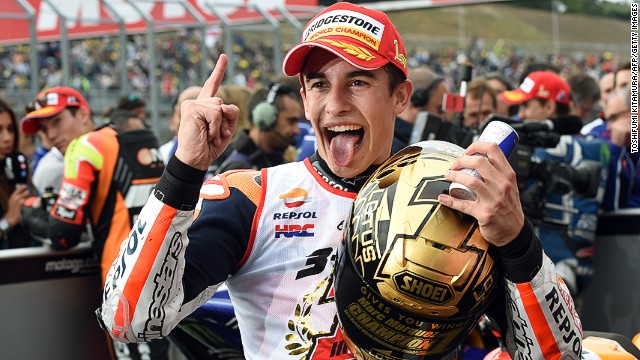 (CNN) -- It took a little longer than most people expected but MotoGP whiz kid Marc Marquez wrapped up a second world title in Japan.

The 21-year-old finished runner-up behind compatriot Jorge Lorenzo -- and crucially ahead of the legendary Italian Valentino Rossi and Dani Pedrosa -- to take an unassailable 82-point lead in the championship with three rounds to go.

The landmark means Marquez beat Mike Hailwood's record, set in 1963, to become the youngest ever rider to win consecutive titles.

But perhaps more importantly for his Repsol Honda team, he did it at Motegi.

This track is sacred ground for Honda. The Japanese giants designed and built the track; it is where they test their cars as well as their bikes, and it also houses Honda's museum.

As such, the pressure to perform here is intense. Perhaps because of this, no Honda rider had ever managed to clinch the championship here -- until now.

In the end it was an efficient performance from the reigning champion, but there was no sense of inevitability.

Rossi blasted into the lead, while a muscular pass from Lorenzo saw Marquez fall back to seventh place on the race's first corner.

The champion fought his way up to fourth on the second lap, but Lorenzo looked to be a man on a mission, first breaking the lap record and then ducking past his Movistar Yamaha teammate Rossi on lap five to take a lead he would maintain to the line.

For Marquez the key was to finish ahead of Pedrosa and Rossi, and gradually he settled into the task.

Easing past his fellow Spaniard, he then closed the gap on the Italian. After 14 laps he finally caught him, but his first attempted pass saw the wily Rossi immediately bite back to retake second.

A lap later though and Marquez took advantage of the Honda's superior cornering to slip inside the Yamaha's line.

It was all he needed to do, and the remaining eight laps saw him cement his place and cross the line in comfort.

Marquez had talked before about the burden of expectation as his season unfolded, and he appeared as relieved as he was delighted to finally seal the title.

"Two years in MotoGP, two titles. It's incredible," Marquez told reporters. "I couldn't have imagined it.

"Maybe to people it looked easy because I am always smiling and always happy, but also I feel pressure."

Lorenzo's victory, his second in two races, equals five-time world champion Mick Doohan's record of 54 grand prix victories, moving him up to him up to joint fifth place in the all-time winners list.

But his return to form has come too late for him to threaten Marquez for the championship.

"We are happy for Marc that he won the title," he said. "This year he was the best in general, so we want to say congratulations."

Rossi, enjoying something of an Indian summer to his career back at Yamaha, also congratulated the young champion: "I have to say that he deserves this championship. He worked well and was the stronger man this year."

MotoGP is a sport that thrives on spectacle, and Marquez had saved a special treat for his fans at the checkered flag.

A man in full samurai costume, flanked by two women in geisha dresses, appeared on the track side gravel through a red smoke of fireworks.

The samurai handed Marquez a sword, with which the champion cut the string of a balloon bearing the number one.

A geisha then handed him a gold helmet, which he donned to perform his lap of honor. It was a fitting celebration for a truly extraordinary rider.

Since the end of Marquez's record equaling winning run in Brno the MotoGP championship has seen different winners and tight contests, which will have relieved the Spaniard's rivals as well as the sport's administrators.

He is still one win short of equallng Mick Doohan's record of 12 wins in a season, but Doohan himself warns that the period of Marquez domination may have just begun.

"He's lifted the bar quite substantially this year," the Australian told BT Sport. "Last year he moved it, this year he's added to that. For someone to take away this dominance -- it's either Lorenzo or another guy coming through, and at the moment who's that?"

It is not an easy question to answer, but contenders are out there. And there may be one very close to home.

It was a double celebration for the Marquez family as younger brother Alex snatched victory in the Moto3 class.

The junior sibling leads that championship; the prospect of the brothers fighting for future titles in the premier class is a mouth watering one.