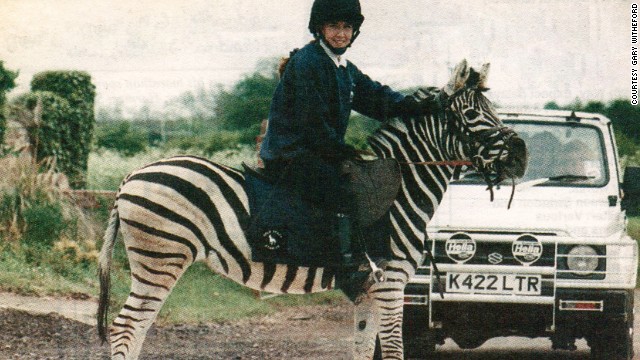 No, your eyes are not playing tricks. That is a girl riding a zebra. 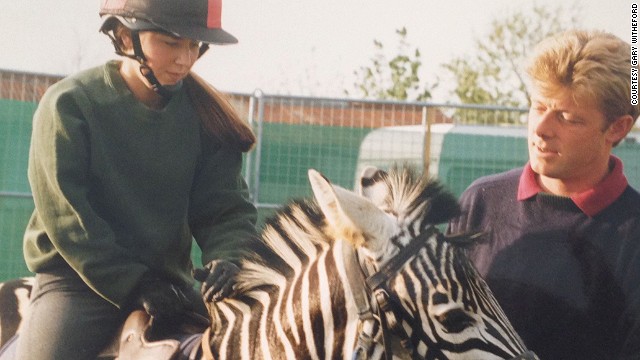 Horse trainer Gary Witheford (pictured), trained Mombssa the zebra in 1996. He has since tamed three more of the animals, earning the nickname "The Zebra Whisperer." 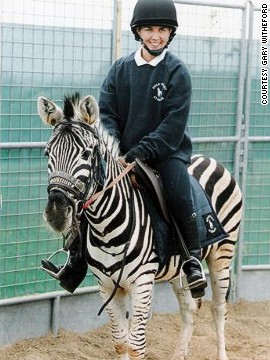 Schoolgirl and keen rider Nicky Davies was the brave jockey atop Mombasa, pictured here in the English countryside in the 1990s. 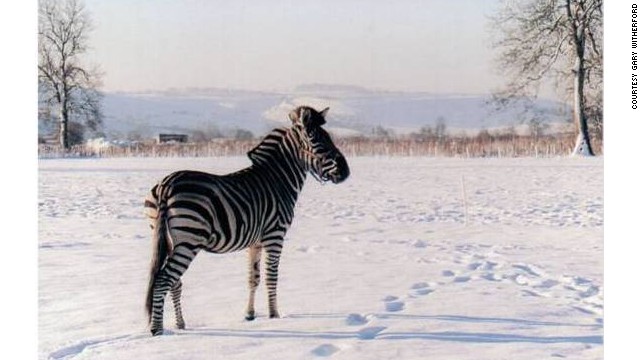 Mombasa was presented to Witheford as a challenge after he was overheard in a pub boasting how he could tame a zebra. 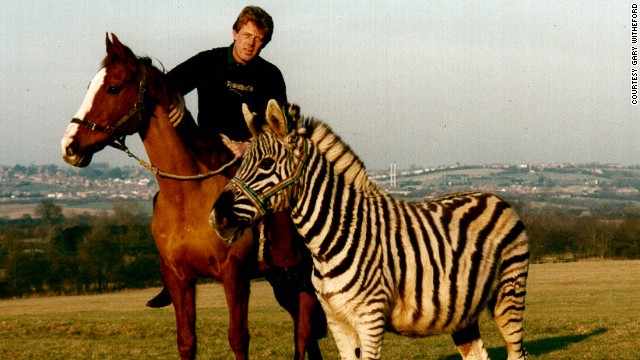 Witheford tames between 600 and 800 horses a year, as revealed in his new book "If Horses Could Talk." 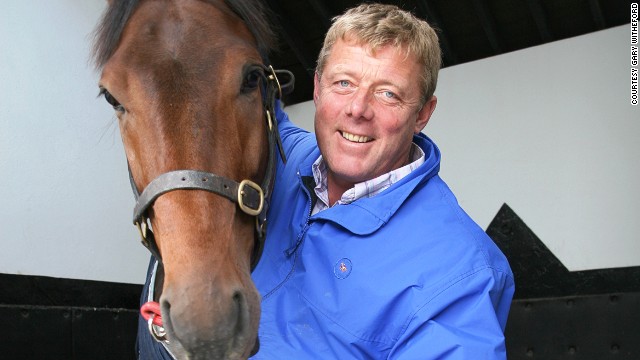 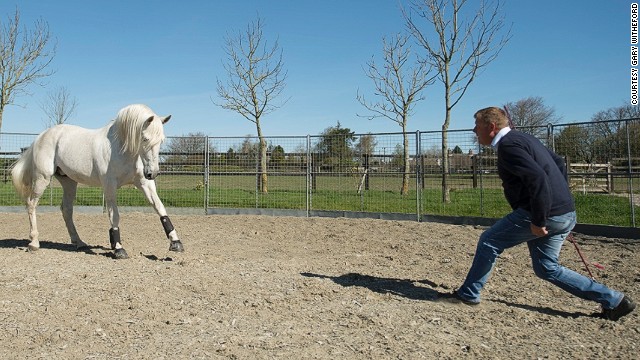 "It doesn't matter if it's the Queen's horse, or somebody up the road," says Witheford. "It's still just a horse to me. It's easy to put a bullet in their head and say they're no good. But they are all good. There's a lock for them all, we've just got to find the key for each of them." 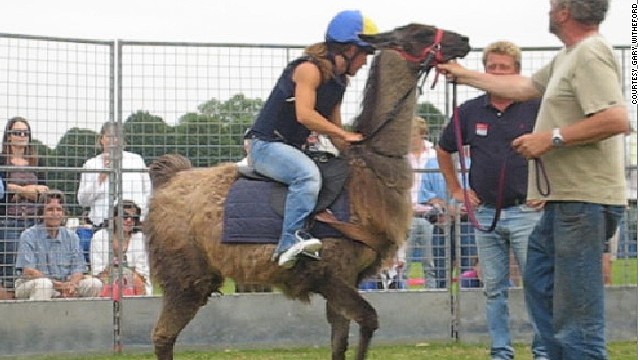 First horses, then zebras, and finally ... llamas? Witheford says he's never come across an animal he hasn't been able to train. 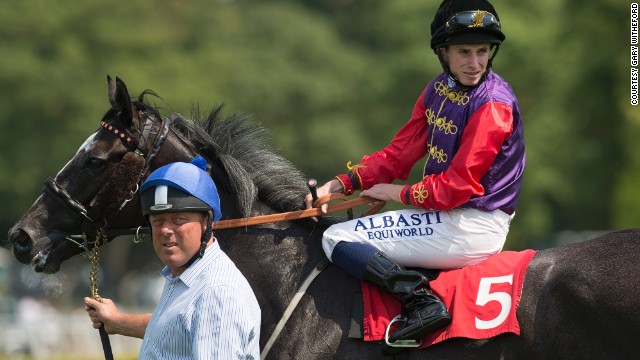 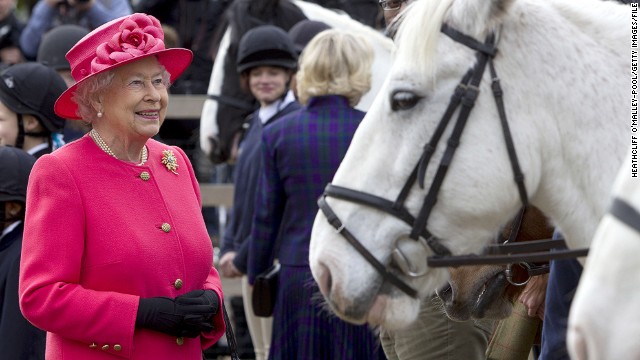 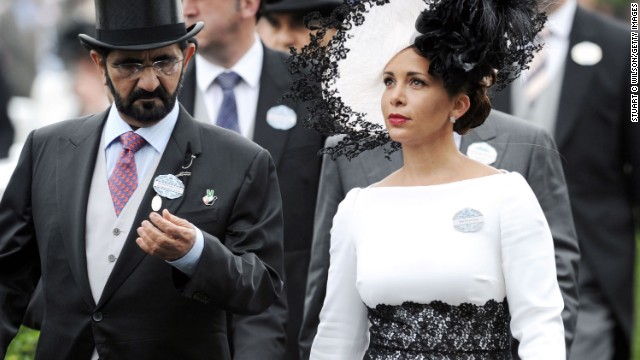 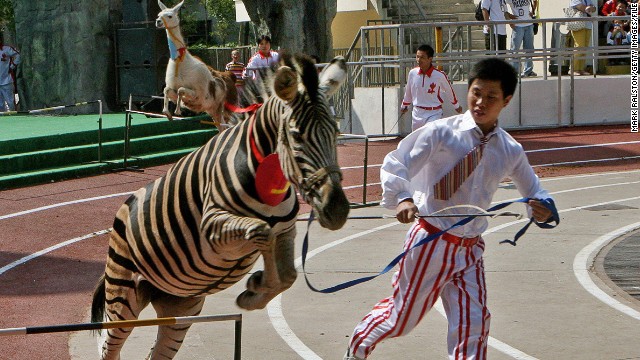 Many have tried to train the wild African animal. Here, a zebra is led over a hurdle during the 2006 Animal Olympics in Shanghai. 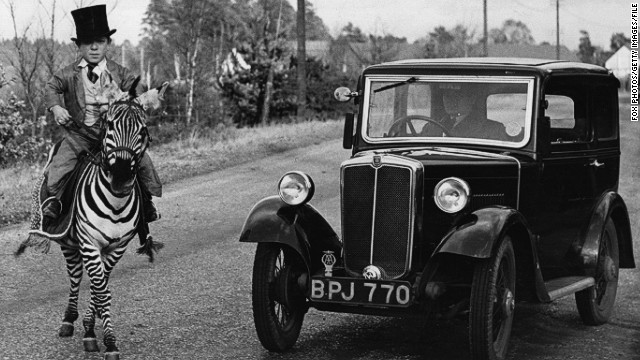 Back in 1935, a motorist pauses as Laffin Leslie, 18, guides Jimmy, labeled "The only rideable zebra in the world," across a road in Berkshire, England. 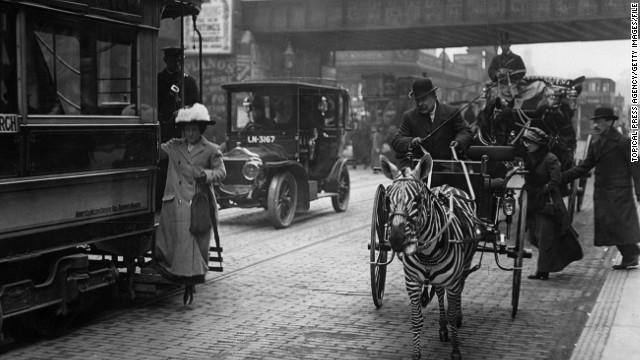 Here a zebra pulls a carriage in London, 1913. In fact, many old photographs purporting to be of zebras were of painted horses. "Always look to see if they have tails," says Witheford. "Zebras don't have tails like horses, they're more like a lion's."
HIDE CAPTION
Zebra crossing
Magic of the 'horseman'
Strike a pose
A long way from home
Healing hands
Special connection
Four-legged friend
Llama lunge
Royal reception
One is amused
No horsing around
Obstacle course
Historic curiosity
Real deal?
<<
<

(CNN) -- What started as a night drinking in the pub, turned into a morning riding a wild zebra.

If it sounds like the kind of story generated by one-too-many beers and a vivid imagination, then there's no doubting legendary horse trainer Gary Witheford's photos.

Yep, that's a girl riding a zebra, all right. 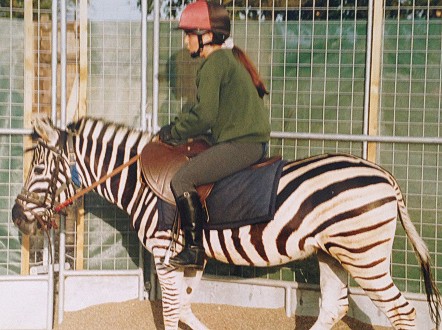 While other trainers usually take six to eight weeks to break in a horse, British equine expert Witheford says he can do the job in just 20 minutes, as revealed in his new book "If Horses Could Talk."

Not just horses -- but donkeys, llamas, and a black-and-white striped animal better associated with the African savannah than the English countryside.

"They said zebras can't be broken, they can't be ridden. But the first one was broken in 40 minutes. And the next one, which was completely wild, was broken and ridden away in 20 minutes."

In his 30 years in the business, Witheford, who prefers to be called a "horseman," says he has never encountered an animal that was not tameable.

And that includes zebras -- the horse's exotic equine cousin, which for centuries has roamed the African plains unsaddled.

Witheford made a boozy boast to that effect while drinking with friends at a local bar one night in 1996.

Little did he realize he was overheard by a woman who worked at nearby Longleat Safari Park in the south of England.

True to her word, the following morning Witheford was confronted with two zebras -- one of them so flighty it dashed straight out onto the motorway, where it narrowly escaped oncoming traffic.

These creatures were wild, even by the "horseman's" standards. One kicked him so hard with its hind legs that it split his hand open.

"Zebras are at the bottom of the pecking order," explains Witheford. "The lions and the hyenas are always on their backs.

"So they're sharp -- they have to react to sounds, smell, and sight very quickly or they'll get eaten. They're always on guard."

Nonetheless Witheford set to work on the first zebra, called Mombasa, much like he would any other horse -- though rather than bending down to attach the saddle, he kept his distance by using a type of pulley system.

He allowed Mombasa to race and rear around the pen until the three-year-old colt tired himself out to the point of compliance.

When it comes to the details of Witheford's taming technique however, the fast-talking trainer makes it sound so simple.

I just go into the pen, put a saddle on it, let it have a little buck and a rear, and then within two minutes it wants to come back to you
Gary Witheford

"I just go into the pen, put a saddle on it, let it have a little buck and a rear, and then within two minutes it wants to come back to you," says the grandfather-of-three, speaking by phone from his stables in Wiltshire, in the south of England.

"It's about reading the animal -- understanding it by the way it licks and chews, its ears and eye contact, how the body language is working.

"Once it starts to trust you, it does what you ask it to do."

Once Mombasa was settled, a small jockey was needed for the zebra, which stood just 12 hands high.

Schoolgirl and keen rider Nicky Davies was enlisted for the task, and within 30 minutes was happily trotting the animal around the pen, much to everyone's amazement.

Three more zebras followed Mombasa, eventually living on Witheford's farm as among the most unusual pets the English countryside had ever seen. 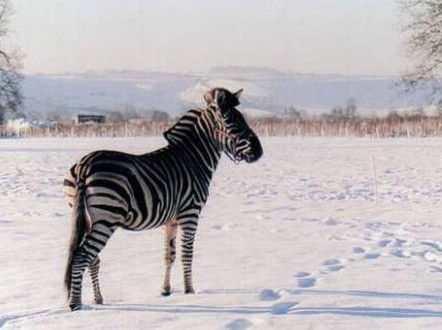 Mombassa was a striking sight in the English countryside .
Gary Witheford

"You'd call Mombasa and he'd come galloping over, braying like he does," Witheford says.

"He was like my dog, he was so friendly."

Could Witheford's magic touch come from a deeper, spiritual connection, given the issues of childhood trauma that he reveals in his book?

"I threw myself into horses, and I learned to stay away from people -- people hurt you, horses don't," says Witheford.

Today, the celebrity trainer "breaks in" anywhere between 600 and 800 horses a year -- not that he sees it that way.

"Break is a bad word," says Witheford. "You don't want to break the horse. If you went to school for the first day in your life, and you got knocked about and frightened, you wouldn't want to go back the second day.

"It's more about starting something new. 'Start' is a nicer word I think."

A new start, not just for the horses -- but for the legendary "horseman" himself.