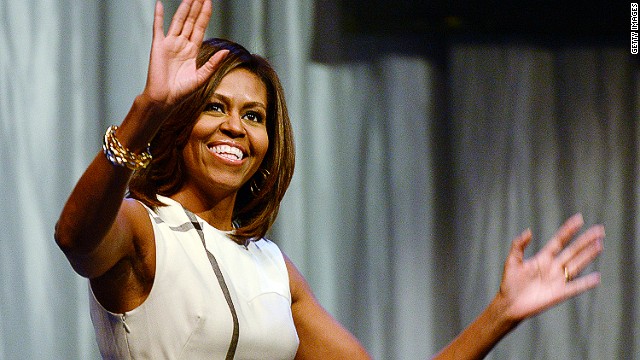 (CNN) -- Michelle Obama, never one to turn down an opportunity to champion healthy eating, has co-opted a popular tune -- and, in six seconds, created a viral sensation.

Here's how it happened.

In an #AskTheFirstLady segment, Barack Obama impersonator Imman Crosson, or @AlphaCat, asked Obama, "How many calories do you burn every time you 'turn up'?!"

A question for Michelle Obama: How many calories do you burn every time you 'turn up'?! #AskTheFirstLady #L... https://t.co/EteCEfKCUg

(That's lingo for ... well, in the safest sense, cutting loose).

Her six-second response, posted on the White House Vine account?

Yes, that's the first lady dancing with a turnip.

It's a take on DJ Snake and Lil Jon's "Turn Down for What."

The result? Cool points, and a cool point made.

Obama is known for her commitment to health, especially among children and young people. Her "Let's Move" campaign aims to "solve the epidemic of childhood obesity within a generation."

So she's not entirely uncomfortable wielding a vegetable.

This isn't her first foray into pop culture to get us to eat our veggies.

Earlier this year, she starred in a "Tonight Show" skit called "Ew!"

The first lady taught Sara, played by Jimmy Fallon, and Stacy, played by Will Ferrell, that being active and eating right isn't so "Ew!"