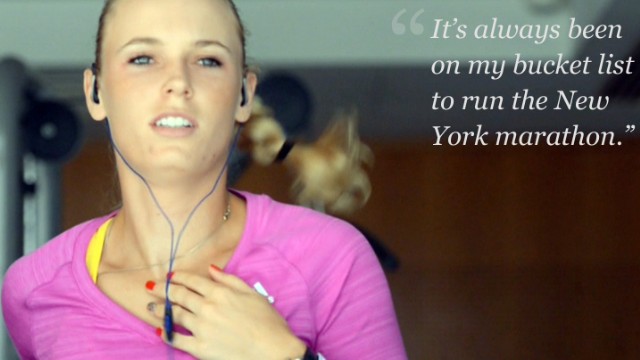 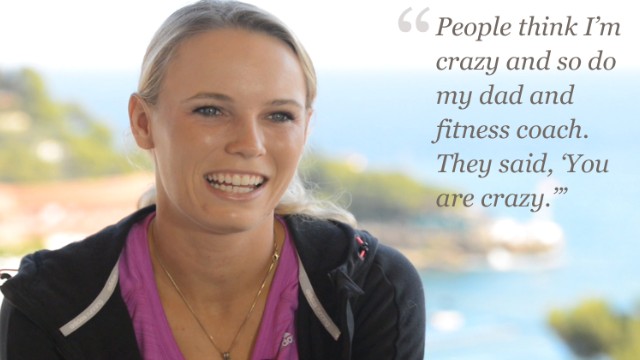 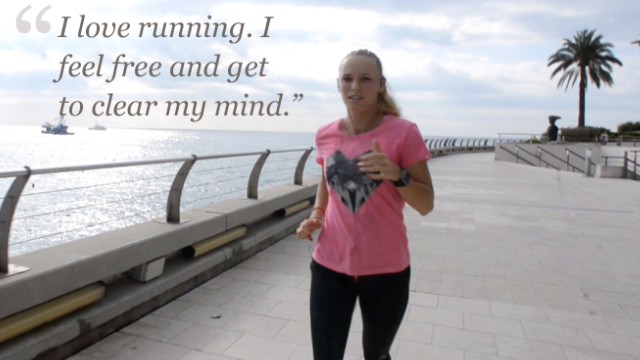 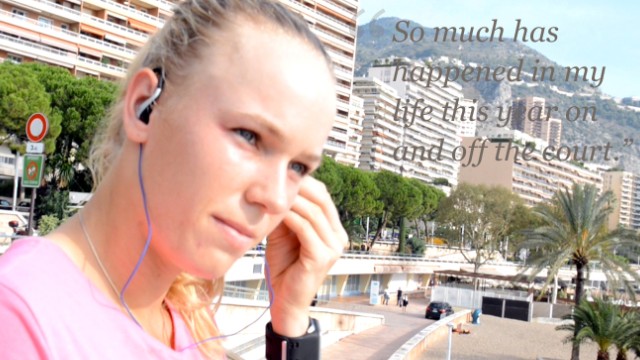 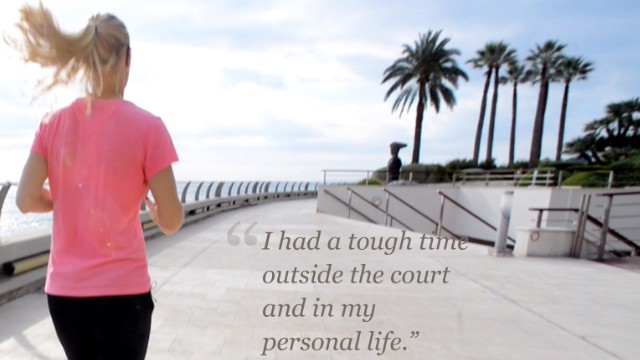 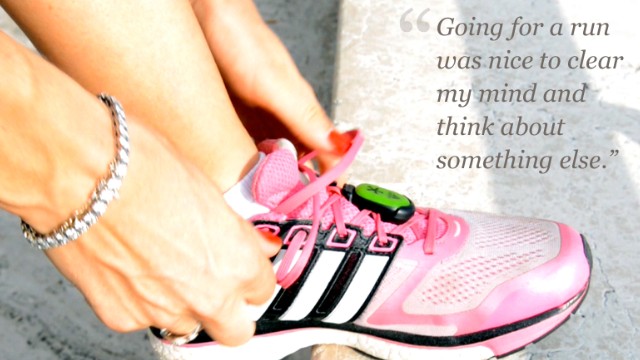 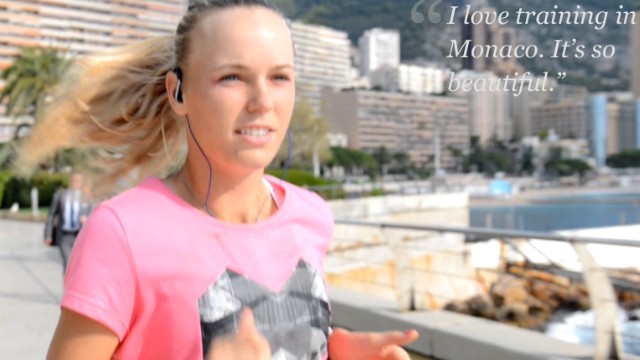 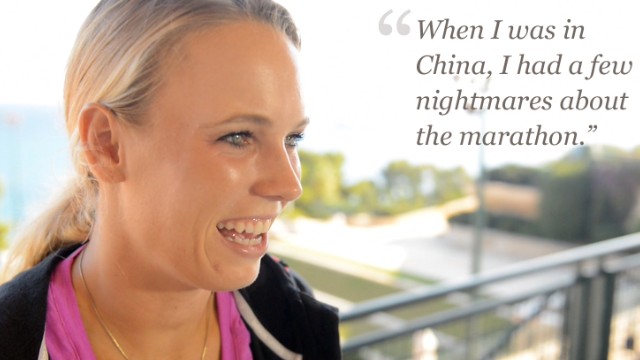 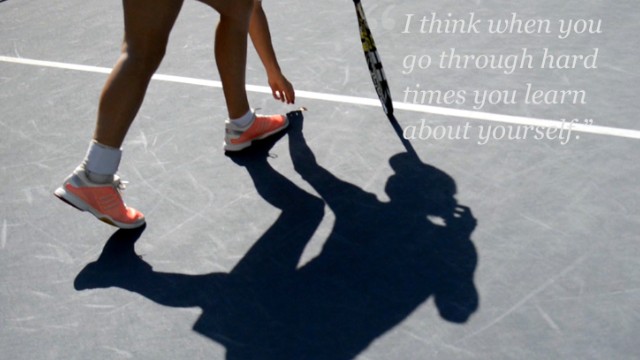 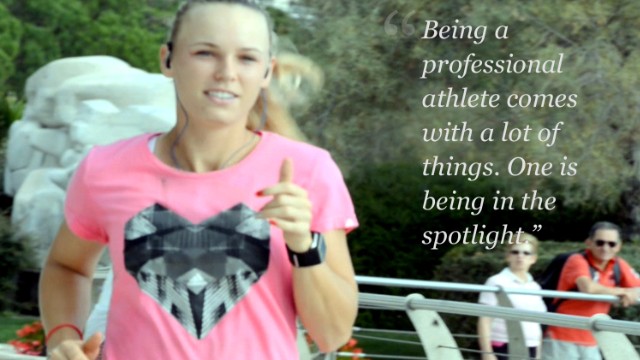 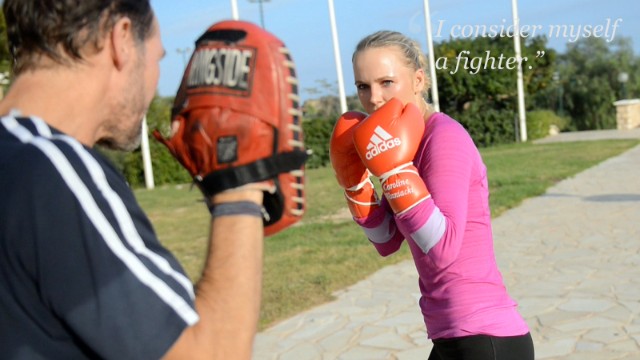 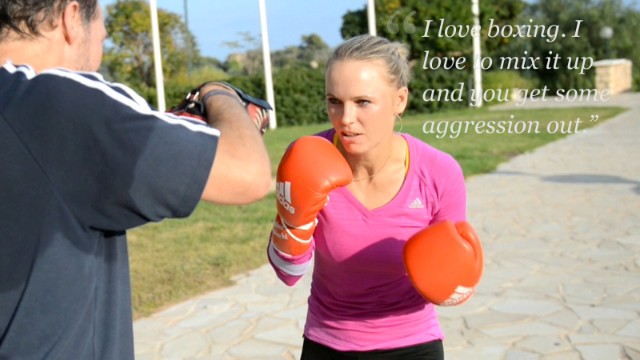 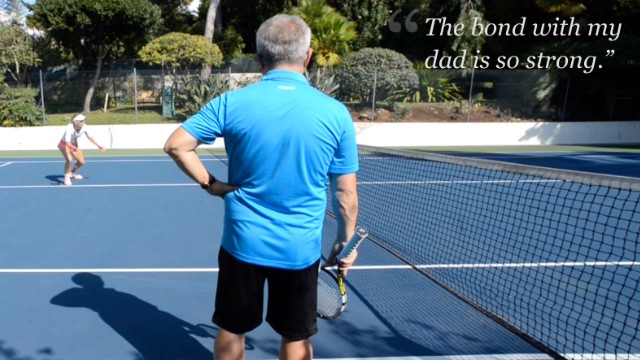 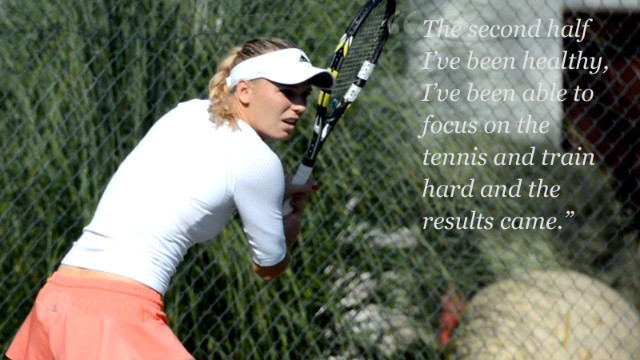 (CNN) -- Caroline Wozniacki is known as one of the fittest players in tennis, but even the rejuvenated Dane is feeling anxious as she prepares to take part in the New York City Marathon in early November.

Wozniacki admits to having nightmares about the grueling 26.2-mile race, which comes just a week after the season-ending WTA Finals conclude in Singapore.

"I dreamed one time that before I even got to the start line I was dead," Wozniacki laughs during an interview with CNN's Open Court. "Or I dreamed that someone had to get me through the finish line in a wheelchair.

"So I don't know if I am that confident but I'm starting to get there. I definitely have a finish goal in mind but I want to keep it to myself."

Wozniacki is competing in the marathon for charity, capping a rollercoaster 2014 in which the former world No. 1 suffered an array of injuries and a high-profile split with top golfer Rory McIlroy before making her first grand slam final in five years at the U.S. Open.

She then continued her resurgence with good form on the WTA Tour's Asian swing, clinching a place at the elite eight-woman championships for the first time since 2011.

"The running has definitely helped," she says. "In the middle of the year I had a tough time outside the court and in my personal life.

"Just going for a run was nice to clear my mind and think about something else. Then you feel great about yourself as well. You get fit."

Still, if you think Wozniacki is crazy for deciding to take part this year after tennis' tiring 10-month hop around the world, you aren't alone.

Her dad and fitness coach both thought the same.

And while two-time grand slam winner Andy Murray plans to one day run a marathon, he won't do it until he is retired.

"That's an amazing effort, she's doing that while playing, because it takes a lot of training, a lot of hard work," he told reporters in Cincinnati in August.

Wozniacki brought up the idea during a grass-court tournament in Eastbourne, England in June, where her career revival began.

"I was sitting there with my dad and my team and I was like, 'Hey, I'm going to run the New York City Marathon' and my dad was like, 'No you are not,' " says Wozniacki, now ranked ninth.

"So I made the phone call right there and then to my agent John (Tobias) and I said, 'John, look up charities I can run for.'

"He was like, 'Funny joke' and I said, 'It's not a joke, I'm serious.' He came with a list that evening and I checked them out."

Wozniacki eventually settled on Team for Kids, which according to the New York Road Runners' website, provides "free low-cost health and fitness programs to kids who would otherwise have little or no access to regular physical activity."

Sports has always been an important part of the Wozniacki family, with dad Piotr a former pro footballer, mom Anna a former volleyball player and brother Patrik also into football in Denmark.

Running a marathon had always been on her "bucket list," too, although it seems unlikely that Wozniacki would have participated this year had she and McIlroy not gone their separate ways. It was McIlroy who broke off the engagement.

They were reportedly due to wed in November -- in New York.

Wozniacki has stepped up her training while maintaining a full tennis schedule -- prior to losing to Serena Williams in last month's final at Flushing Meadows she told reporters how she believed it had helped her on-court fitness.

She has run a half-marathon and through tennis may be equipped to deal with the "mental battle" faced by distance runners.

"I know the marathon is breathing down my neck so I know I need to get out and run and it's great for me," she says. "I love it.

"I think running a marathon is very mental. It's definitely a mental battle with yourself out there and I think that's the same on the tennis court.

"Sometimes you are hitting the wall out there and you can't seem to get the points together but you just need to keep focusing, take one point at a time and somehow you manage to turn it around. I think it's the same in the marathon."

Her reward when she gets to the finish line?

"I told my friends and my manager to have chocolate and some sweets waiting for me," she said. "We are definitely going to go out for a very unhealthy dinner afterwards."