"Help! A fake version of my restaurant opened in China." 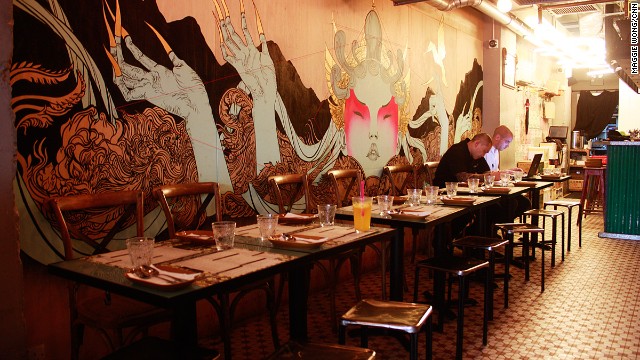 Chachawan, a Thai restaurant in Hong Kong, has inspired a clone in Shanghai. This is the real one.
STORY HIGHLIGHTS

Editor's note: Update: On October 28, CNN was notified that alleged copycat restaurant Chachawan in Shanghai reportedly changed its name to StreeTHAi. The restaurant's name has been updated on food review blog DianPing as well.

(CNN) -- Hong Kong restaurateur Yenn Wong got quite a surprise one morning earlier this month.

The co-founder of popular Hong Kong restaurant Chachawan Isaan Thai and Bar, Wong woke up and logged onto her computer to find a friend had forwarded her multiple images of a second Chachawan restaurant in Shanghai.

In addition, Chachawan's Facebook page was filled with enthusiastic inquiries asking if the shop had opened a new branch in Shanghai.

The Shanghai Chachawan bore the hallmarks of her successful Hong Kong eatery.

It had the same exterior look and feel as the Hong Kong shop.

Even the menu, focusing on northeastern Thai -- or Isaan -- cuisine, looked the same.

Opened earlier this month, the Shanghai restaurant had already earned scores of 5/5 stars from six of its eight reviewers on Dianping, China's crowd-sourced food forum.

Given that she had no plans to expand her operations to Shanghai, the copycat Chachawan stunned Wong.

"It is extremely disappointing to see the restaurant in China has used not just the Chachawan name, but also our exact logo and font which was designed specially for us," Wong tells CNN.

"They have also used a very similar retro-poster theme for their interior and marketing materials, as well as other elements of our interiors," says Wong.

"We feel this is such a disrespect to the hard work and creativity that our own team, graphic designers and local artists have put into Chachawan Hong Kong."

A collaboration between Wong and chef Adam Cliff, Chachawan gained instant popularity upon its opening in 2013 and has remained one of the hottest no-reservation restaurants in Hong Kong.

Both the manager and a staff member at the Shanghai Chachawan tell CNN they have no idea about the existence of the Hong Kong Chachawan.

To their knowledge, theirs is the only Chachawan in China, they say.

The manager, surnamed Guo, said the restaurant's name and logo are the responsibility of a marketing department manager who was not made available for contact.

"I'm surprised that they say they have no idea about Chachawan since the owners have dined at Chachawan [in Hong Kong], and in fact had formal meetings with chef Adam Cliff and owner Yenn Wong in April this year, expressing their interest in taking the concept to [mainland China], which was declined," says Kiri Sinclair, a public relations spokesperson for Chachawan in Hong Kong.

A 2011 blog post depicting the brilliant ripoff of an Apple Store in Kunming -- which copied nearly every element of the store, including the friendly blue-shirted staff -- went viral, leading to a reported government clampdown.

Some 22 illegal stores were identified and forbidden to use the Apple logo. 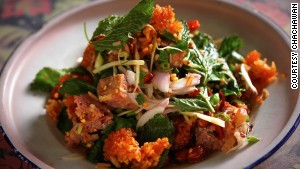 Chachawan isn't the first restaurant to suffer the indignity of a mainland knockoff.

More than 200 "Rikuro" stores are still operating in China.

After Chinese President Xi Jinping was spotted lining up for steamed dumplings at one of Beijing's Qing-feng steamed dumpling chain shops, the store began attracting even longer-than-usual queues ... as well as imitators.

A Qing-feng dumpling shop in Zhengzhou was discovered shortly thereafter to be operating without a franchise agreement from the original store, nor a proper business license.

Though it hasn't yet taken action against its imitator, the Chachawan team in Hong Kong says it's seeking legal advice.

The difficulty in pursuing legal action in China often stems from lack of awareness about steps needed to protect one's trademark.

"Generally speaking, a lot of people don't understand the concept of registering the name of their restaurant or store as a trademark," says Hong Kong-based Rosita Li, an intellectual property partner in global law firm Mayer Brown JSM..

"Even if they understand the concept, they may just have registered their name in the location where they have operations. It never occurs to them that there may be people copying their name.

"And it's difficult to prove your name is well-known in China, where the threshold is high, as well."

According to Dr. Yahong Li, an associate professor of law at Hong Kong University, attaining legal redress in such cases in China is often difficult.

"Chachawan can take legal action only if it has registered its trademark in China, or can prove that its mark is well-known in China," Dr. Li tells CNN. "Otherwise, it has a very slim chance to win and I do not recommend suing."

To Chachawan's owners, however, the issue has moral as well as financial implications.

"We serve authentic Isaan cuisine and the concept was put together exclusively by myself and Yenn Wong after a great deal of research and my own experience of having worked and lived in Thailand," says chef Adam Cliff.

"It is upsetting to have someone else ride on the reputation and success that has come from so much hard work, creativity and passion."