Foo Fighters get Letterman choked up 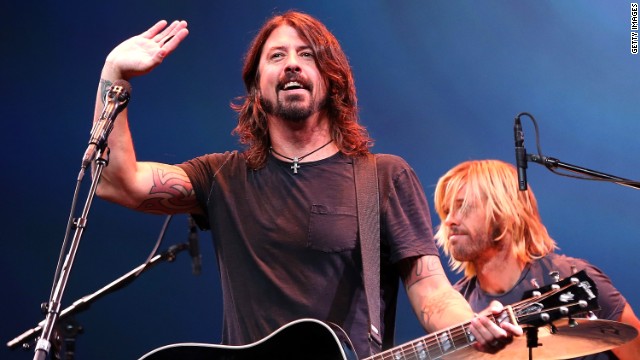 Dave Grohl and the Foo Fighters have been playing on David Letterman's "Late Show" all week.
STORY HIGHLIGHTS

(CNN) -- The Foo Fighters have made the most of their week-long residency on "The Late Show with David Letterman" -- and they've even moved the host to the verge of tears.

On Wednesday's after-show (which is available online), Letterman told the story of how the Foos' "Miracle" provided the soundtrack for one of his most significant moments as a father: learning to ski with his then-4-year-old son, Harry.

As Letterman tells it, he was hoping to find a bonding experience as the 60-something father of a young child and decided to try skiing. After several days of skiing, the instructor concluded his lessons by taking a video of the pair coming down a mountain in Montana's Madison Range. Letterman said he forgot about the video until three weeks later, when a package arrived in the mail.

"Lo and behold, it's me and it's Harry coming down this mountain," Letterman said, his voice clouding with emotion. "The video is stunning because the kid couldn't be cuter ... and the music the guy chose to put underneath the ski video is the song you're going to hear now from the Foo Fighters."

After the performance concluded, Letterman added, "You see what I mean? That's pretty good!"

The Foo Fighters have been dazzling all week long. On Monday, they brought out Zac Brown for a version of Black Sabbath's "War Pigs." Tuesday found them collaborating with Heart's Ann and Nancy Wilson on "Kick It Out." And on Wednesday's show, singer-songwriter Tony Joe White joined the band for a bluesy version of his biggest hit, "Polk Salad Annie."

The group and Letterman have a history. After his heart surgery in 2000, the host requested that the group appear on "Late Show" and play "Everlong."

"Ever since that day, we've been in love. I don't know how many times we've played that show, but every time we do and I stand in the Ed Sullivan Theater, I never take that for granted," frontman Dave Grohl told the Orange County Register.

The band's latest album, "Sonic Highways," is due November 10. A companion TV series will air on HBO (which, like CNN, is a unit of Time Warner).