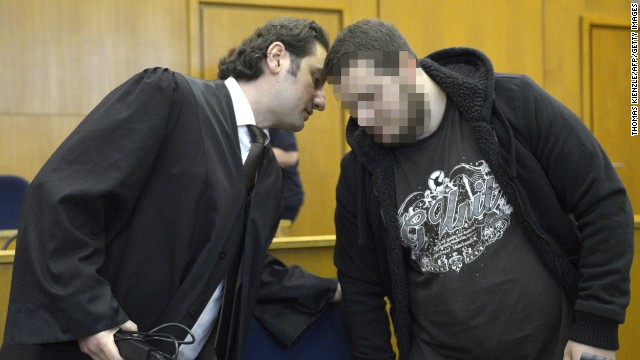 German alleged jihadist Kreshnik B (R) listens to his lawyer Mutlu Guenal (L) as he arrives at the higher regional court in Frankfurt. His face is pixelated for legal reasons.
STORY HIGHLIGHTS

(CNN) -- At first Alon Meyer thought it was a bad joke.

When Kreshnik Berisha, the first suspected member of ISIS to stand trial in Germany, was arrested upon his arrival back in Frankfurt in December after spending six months in Syria, youth team football coach Meyer was left shell-shocked.

The coach thought for a while and then it slowly sank in -- this was the same boy who had once stood by his side and taken the field in the shirt of Makkabi Frankfurt, Germany's largest Jewish sports club.

Meyer's phone began to buzz with journalists trying to ask him whether he remembered Berisha, a 20-year-old born in Frankfurt to Kosovan parents.

"I didn't think it was serious -- I remember when the journalist told me, I didn't believe it," said Meyer, who is also the president of the 40 different Makkabi clubs in Germany, which he says has some 4,500 members.

"This was a guy who used to play with Jewish players every week, he was comfortable there and he seemed so happy.

"He was a normal player, never shouting too much and was fighting on the field with his friends.

"We are a Jewish club with a Jewish heart -- and everybody who has been involved with us knows that.

"Now, within three years, he's back in Germany facing prison having left us and been radicalized.

Berisha is expected to receive a sentence of between three to four-and-a-half years for allegedly being a member of a foreign terrorist organization. Judge Thomas Sagebiel is offering a more lenient sentence than usual in exchange for a confession and information about ISIS.

"We don't want to destroy his future with all our power," said Sagebiel during the trial last month.

A sentence is expected to be handed down in the coming weeks.

In a written statement read out by his lawyer during the court case, Berisha explained his motivation for traveling to Syria via Turkey in July 2013.

"The inconceivable violence used by the Alawite Assad regime against the Sunni majority was enraging and bewildering. No-one wanted to help the people there," it said.

"I saw it as my duty to fight against the suppression and tyranny."

Statistics provided to national newspaper Die Welt by the German intelligence agency, Bundesamt für Verfassungsschutz, states that around 450 Germans have traveled to fight in Syria.

According to German media, Berisha was radicalized while studying construction engineering at college.

In his statement, Berisha told the court how he was hoping to lead a normal life after serving out his sentence.

While he awaits his fate, those who used to share the same football field as him are still reeling.

"His old teammates were very shocked -- they didn't know how to react," Meyer said.

"They couldn't believe it, nobody has contact with him.

"He was moving out of the area and people lost contact with him."

Makkabi Frankfurt has 1,300 members and gives opportunities to the wider community to take part in an array of activities.

With 30 sports on offer and 23 different football teams for ages as young as four all the way through to 55, it is a club at the very center of the Frankfurt community.

It has opened its doors to everyone in the past decade, with Meyer insisting Makkabi Frankfurt "does not talk about integration, it lives integration."

"A few people in the community were shocked and called me to discuss what we should do," he said.

"They asked whether we should go back to just looking after our own but I said we cannot do that because of one person.

"This is a club for everybody and we want everybody to come and play together.

"We have opened ourselves up to everybody and that is how we live."

Read: Why Italian football needs to change -- or 'die'