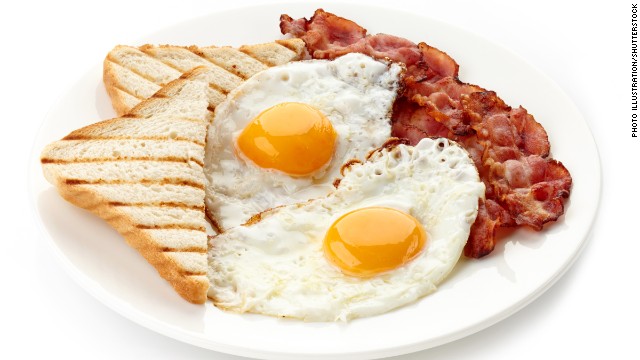 Munching in the morning doesn't have a direct effect on dropping pounds.
STORY HIGHLIGHTS

(Life by DailyBurn) -- The first meal of the day can have a very different meaning for different people. For some, it's grabbing a granola bar to nibble on during the morning commute; for others, it includes a big omelet with a cup of coffee at home.

Then there are the millions who forego grub in the a.m. altogether.

But how do these morning behaviors really affect weight loss, energy levels and appetite throughout the day? In order to help you crack the breakfast code, we tracked down the latest research, in addition to insights from Katherine Zeratsky, a nutrition instructor at the Mayo Clinic in Rochester, Minnesota.

Before you do -- or don't -- dig in, here's a reality check on the biggest breakfast myths:

What is a 'breakfast of champions?'

Reality: Munching in the morning doesn't have a direct effect on dropping pounds.

A recent study published in the American Journal of Clinical Nutrition found that when people are trying to lose weight, it doesn't matter if they devour a dish first thing after waking up or if they skip it altogether.

The researchers assigned more than 300 overweight and obese (but otherwise healthy) individuals, ages 20 to 65, to either the control group (that continued with eating habits per usual), a group that was told to eat breakfast or a group that was instructed to miss the meal. After tracking their weight for 16 weeks, the scientists found that those who grabbed a bite in the morning didn't lose any more weight than those who omitted a.m. snacks.

But take this finding with a grain of salt.

"Though our study suggests breakfast may not be key to weight loss, we only examined a general recommendation of eating versus skipping," says Emily Dhurandhar, assistant professor at the Department of Health Behavior at the University of Alabama Birmingham and a lead author of the study. "Specific foods and timing may help," so if weight loss is the goal, consult with a nutritionist or doctor to determine your best course of action.

Reality: Sure, you should lay off the sweet stuff, but not necessarily the cereal itself.

Lucky Charms, Cocoa Puffs and Fruity Pebbles may taste delicious, but they aren't packing a nutrient punch. That's not to say that other cereals on the market can't be a part of a healthy, balanced diet.

In fact, an Advances in Nutrition study found that whole-grain cereal can lower cholesterol (the soluble fiber prevents re-absorption of the substance in the gut). These slow-digesting carbs can also improve bowel function (the fiber content softens stool and promotes good-for-you bacteria in the digestive system), and help maintain a healthy weight.

DailyBurn: 5 intermittent fasting methods: Which one is right for you?

The best choices when searching the shelves? Oat and barley mixes work best for those keeping an eye on cholesterol levels, and wheat bran is ideal for those with gut problems, says Peter Williams, honorary professorial fellow at the University of Wollongong in Australia and one of the study's researchers.

Williams suggests portion sizes of about one-third to one-half cup of a heavy cereal, like muesli, or one cup of a light cereal, such as puffed grains.

Myth 3: You should eat a meal to fuel your a.m. workout.

Reality: Food will increase your energy; just consider your activity of choice.

As for whether a morning meal will help you power through a workout, the answer is most likely. Research from the University of Bath in the United Kingdom found that those who ate breakfast had higher energy expenditure in daily physical activity over a six-week period, compared to those who fasted until noon.

The study authors suspect that this effect can occur on any given day breakfast is eaten (discounting a long-term effect), because the improvement in energy levels was apparent from week one, says James Betts, research scientist and senior lecturer in the Department of Health at the University of Bath and lead author on the study.

Betts and his team also found high glucose levels in the breakfast-eating group, which signals to the brain and central nervous system that there's energy available and motivates you to move.

"You may realize the quality of your physical performance that day is not critical, say if you're performing simple housework, so you opt for skipping breakfast to take advantage of the negative energy balance," explains Betts. "Or you may decide that you need breakfast to support your energy needs and perform to the best of your ability."

Either way, breakfast can help support an active lifestyle.

Myth 4: Grabbing a bite before work will help you eat less later.

Reality: It's not guaranteed to reduce calorie intake in the afternoon, but eating in the morning does release chemicals to the brain and can also steady glucose levels throughout the day.

A new study just released from the University of Missouri found that having breakfast, particularly dishes high in protein, increased young adults' levels of dopamine (a brain chemical responsible for moderating impulses and reward), which may reduce food cravings and overeating later in the day.

Eating initiates a release of this neurohormone, which then triggers feelings of reward, explains Heather Leidy, an assistant professor of nutrition and exercise physiology at the University of Missouri and author of the study. That reward response, Leidy adds, is what helps people regulate how much they chow down.

If someone has eaten three meals in a given day and they're still munching in the evening, that usually due to reasons other than hunger, like convenience, boredom, stress, or a reward, says Zeratsky. But that doesn't necessarily mean eating breakfast will stave off late-night cravings. The above-mentioned University of Bath study found that having breakfast didn't suppress caloric intake later in the day but that it did, however, regulate glucose levels in the afternoon and evening.

The benefits: "More variable glucose levels can indicate a poorer diet or a more unsteady metabolism," says Betts. "And chronic inflammation from the body's excess exposure to glucose can lead to issues like diabetes or cardiovascular disease."

So while breakfast might not help you cut back on calories, it may cut disease risk.

Myth 5: Breakfast is the most important meal of the day.

Reality: It's less about one meal than it is about what you eat over the course of the day.

According to the above recent research, weight loss isn't necessarily tied to breakfast habits. It comes down to calories instead.

"It's the total number [of calories] that matters, whether you divide that into two meals or six," says Zeratsky.

But again, that doesn't give you a free pass to skip breakfast every day. Having some foods to start out the day can promote a nutrient-rich diet overall, Zeratsky says.

Her go-to power meals: "energy foods," including fruits and whole grains and "hunger-controlling" foods like milk, yogurt, or eggs. If you are working out in the early a.m., opt for something smaller (particularly if you have a sensitive stomach), such as a banana or whole-grain bread with peanut butter or honey. If you do choose to eat early in the day, be sure it's something healthy that will do your body good.