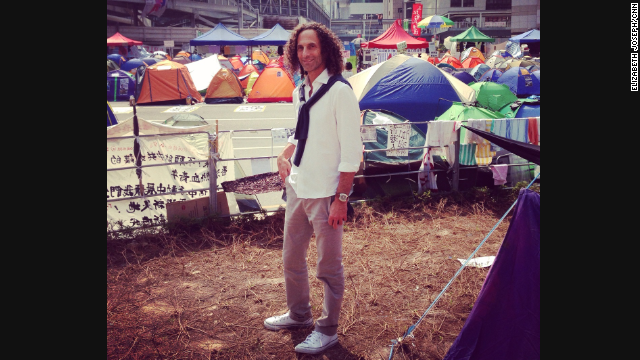 CNN's Elizabeth Joseph saw jazz musician Kenny G walking around the Hong Kong protest site on October 22 and took this photo, which quickly went viral. The musician also took a selfie, which has since been deleted.
STORY HIGHLIGHTS

Pleading ignorance, the musician has deleted a selfie he took at Hong Kong's pro-democracy protests after the Chinese Foreign Ministry — which has claimed the protests are fueled by outside agents — declared Kenny G was participating an "illegal activity."

In a panicked social media message, the musician insisted "I am not supporting the demonstrators."

"I was not trying to defy government orders with my last post," he wrote on Twitter. "I don't really know anything about the situation and my impromptu visit to the site was just part of an innocent walk around Hong Kong."

Who's who in the Hong Kong protests?

Kenny G is hugely popular in China. One of his tunes, "Going Home," is played in shopping malls and train stations at closing time, and is even used as a ringtone or a doorbell chime.

His surprise visit on Wednesday had excited pro-democracy supporters in the city, where protests against Chinese restrictions on Hong Kong's election system have continued into a stubborn fourth week.

Demonstrators initially saw his visit as show of support, only to become angry when the artist explained that wasn't true.

"It comes across as if you are protecting your own capitalistic income and your own brand... yet Hong Kong is fighting for its life," wrote the most-liked response to Kenny G's message.

"Very disappointing and cowardly of you to offer this pathetic clarity."

Kenny G isn't the only celebrity to draw the ire of Beijing during the protests.

According to Hong Kong media, Chinese propaganda officials have ordered state-run media to erase any mentions of 47 celebrities who are believed to support the Hong Kong protests, including martial arts star Chow Yun Fat.