Serbia and Albania punished by UEFA after drone brawl 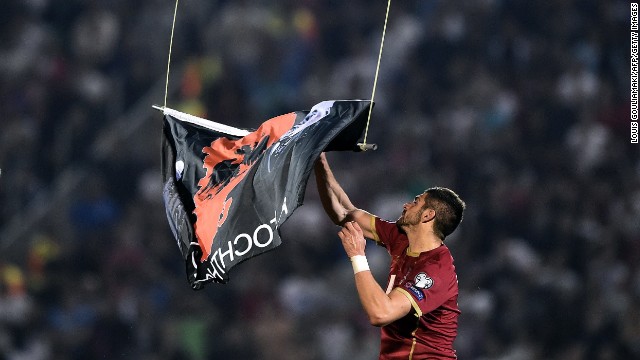 Albania's tie against Serbia in Belgrade had to be called off following a brawl between both sets of players. A drone flew over the stadium with a flag emblazoned with Albanian symbols, which was taken down by home player Stefan Mitrovic. A melee ensued with police taking to the field with the contest abandoned after 41 minutes. 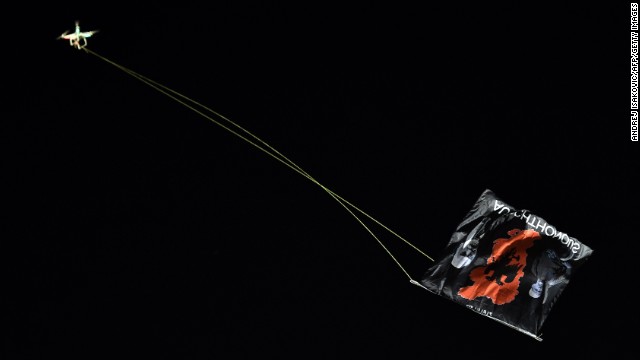 The drone's entry into the field sparked ugly scenes between rival players. 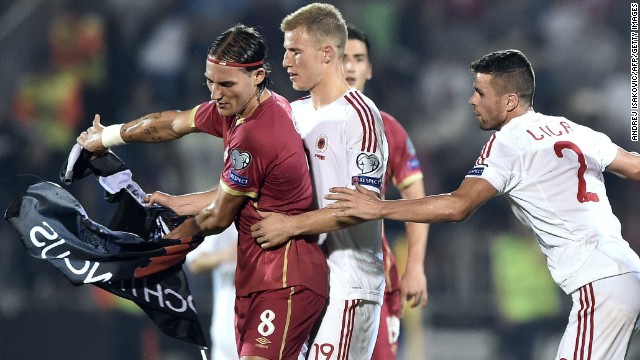 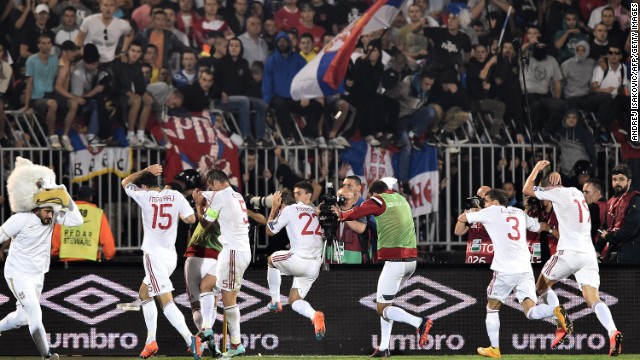 Albania's players ran from the field following the clashes with Serbian players. 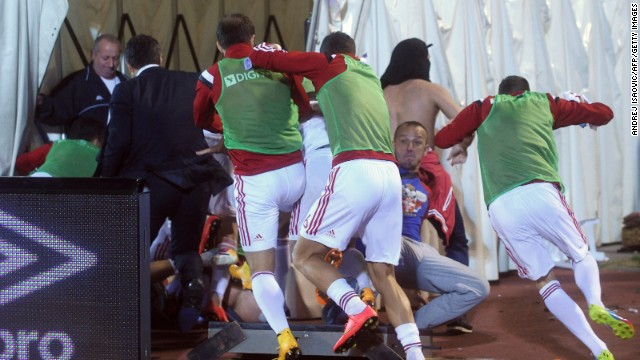 Albania's players made their way to the safety of the dressing room as events began to turn nasty. 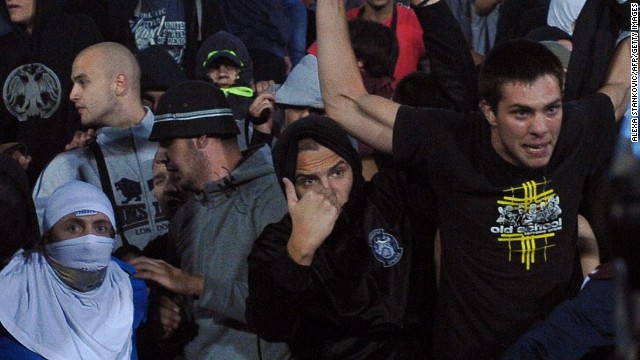 Police were brought in to deal with Serbian supporters as tensions continued to rise throughout the evening. 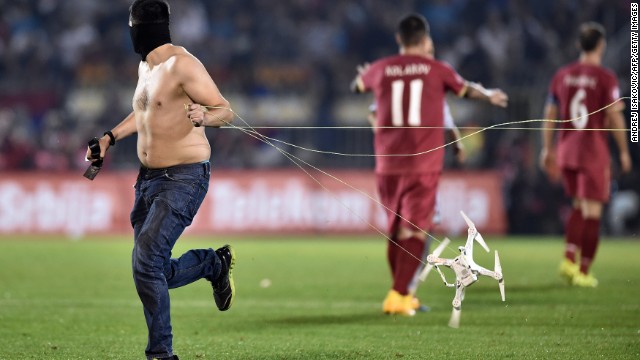 A fan drags the drone behind him after invading the pitch at the Stadion Crvena Zvezda. 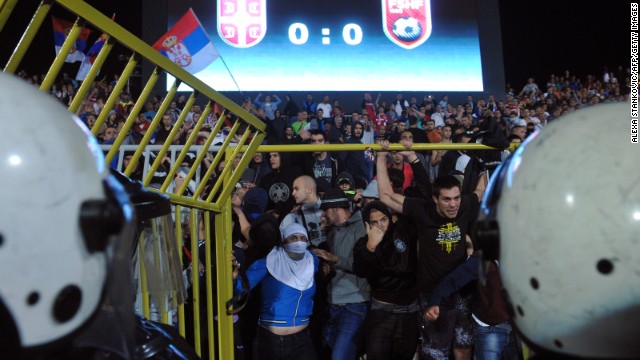 Riot police clashed with Serbian supporters as the situation escalated. 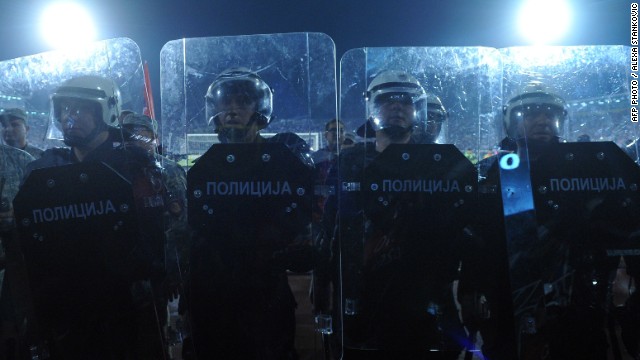 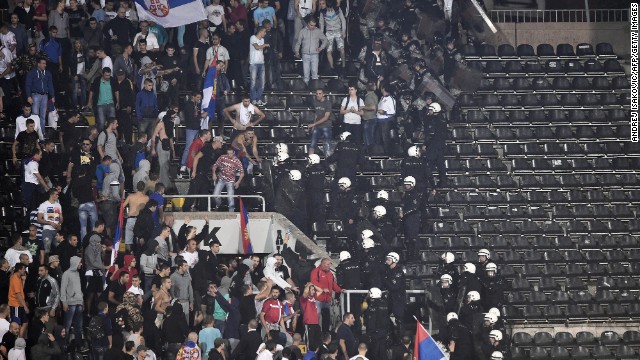 (CNN) -- It was a night which evoked hatred of years past -- now both Serbia and Albania have been punished for their part in dramatic night of violence in Belgrade.

Last week's Euro 2016 qualifying match was abandoned after 41 minutes following a brawl sparked by the arrival of a drone carrying a flag emblazoned with the insignia of 'Greater Albania.'

Serbia has also been told it must play its next two Group I qualifiers behind closed doors while both football associations have been fined $126,410.

In a statement, UEFA's Control Ethics and Disciplinary Body (CEDB) confirmed the punishment.

"The CEDB has decided to declare the above-mentioned match as forfeited. As a consequence, the Football Association of Albania (FShF) is deemed to have lost the match 3-0. In addition, the FShF has been fined €100,000 ($126,410)

"The CEDB has also decided to deduct the Football Association of Serbia (FSS) three points for the current UEFA European Championship qualifying competition. In addition, the FSS has been ordered to play its next two UEFA competition matches as host team behind closed doors. Finally, the association has been fined €100,000."

Under UEFA's disciplinary rules, the two nations are allowed to appeal the European governing body's decision.

Serbia were formally charged with crowd disturbance, setting off fireworks, a pitch invasion, "insufficient organization" and the use of a laser pen.

Albania were charged for the "display of an illicit banner" and refusing to play.

The incident shocked the world of football as ethnic tensions between the two countries flared.

The 'Greater Albania' insignia, which was attached to the drone, refers to the idea of an extended area in which all ethnic Albanians reside -- one which would include Kosovo.

The two illustrated figures on the flag were Isa Boletini, an Albanian nationalist who led uprisings against the Serbs and Ottomans in 1912 and 1913, while the other, Ismail Qemali, is considered to be the founder of the modern Albanian state, which became independent in 1912.

The word "Autochthonous," which refers to an indigenous inhabitant of a place, was emblazoned at the bottom of the flag and is considered an offense to Serbians.

When Serbian player Stefan Mitrovic took the flag down, it provided the catalyst for an already combustible tie to fully ignite.

Albanian players ran from the field, a number of missiles and flares were thrown from the stands by some home supporters, while images from photo agencies showed fans invading the pitch.

The visiting side also claimed its team bus was targeted by hooligans before the contest.

Security had been tight in the lead up to the contest in Belgrade with away fans prevented from attending amidst heightening tensions over Kosovo -- a majority-Albanian former Serbian province which declared independence in 2008.

In 1999, a 78-day air war was launched by NATO to stop the killing off ethnic Albanians in Kosovo by Serbian forces.

Kosovo's independence is recognized by many countries including the United States, the United Kingdom, Germany and France -- but not Serbia.

Albanian Prime Minister Edi Rama had been scheduled to visit Belgrade on October 22 -- the first such visit by an Albanian leader in 68 years.

His visit, which will now take place on November 10, comes after his own brother, Olsi, was accused of piloting the drone inside the stadium by a Serbian government official -- an allegation he rejected.

"Today the justice has not been served regarding what had happened at the Belgrade stadium," the Albanian Prime Minister tweeted.

The Albanian Football Association confirmed to CNN it is ready to appeal against the decision.

Armand Duka, head of the association, told CNN that the "punishments are clearly not proportional."

He also denied suggestions that Albanian players had refused to continue the contest following their departure from the field of play, labeling those allegations as a "product of pure fantasy".

"The Albanian team never refused the resume of the match," added Duka.

"The Albanian players declared that they were physically and mentally unable to play a football match.

"There is no reference in the official reports that emptying the stadium was the proper way to restore the security conditions.

"If in the opinion of the UEFA officials, this was the right thing to be done, they should empty the stadium and then resume the match and invite the Albanian players in the pitch, if they consider Albanian players as fit to play.

"We cannot regret a decision which we had not reached. It was inability to play, not refusal."