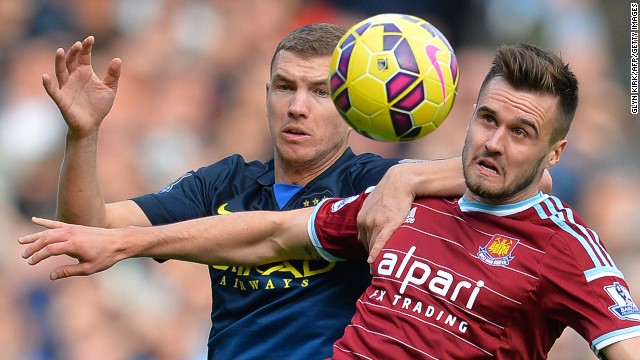 The disappointing league result comes off the back of another lackluster display in the Champions League in midweek which saw Manuel Pellegrini's side squander a 2-0 lead against CSKA Moscow to eventually draw the match 2-2.

On Saturday, it was City who found themselves two goals down after West Ham's French midfielder Morgan Amalfitano opened the scoring in the 21st minute before Diafra Sakho netted again with 15 minutes remaining.

The Senegalese striker's sixth goal in as many league games ultimately sank City who managed to pull one back through David Silva but couldn't find an equalizer.

"We had a lot of chances to score but it is difficult to win if you don't take them," City boss, Pellegrini said.

"I don't think it was a fault of our team for the performance in the first half, it was more about the intensity of West Ham and you must credit them for that. We are just starting the season, we have 80 points left to play for. So it is early.

"We will continue fighting because there is no title being handed out at the moment."

The win keeps West Ham in fourth place with 16 points, one point behind City who failed to make up ground on league leaders Chelsea.

Jose Mourniho's side will extend their advantage to eight points over City if they beat Manchester United at Old Trafford on Sunday.

Elsewhere, there were wins for Southampton who rise to second place thanks to a 1-0 win over Stoke City.

Ronald Koeman's side kept the winning habit with their sixth victory in seven league matches and now have 19 points from nine matches.

Alexis Sanchez scored a brace to give Arsenal all three points against Sunderland -- the Black Cats have now conceded 10 goals in two matches after shipping eight last weekend.

The win gave Arsene Wenger a first league win in four matches and lifts the Gunners up to fifth with Swansea City one place behind following a 2-0 win at Leicester City.

Liverpool could only draw 0-0 at home to Hull City -- a result which sees Brendan Rodgers' side slip to seventh in the table. West Bromwich Albion and Crystal Palace also shared the points in a 2-2 draw at the Hawthorns.

Borussia Dortmund's nightmare start to the Bundesliga season continued with a fourth straight league defeat on Saturday against Hannover 96.

Hiroshi Kiyotake's 62nd-minute winner consigned Jurgen Klopp's team to a third home defeat of the league season and a sixth loss in all.

Their spectacular lack of league victories -- the latest defeat leaves Dortmund hovering above the relegation places in 15th -- is in stark contrast to the club's Champions League form where they are riding high in Group D with three wins from three matches.

Compare that to a league run that has yielded one point in the last six games.

"We can't do more, but we can do things better, Klopp said following the latest setback.

"We aren't in a good situation in the Bundesliga and that's something we haven't come to terms with until now. We'll continue to fight, the opponent made a lot out of little, we made nothing out of a lot."

There was little to lift the gloom at Werder Bremen either as their manager Roger Dutt was shown the door on Saturday following Friday's 1-0 loss to FC Cologne.

Bremen are without a win this season and are currently anchored to the foot of the table with four points from nine matches. The club has appointed under-23 coach Viktor Skripnik as caretaker manager until a full time replacement can be found.

There was joy, however, for Stuttgart who claimed all three points in a 5-4 win at Frankfurt. Martin Harnik and Christian Gentner both scored braces as the visitors leapfrogged Dortmund into 14th place.

There were also wins for Augsburg who rise to ninth and Hertha Berlin who move up to 11th.

At the business end, Hoffenheim move up to second after a 1-0 win over Paderborn while Leverkusen's 1-0 victory over Schalke lifts Roger Schmidt's side to fourth.

Bayern Munich will go six points clear at the top of the table if they beat Borussia Monchengladbach on Sunday.

Read more: Was it wrong to ban Luis Suarez?