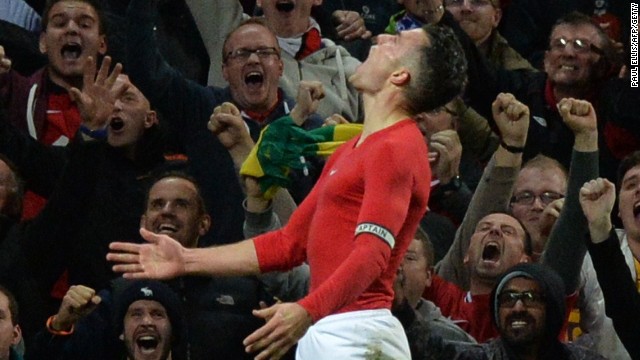 United was staring defeat in the face after trailing to a Didier Drogba goal when Angel Di Maria won a free kick which led to the dismissal of Branislav Ivanovic for a second yellow card.

Di Maria's delivery was met by the excellent Marouane Fellaini and after Thibaut Courtois pushed out his headed effort, van Persie smashed the ball home.

Chelsea stays top of the EPL by four points from Southampton, with United back in eighth and 10 points adrift.

Eyebrows were raised when Jose Mourinho re-signed the 36-year-old Drogba in the summer, but the Ivorian star rolled back the years with his second half effort.

David De Gea had to make a superb save from Eden Hazard, who was clean through after a one-two with Drogba.

But from the resulting Cesc Fabregas corner, Drogba rose to head home at the near post, his first EPL goal since March 2012.

He took his place in the team after Chelsea's top scorer Diego Costa was ruled out through injury, but more than justified his inclusion.

Tottenham led 1-0 through an Emmanuel Adebayor goal but conceded an equalizer after just eight seconds of the second half, with Sammy Ameobi on target.

Another substitute, Ayoze Perez, added a second just before the hour mark.

In the Bundesliga, Bayern Munich was held goalless by Borussia Moenchengladbach in a top of the table clash.

Bayern hit seven in a midweek Champions League thrashing of Roma, but a David Alaba effort which hit the post was the best it could muster Sunday.

In Serie A, leaders and reigning champions Juventus took a three-point lead at the top with a 2-0 home win over Palermo.

Goals in each half from Arturo Vidal and Fernando Llorente were enough to secure three points for Juve, whose nearest rival Roma was held to a goalless draw by Sampdoria Saturday night.