Revenge so sweet for Serena Williams in WTA Finals showdown 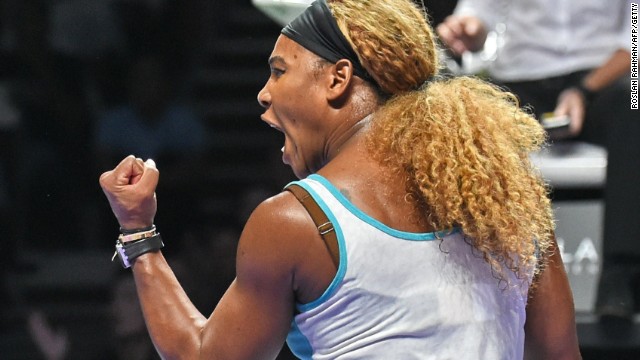 (CNN) -- Four days after suffering a humbling defeat to Simona Halep, Serena Williams turned the tables on the Romanian to win a fifth WTA Finals title with a crushing straight sets 6-3 6-0 victory in Singapore Sunday.

Williams had called her 6-2 6-0 reverse in round-robin group play Wednesday "embarrassing" and she set about putting the record straight in the title match.

Fourth-ranked Halep began where she left off to take an early 2-1 lead with a break of service, but this was a very different Williams on the other side of the net.

What an amazing week @WTAFinalsSG Thanks Singapore,I just loved being here and I already feel home @yoursingapore!See you again in December!

The world number one immediately broke back and a further break to lead 5-3 was the start of eight games in a row without reply.

A total of 26 winners flowed from the racket of the 33-year-old American veteran -- who was winning the end of season crown for the third straight year -- the first player since Monica Seles in 1992 to achieve the feat.

"She was playing so well at the beginning and I told myself to just relax and once I did that I started playing better and making my shots," Williams told the official WTA website.

"I lost to her a couple of days ago so I knew she was capable of playing really well, but I knew I had to play better if I wanted to win.

Williams' participation in the WTA Finals had been in doubt after she pulled out of a warmup tournament in China with a knee injury.

"I wasn't even sure if I'd be able to play here and now I've won the Billie Jean King Trophy again -- it's an amazing feeling," she added.

Her triumph caps an unpredictable year for the 18-time grand slam champion, who won the U.S. Open crown last month, but made shock exits from the other three majors.

She closed out the match with another empathic winner after just 69 minutes and picked up a check for just over $2 million for her efforts.

Halep was the first Romanian to reach the final and only the eighth woman to achieve the feat while making her debut in the event for the top eight players of the year.

The 23-year-old said she always expected Williams to rebound after the earlier match.

"She was more motivated and more focused maybe in this match, and she tried to hit the balls very strong," Halep told gathered reporters.

"I knew she will play better this match because she saw how I play, she saw what she has to do during the match. So she did really well today."