Ease up on the boy who shot albino deer 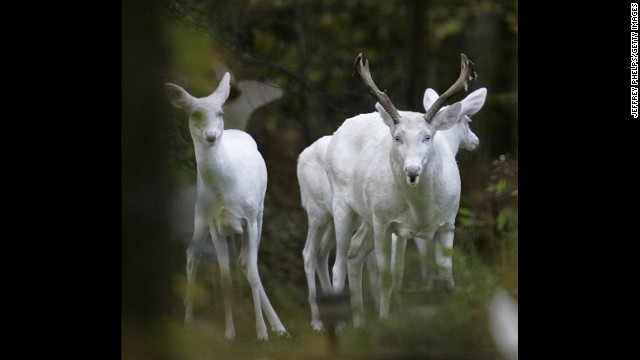 Editor's note: Ruben Navarrette is a CNN contributor, Daily Beast columnist and a nationally syndicated columnist with the Washington Post Writers Group. Follow him on Twitter: @rubennavarrette. The opinions expressed in this commentary are solely those of the author.

(CNN) -- Warning: This isn't exactly a heartwarming story about a boy and his deer. Only one of the characters makes it to the closing credits.

A Michigan boy named Gavin Dingman recently went hunting with his father, and the 11-year-old managed to do something that many skilled hunters would probably find difficult. He killed a 12-point buck. And not with a rifle, but with a crossbow, from 30 yards away. And this was not just any deer. Gavin took down a rare albino buck, which, according to biologists, occur in the genetic pool only once every 20,000 to 100,000 births.

According to what Gavin told the Livingston Daily Press & Argus, his father coached him right up to the moment that the boy pulled the trigger.

Gavin took the shot and killed the animal. Then his father proudly took a photo of the boy smiling over the carcass and posted it on Facebook. The boy hasn't committed any crime and neither has his father.

But the latter did show poor judgment in allowing his son to fire an arrow at such a rare creature, and then he compounded that bad judgment by posting the photo on social media -- despite the fact that not everyone wants to see that sort of thing over breakfast. Even in a era where people want to share everything on social media, a little restraint and discretion would go a long way. Decency eventually prevailed, and the photo was taken down.

There's nothing wrong with a father taking his son hunting, and, in fact, there's a lot right with it. Shared adventures like this create lifelong memories. As a working parent who is trying to juggle it all, I'll go out on a limb and suggest that our society's biggest problem is not that parents and children are spending too much time hunting or fishing or camping.

Still, there are a lot of deer in the Michigan woods. The state has a deer population of 2 million -- far too many, according to the Department of Natural Resources -- and licensed hunting helps keep that figure from getting much higher.

So when this father and son stumbled onto the albino buck, they should have just taken a moment to admire it and let it go on its way. Then they could have continued hunting. It's fine to teach your child how to hunt. But it's also fine to teach him to appreciate and respect those things that are rare, unique and special. In simply killing the animal, I think, father and son made the wrong decision. They have to live with that.

Yet the story doesn't end there. There was more bad judgment just around the corner, mixed with hostility and self-righteousness. The felled deer had defenders -- and, in some cases, they sounded more like avengers. It was as if they wanted justice for the deer.

Or maybe they just wanted to feel superior. Whether the issue is spanking, or whether kids should be allowed to play outside alone, you're always going to have those people out there who can't wait to tell other people how to parent their children. It's obnoxious and offensive, but it's always going to be there.

In the past, I've written about my style of parenting. But I try never to impose it on anyone else. I'm too busy defending myself. Besides, parenting isn't a one-size-fits-all proposition.

Given the times in which we live, it's not surprising that the father would get scolded by complete strangers for encouraging his son to commit what some characterized as "murder."

Really? Where do these people think meat comes from -- the supermarket?

But the really objectionable part is that, every time that photo gets reprinted on social media, Gavin becomes a target. The little boy is being pilloried with hurtful language and even getting death threats, according to the family. Just in time for Halloween, some of the more ghoulish individuals are actually suggesting that the boy get a taste of his own medicine and get shot with an arrow. This is an 11-year-old boy we're talking about. The critics need to take a breath and back off this kid.

Look, we don't have to feel good about how this story ended for the deer, or approve of young people hunting at all. But let's not let the discussion spin out of control.

We don't know how to converse anymore, let alone argue or debate. These days, whether we're talking politics or sports or recreational activities, it does seem more and more that people lose perspective in a hurry. They're so convinced of the righteousness of their cause that they lose sight of boundaries and common sense. And they can live with it all by telling themselves that they're the last hope of civilization.

In this case, a bunch of animal lovers who claim to value life decided to show it by hammering a little boy with death threats. There is nothing civilized about that.