(CNN) -- Explorer Robert Falcon Scott died in 1912 while crossing Antarctica, but his story lives on in artifacts that continue to be discovered on the frozen continent at the bottom of the world.

The most recent find: a century-old photographer's notebook in the ice at one of Scott's expedition bases in Antarctica.

The notebook belonged to George Murray Levick, a surgeon and photographer who was part of Scott's 1910-13 expedition. It contains pencil notes about photos he took in 1911 at Cape Adare.

"It's an exciting find," said Nigel Watson, director of the Antarctic Heritage Trust. "The notebook is a missing part of the official expedition record. After spending seven years conserving Scott's last expedition building and collection, we are delighted to still be finding new artifacts."

The notebook was found in January 2013 at another Scott camp, the Cape Evans base, after the summer snow melt around a building exposed it, said Paula Granger, communications manager for the trust. 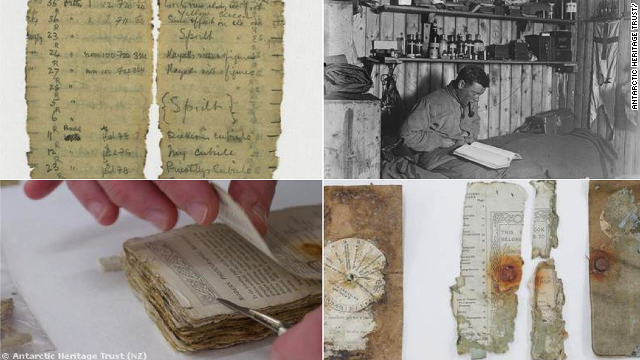 The notebook was found in January 2013 after the summer snow melt exposed it.

The notebook was found in January 2013 after the summer snow melt exposed it.

After 100 years in the ice, the notebook's binding had dissolved, and the pages were stuck together.

The trust hired Aline Leclercq, a paper conservator, to separate and clean the pages, which were digitally recorded. The notebook was rebuilt and sewn back together using cover remnants, the trust said.

The remarks in the notebook refer to photos now held by the Scott Polar Research Institute.

"You can marry up what he's written down with the pictures," Granger said.

Once the notebook was conserved, it was returned to Antarctica, Granger said. It's one of 11,000 artifacts at Cape Evans.

Scott was a British explorer who became famous during what historians call the heroic age of Antarctic exploration. He arrived at the South Pole in January 1912 to discover that his rival, Norwegian explorer Roald Amundsen, had beaten him to the spot by an estimated 33 days.

Scott and several comrades died in March 1912 during the return journey.

The trust said Levick was a member of a group of six men called the Northern Party, which spent the summer at Cape Adare but survived the 1912 winter in a snow cave before going to Cape Evans.

In December, New Zealand's Antarctic Heritage Trust reported finding 100-year-old negatives in one of Scott's huts. The photos were taken during Ernest Shackleton's 1914-17 Ross Sea Party, another failed exploration whose members were forced to live in Scott's hut after their ship blew out to sea.

A notebook full of work-in-progress versions of key Dylan Thomas poems has been found more than 70 years after his mother-in-law ordered it be burnt.
Oldest surviving photo of a human?
updated 9:22 AM EST, Fri November 7, 2014

At first glance, it doesn't seem that remarkable: A black-and-white scene of a strangely deserted city, smudged by primitive photographic process.
Gold mine of cheeky medieval doodles
updated 10:00 AM EST, Mon November 3, 2014

An aircraft recovery group says it may have a part of Amelia Earhart's plane, and it thinks it knows where to find the rest of it.
Wreck of WWII German U-boat found
updated 2:13 PM EDT, Thu October 23, 2014

A World War II German U-boat, sunk during the Battle of the Atlantic more than 72 years ago, has been discovered off the coast of North Carolina.
King Tut's 'virtual autopsy' revealed
updated 1:48 PM EDT, Wed October 22, 2014

Even death couldn't part two skeletons excavated from a lost chapel in an English county, found with their fingers entwined.
How the Victorians dressed for death
updated 9:34 AM EDT, Wed October 22, 2014

Richard III was the last English king to lose his life on the battlefield. Scientists now believe they know how he died.
Items from 2,000-year-old shipwreck
updated 1:00 PM EDT, Fri October 10, 2014

A team of archaeologists has recovered new treasures from one of the most mysterious shipwrecks of all time.
The history of the 'Downton Abbey' castle
updated 11:21 AM EDT, Mon October 20, 2014

Delicate, rare and striking - forgotten photographs of black Britons in the late 19th and early 20th century have been unearthed.
Great maritime mystery may be solved
updated 9:05 AM EDT, Wed September 10, 2014

One of the most famous tragedies of the Northwest Passage sea route around the top of North America might have finally been solved.