Ginger the robot wants to make you LOL

Editor's note: In celebration of International Day of the Girl (October 11) and Ada Lovelace Day (October 14), Leading Women is devoting the month of October to women and girls in STEM: science, technology, engineering and math.

(CNN) -- Robots can be many things -- knowledgeable, dexterous, strong. But can they ever be genuinely laugh-out-loud hilarious?

"If you prick us in our battery pack, do we not bleed alkaline fluid?" asks Ginger the Robot, haltingly throwing up its arms in its best impression of a real-life comedian.

Truth be told, if Ginger were a human it'd be dying on stage. The cute little machine's monotone voice has all the drama of a conveyer belt, while its expression is as vacant as a doll.

Comedic timing is hard to master -- particularly when you have no emotions.

Luckily for Ginger, sitting beside it is comedy sidekick -- and programmer -- Heather Knight.

The living, breathing 31-year-old engineer heads a theater and robotics collective called Marilyn Monrobot. The group runs everything from a Robot Film Festival, to Cyborg Cabaret, and stand-up alongside poor old Ginger.

"I fell in love with the idea that we could collaborate between the arts and robotics," explains Knight, originally from Boston and now a doctorate student at Carnegie Mellon's Robotics Institute in Pittsburgh.

"I was looking for a way to do a performance with a robot, and I was like 'hey, what about a comedy routine on stage?' That way you could make jokes and get real-time feedback along the way," she says with infectious fast-talking enthusiasm.

The unlikely partnership between researcher and robot is not without friction -- at one stage Ginger informs us Knight has been "cheating" on it.

"I caught her collecting videos of other robots," says the knee-high "Nao" robot, created by French robotics company Aldebaran, and popularly used as a learning aid in universities.

"I don't feel pain," says blank-faced Ginger. "But still, that does not compute. I confronted her and she claims she needs to do research with other machines to improve my response capabilities."

There's only one way to win Knight back, it seems. And that's through some aptly robotic dance moves. 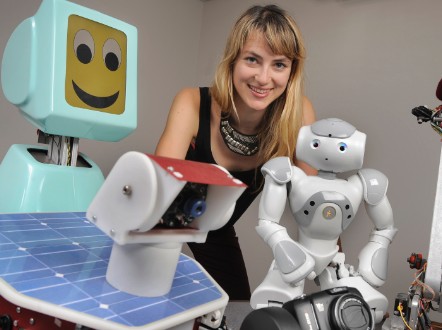 Indeed, Ginger's charm lies in its very "robot-ness" -- which has more in common with human comedy than you might think.

"When it talks about its 'perception capabilities still being in development' -- that gets a laugh almost every single time," explained Knight, who programs all of Ginger's dialogue and movements herself. "People love when it goes all super-techy and acts like a real robot.

"One of the things I've learned from interviewing comedians over the years, is that part of what makes a performance compelling is authenticity. If you're going to be a comedian, you need to bring material from yourself."

And like all good comedians, Ginger must read the crowd. In this case, that involves programming the machine to pick up on social cues like clapping and even smiling.

When you succeed, everyone will rush to your sides. But until then, if people think you're crazy, you might just be doing something no one else has done before.
Heather Knight

"Things like laughter, applause, these are symbolic things that we all do," says Knight. "So when you're in a theater you can have hundreds of people that are also data points.

"In the past I've given the audience feedback cards that were red on one side and green on the other, so they could explicitly tell the robot through its vision whether something was working or not."

Regardless of Ginger's comedic powers, the adorable bot could one day influence the "personalities" of other machines.

"For example, if you had a robot that's delivering juice boxes in a pre-school, then you'd want it to be pretty warm," explained Knight.

"But if you have a robot that's a security guard in a garage at night, with some suspicious people hanging around, then being a little intimidating can totally be appropriate."

While other engineers compete to create the most human-like robot ever, Knight says they might be better off making machines that "we just really like having around."

"There's all these different relationships we have with technology now -- frustration with our software updates, or bonding with our cars to the point of naming them," she said. 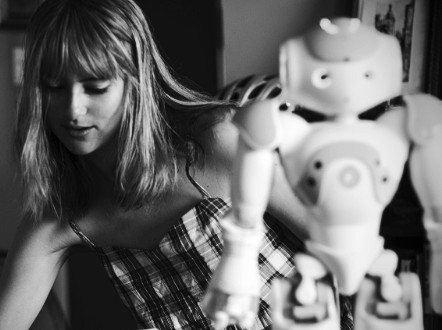 "I want to make robots that anyone walking into the room can understand. I want my robots to reach out and touch you, to react to you, to provoke and challenge our emotions," said Knight.
Courtesy Heather Knight

"So it can be refreshing to have a piece of technology actually making fun of its self, rather than just inconveniencing us when it's supposed to be improving our lives."

"When the robot makes fun of me, it means I can tell you about my research and it's like my own self-deprecation," explained the bubbly engineer, and you get the feeling her popularity is not just down to Ginger, but her own charismatic stage presence.

The recipe for success is a little self-reliance, a dose of bullheadedness, and a resolute steadfastness to your dreams
Heather Knight

"It's the spoonful of sugar that makes the education go down."

One thing's for sure, science class would have been a whole lot more interesting with these two at the front.

"They call me Ginger the Robot, gosh I love saying that. It makes me feel like some sort of super hero," says the miniature machine with a jerky swivel of the head.

"But actually I am just a mediocre robotic comedian."

Quiz: 10 female scientists you should know

Twitter Chat: How do we get girls into STEM?