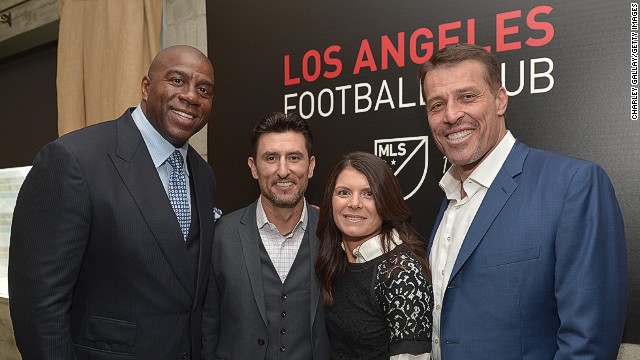 (CNN) -- Derbies often provide the highlight of any football season -- whether that be Boca Juniors vs. River Plate, AC Milan vs. Inter or Arsenal vs. Spurs -- and Major League Soccer (MLS) is now hoping that Los Angeles can join that illustrious list.

For the hope for the city's new franchise, whose working title is simply Los Angeles Football Club, is that it can have an intense rivalry with four-time champions LA Galaxy.

The first derby is scheduled to take place in 2017, when the club is set to enter the league.

And it should be a high profile event if any of the illustrious co-owners, NBA legend Magic Johnson, U.S. football great Mia Hamm and her husband, Major League Baseball star, Nomar Garciaparra, attend.

Wow! First the Dodgers, then WNBA with the Sparks and now MLS ownership with the Los Angeles Football Club! #LAFC2017 pic.twitter.com/MANcCARdvk

Read: Lampard - 'MLS is my next big challenge'

"We feel strongly that this city cannot only support but will really thrive with two teams -- rivals on and off the field," said Don Garber, the MLS' long-standing commissioner.

The future of soccer in the U.S.

"This visionary ownership group will chart a course that will further elevate the sport in this great city and, combined with a new state-of-the-art stadium, accelerate us down the path toward becoming one of the top leagues in the world," he added.

Yet the MLS is well aware of the need for caution given that Los Angeles FC's creation comes just three days after the city's former second club, Chivas, ceased operations following 10 years of existence.

Set up in 2005 by Jorge Vergara, the owner of Mexican side Chivas de Guadalajara, and Mexico City businessman Antonio Cue, the American Chivas failed in its aim of tapping into the interest of LA's sizeable Hispanic community.

The fact that the club ground-shared with Galaxy may have hindered its ability to establish its own identity, which might explain why a new stadium for Los Angeles FC is a leading priority.

"We believe this team can become one of the most outstanding clubs in the MLS and a globally-recognized brand," said the ownership group's leader, Henry Nguyen, in a statement.

"Today is day one and time for us to focus on developing a world-class stadium for the club to play in and for fans to enjoy."

"There are four key elements to success in MLS soccer," he said.

"You need a community that loves the game, owners that are passionate about the league, and you need to have them be local - it's important for them to come from the community yet support that effort with resources from international investors, which is very much the case here.

"Lastly, we need to have a plan for a stadium, whether that is a large stadium downtown or a soccer stadium that we start from scratch."

"We have all of those elements here."

In addition to uncertainty about the team's official name, prospective fans must also wait for confirmation of who will form the front office, coaching and administrative staff.

What is known is that Peter Guber, who owns NGA's Golden State Warriors and co-owns Major League Baseball's Los Angeles Dodgers, will serve as executive chairman.

Los Angeles FC's presence will make the MLS a 22-team league in 2017 with New York City FC, which is co-owned by English Premier League side Manchester City and baseball side New York Yankees, and Orlando City joining next season.

Starting with ten teams in 1996, the MLS will thus double in size to 20 teams as it enter its 20th year.