Zara Phillips targets Olympic gold with baby Mia by her side 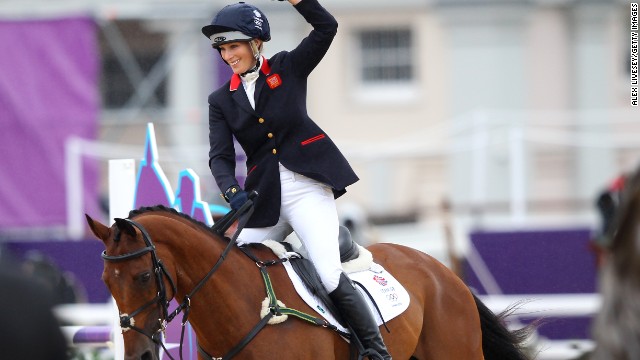 Having given birth to her first child in January, Zara Phillips has since returned to competition and helped Great Britain qualify for the 2016 Olympics with her performance at August's FEI World Equestrian Games. 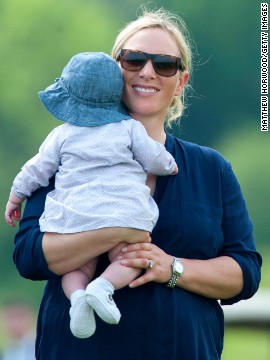 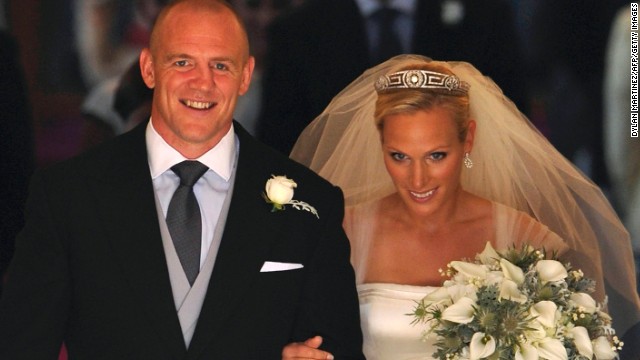 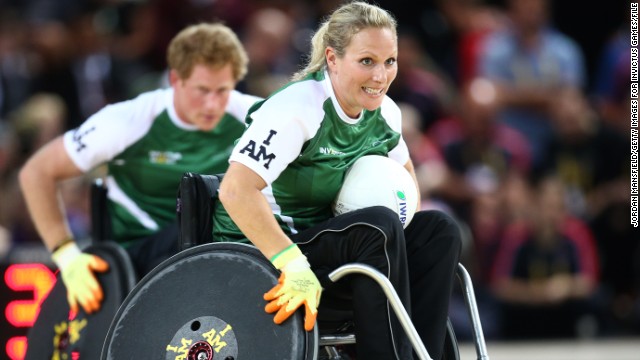 In September 2014, Phillips and her husband took part in a wheelchair rugby exhibition match during the Invictus Games for war veterans organized by her cousin Prince Harry (pictured behind). 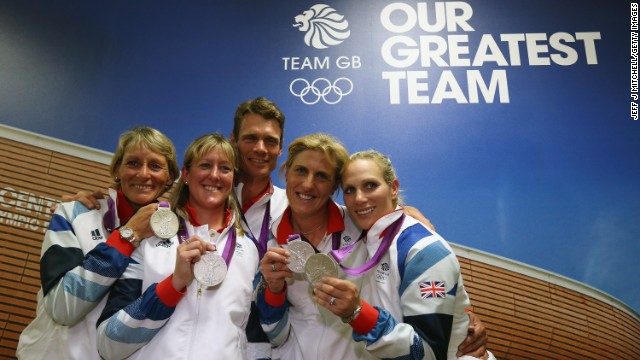 After missing out in 2004 and 2008 due to her horse Toytown sustaining injuries, Phillips had to wait until 2012 before she participated in her first Olympics, in which she won a silver medal in the team equestrian event. 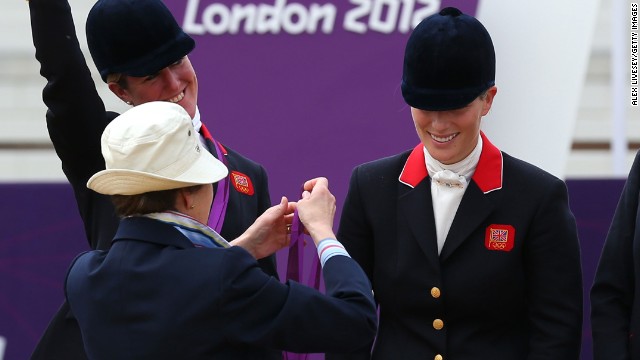 She was presented her medal by her mother, Princess Anne, who participated in the 1976 Olympic Games in Montreal as a member of Britain's equestrian team. 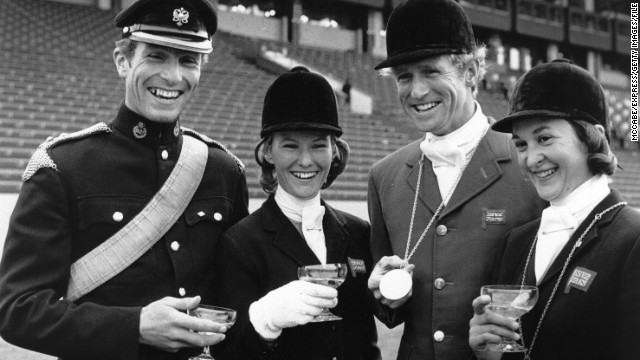 Her father Mark Phillips, left, was part of Britain's gold-medal-winning eventing team at the 1972 Munich Olympics, and he also won silver at Seoul '88. 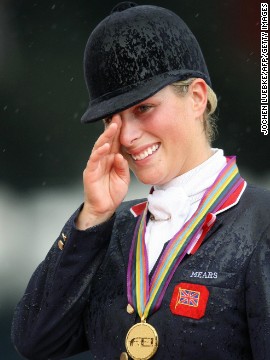 The 33-year-old Zara is a former world champion, taking gold in 2006, and won European titles in 2005 and 2007.
HIDE CAPTION
Olympic mission
Mother and daughter
Sporting couple
Family ties
London success
In the family
Golden heritage
Champion of the world
<<
<

(CNN) -- Zara Phillips is not one to rest on her laurels.

After giving birth for the first time in January -- providing Queen Elizabeth II's fourth great-grandchild -- the equestrian star could be forgiven for taking a break from the harsh demands of the stables.

Yet just three months on, the British Head of State's eldest granddaughter would find herself back on that familiar saddle competing once more.

By August, she had remarkably gone a long way to likely booking her place in what will be her second Olympic Games.

"It was harder than I thought it was going to be. I had a lot of friends who said, 'Don't come back too quickly.' I sat on a horse about five weeks after (giving birth)," Phillips tells the CNN Equestrian show.

But come back quickly she did.

Eight and a half months after Mia Grace Tindall -- the 16th in line for the throne in Britain -- was born on January 17, her mother placed 11th in the eventing at the Alltech FEI World Equestrian Games in Normandy, helping her nation to silver and Olympic qualification.

Phillips' performance in France, which among the UK riders was only bettered by world No. 1 William Fox-Pitt, could well be enough to persuade Britain's Olympic selectors that she is worthy of a spot in Rio de Janeiro in 2016.

The master plan had come to fruition.

"I always wanted to get back for the Worlds at the right time," Phillips says. "I've given myself enough time to get back where I left off."

The objective now, as well as bringing up her daughter with rugby star husband Mike Tindall, is winning Olympic gold.

She claimed team eventing silver at London 2012, where she was presented her medal by her mother Princess Anne -- who competed for Britain in equestrian at the Montreal '76 Games.

Yet despite now being a fully-fledged Olympian, the 33-year-old Zara still feels she has some unfinished business to attend to when she, if all goes to plan, touches down in Rio in two years' time.

"When you come out of the Olympics you just go, 'Let's just do it all again,' " Phillips says.

"To be able to come out with a medal (in London) was incredible. But we wanted gold and we probably should have got it.

"We'd definitely like to go back and try and change the color."

In 2012, Phillips had a whole host of royalty fighting her corner, with Princes William and Harry, to name just a few, among those cheering on their relative from the stands.

Come 2016, Mia -- who will be superseded as the youngest member of Britain's royal family when William's wife Catherine gives birth for the second time -- could be watching her mother's bid to win gold, having already spent time on the equestrian circuit.

Princess' love for horses and sport

"She's been on the road. There's so many kids on the circuit, so many people who've had babies already," Phillips says.

"We're lucky because we can ride and go back and forth a bit, it fits in really well. It seems to have worked and hopefully it will keep going like that."

Having admitted to not feeling maternal before Mia's birth, Phillips has since treasured the experience of becoming a mother for the first time.

"I've really enjoyed it. In a funny kind of way it's like having another type of high-performance horse on your hands," she jokes.

"It's an incredible bond you have. I'm lucky, she's really good."

Phillips has had plenty of experience developing special bonds down the years, having nurtured a number of relationships with her horses since being introduced to riding as a child by her equine-loving family.

It was with her beloved Toytown that she first started competing properly, soon going on to become both a European and world champion -- taking continental glory in 2005 and 2007, while conquering the globe at the first attempt in 2006.

Olympic success came alongside High Kingdom, and he could well be Phillips' partner in Rio, given that she rode the bay gelding in Normandy.

"I've had him since he was a five-year-old," Phillips says of High Kingdom, now 13. "We've come up the levels together and taught each other everything.

"I'm trying to teach him. I think it really helps that I've had him for that long and know him very well."

How unbeatable team stays on top

What is carriage driving?

Phillips' equestrian career, though, has not come without its setbacks.

Injury to the now-retired Toytown cost her likely selection for the 2004 Olympic Games in Athens, while lightning unfortunately struck twice four years later as another injury to the chestnut gelding ruled her out of Beijing.

Phillips also broke her collarbone in 2008 after falling off Tsunami II, and the horse had to be put down.

"You would hope that you would notice before anything went too wrong. And that's what you always try."

She remains ever-indebted to the role her family have played in helping to lay the foundations for her successful career. Her grandmother, one of the great patrons of British horse racing, still rides at the age of 88.

"I remember always being around the yard and being around horses. It was great fun, you know," Phillips says.

"Horses mean everything to me," Phillips adds. "They're what I do -- my work and my passion. I'm very lucky."

Read: How to hobnob with the horsey crowd