Patrick Reed in hot water over foul-mouthed rant in China 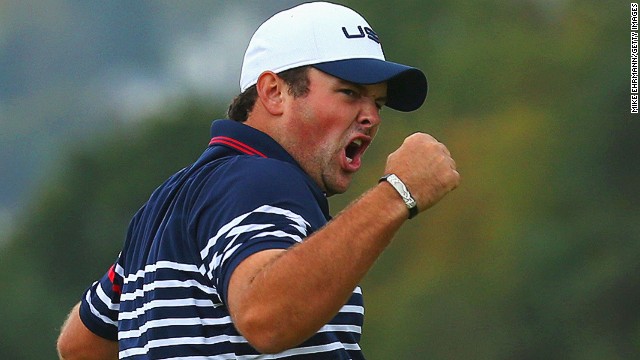 The 24-year-old could be in trouble with golf's authorities after a foul-mouthed reaction to a missed putt during the WGC-HSBC Champions event in Shanghai.

Reed, who starred for America during its recent Ryder Cup defeat to Europe, was caught on camera swearing and using a term which could be deemed homophobic.

I'm sorry for using offensive language today in China. My passion to play well got the best of me and my word choice was unacceptable.

Taking on a long drive champion

Reed, who finished the opening round five shots behind leader Graeme McDowell -- his playing partner -- was quick to apologize on Twitter, but could now face sanctions.

The PGA Tour has rules that govern against poor language on the course, and it said in a statement they were aware of the situation.

"The PGA Tour's Conduct Unbecoming regulations prohibit the use of obscene language on the golf course," it said. "The PGA Tour will deal with this matter internally in accordance with its regulations."

Reed has enjoyed a breakthrough year in 2014, winning two events, including the WGC Cadillac Championship back in March.

After that victory -- the biggest of his career to date -- Reed compared himself to 14-time major champion Tiger Woods and declared himself to be "one of the top five players in the world."

He also caused controversy during his first appearance for the United States in its biennial team battle against Europe at the Ryder Cup, held in Scotland back in September.

Reed, who was unbeaten in his four matches at the competition, shushed the galleries during one of his matches, which earned him a chorus of boos from the home supporters.

Reed fully embraced his pantomime villain status and was lauded for his passion to the cause as Team USA slumped to a sixth defeat in the last seven tournaments.

Patrick Reed just poked the euro bear! Be careful what you wish for. Shhhhhh?

"This is the best event I've ever played in my life," Reed told reporters after his debut appearance. "Just to get to know these guys and to be out here means a lot to me.

"I definitely want to be back and I'll definitely be trying even harder just to come back."

Northern Ireland's McDowell shot an opening round of 67 after recording seven birdies in 12 holes on Thursday at the the $8.5 million showpiece.

"A big key to this course is driving" Gmac followed his own advice hitting 13 fairways today (more than anyone else). pic.twitter.com/4pVwC52Zba

"A big key to this golf course is driving the ball well. I drove it very well today," McDowell told reporters.

"And the greens are in fantastic shape, and I actually putted very well. Dropped a couple coming in, but all in all, very pleased with five-under par on what I thought was a reasonably tricky day."

Read: How golf took over the White House