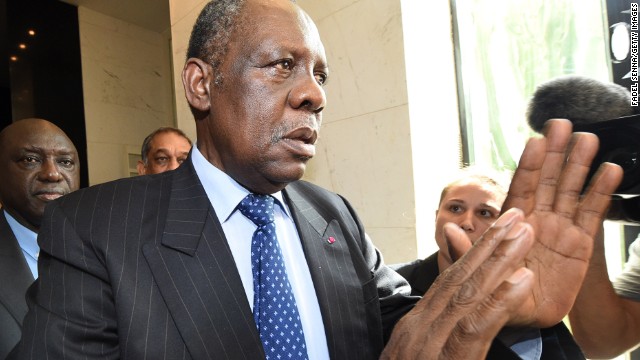 (CNN) -- Morocco should be just two months away from hosting Africa's biggest sporting event. Instead, the country has been barred from taking part in the 2015 Africa Cup of Nations.

National coach Badu Zaki should be fine tuning preparations for his team, perhaps hopeful of success given that over a third of Nations Cup hosts have won the tournament.

Now his team isn't even allowed to compete.

That was the punishment meted out by the Confederation of African Football (CAF) on Tuesday, after Moroccan officials refused to host the Nations Cup in January because they fear the spread of Ebola.

After stripping Morocco of the right to stage the competition, CAF says it is now studying the applications of an unspecified number of countries prior to announcing a new host.

2015 AFCON must go on and we need to support our affected brothers: http://t.co/wUSrTEpsMx

"These applications are currently under review and the Executive Committee will finalize the selection of the successful national association shortly," African football's ruling body said in a statement.

Sorokin: Racism in Russia not 'a trend'

Ghana international Asamoah Gyan is one prominent African footballer to support the decision to maintain the scheduled competition dates of 17 January to 8 February.

"I think the African Cup should proceed, it has to be played whether in Morocco or anywhere," he said on his official Twitter page.

"I heard stories about canceling the tournament and I don't think it is a good thing. We should just support the countries that have been affected by the disease and move on."

Despite knowing where the Nations Cup will be held in nine years' time (Guinea), African football fans still don't know where the tournament will take place in just over nine weeks.

Speculation is feverish as to which country might step in.

After Morocco requested its postponement in October, CAF contacted several countries to see if they would consider hosting should the North Africans pull out.

Of those countries, 2013 hosts South Africa have been the most adamant in saying they do not want the competition.

Ghana was also approached but public reaction in the West African nation against hosting the tournament was strong -- and this may be a problem for whichever country eventually stages the finals.

With CAF rules stating that only the host nation automatically qualifies for the tournament, the Atlas Lions' elimination was effectively landed when Morocco decided against hosting the tournament on Saturday.

A letter from Sports Minister Mohamed Ouzzine informed CAF that Morocco was maintaining the stance it adopted last month, when it asked for a postponement of at least six months to allow sufficient time to contain the Ebola outbreak.

CAF's decision to disqualify Morocco comes on the day that the team began preparations for Thursday's match against Benin, which had been intended as a Nations Cup warm-up.

The Ebola virus has so far ravaged three West African countries -- Guinea, Liberia and Sierra Leone -- with 4,960 reported deaths, according to the World Health Organization (WHO).

On November 3, CAF rejected the Moroccan request for a variety of reasons -- the most prominent of which was that the WHO was only recommending the cancellation of large gatherings in those countries most affected by the outbreak.

Morocco has been untainted by the virus so far.

It said its call for a postponement was "dictated by health reasons of the most dangerous kind, linked to the serious risk of the spread of the deadly Ebola pandemic."

The government believed thousands of traveling fans from West Africa posed a potential health hazard, although CAF countered by saying it believed less than a thousand would travel from that region.

In its statement on Tuesday, it also hinted at likely sanctions for Moroccan authorities.

CAF's Nations Cup rules suggest that the Moroccans may be in line for a $50,000 fine, while there is also the possibility of a further sanction for the team given the late withdrawal.

The Nations Cup draw, which had been scheduled for 26 November in the Moroccan capital Rabat, may now also move, said CAF.

The body also added that the forthcoming qualifiers will not change, with the 15 qualifiers set to be determined on November 19.

Most of the interest though will be on the potential sixteenth team in the finals.

Read: In the eye of the Ebola storm