Artist creates 'living paintings' that grow before your eyes

(CNN) -- "A living painting is many things," says artist and designer Aerosyn-Lex Mestrovic. "It's a painting in process, it's a work of film, it's an actual tactile painting."

Mestrovic celebrates the movement behind painting by recording every step of the process on camera. When creating his "living paintings" on a wet canvas, he sets up high-resolution cameras and lighting to capture every stroke, without his hands or the brush ever being seen.

Originally from Buenos Aires, Mestrovic got the idea for this process while developing his first film "Scriptura Vitae," which fuses Japanese performance art with his unique style of painting.

The piece was commissioned as part of the Random Acts art series by the UK's Channel 4, and stars Japanese actress Miho Nikaido, alongside Maki Shinagawa, a Japanese dance theater performer.

Having lived in Tokyo and studied calligraphy for years, Mestrovic often uses ancient texts and his knowledge of lettering in his artwork. 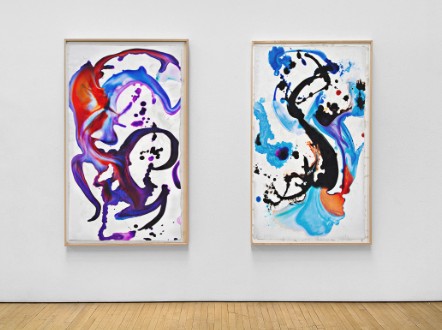 "In calligraphy I think there has to be a certain level of confidence and assuredness in the stroke," he says. "It's something that's so directly tied to the movement of the person creating it that any sort of doubt or any act of faltering is noticeable to the stroke and the movement."

He has a commercial client list that includes the likes of Nike, Coca-Cola and MTV Japan, and has collaborated with Kanye West and fashion house Kenzo, but Mestrovic has also exhibited at the New York Museum of Modern Art. And with a career that varied, as in his paintings, anything could happen next.

"It's exciting to be able to share something as it's coming to life," he says. "Using the mediums of paper, water, pigments, inks, the brushes ... that is the environment, and the gestures and the movements become the vehicle. But I think the story is told by the materials.

"So it becomes this concert, this harmony ... hopefully this equilibrium that is created to where the painting is enacted by me but still takes on its own life and ends up somewhere that I couldn't predict or expect."

Watch: Capturing the beauty of bioluminescence

Read: What happens after you click 'buy'? Betty-Bot gets to work