Gingrich: Obama, you won't win a war with Congress 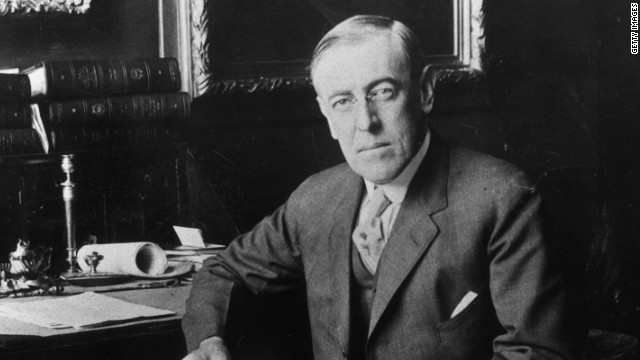 Woodrow Wilson did not realize how deeply senators feel about their prerogatives and constitutional authority.
STORY HIGHLIGHTS

Editor's note: Newt Gingrich is author of "Breakout: Pioneers of the Future, Prison Guards of the Past, and the Epic Battle That Will Decide America's Fate." The opinions expressed in this commentary are solely those of the author.

(CNN) -- President Obama seems determined to launch a two-front war with the new Republican Congress. The bigger news has been about his threatened executive order on immigration. The White House, however, has also indicated a determination to greet the new Senate majority leader from coal country with a series of very expensive environmental regulations necessitated by the climate agreement he announced with China.

Before he takes these steps, President Obama should take a few days off and read a couple of books about President Woodrow Wilson's last two years in office.

There are a lot of parallels between the two presidents. Both were college professors. Both liked to hide on a golf course (Wilson holds the record having played more than 1,000 rounds as President). Both were powerful orators. Both had deeply held convictions. Both disliked the Congress.

The collapse of the Wilson presidency after the 1918 midterm defeat is a cautionary tale for President Obama. Republicans gained 25 seats in the House and five seats in the Senate, enabling them to control the Senate by a narrow 49-47 margin.

Wilson did not seem to realize how powerful that Senate control was, even if by a close margin. He also did not realize how deeply senators feel about their prerogatives and constitutional authority.

Obama determined as ever to bypass Congress

Wilson's reaction to the new Republican Senate was to defy it. He went off to the peace conference of Versailles which ended World War I with no Republican senators in the delegation. He wrote the League of Nations treaty (the forerunner to the United Nations) refusing to compromise with Republicans in the Senate.

When the Republicans insisted on adding some limitations to the treaty, Wilson fought them. He went to the country and launched a nationwide speaking tour. The tension and exhaustion led him to collapse with a stroke on October 2, 1919. The incapacitated president was protected by his wife, who in effect ran the administration until he left office.

President Wilson had presided over the destruction of the Democratic Party -- and it did not become competitive again until the Great Depression a decade later.

President Obama seems determined to reject the American people. He set the terms for this election on October 2 at Northwestern University when he declared that his "policies were on the ballot." The American people took him at his word and defeated Democrats at every level.

When the President's party loses the Senate, additional seats in the House, a number of governorships, and almost 300 state legislators, the American people have spoken.

If the president's opponent reaches those kind of high-water marks after a 160-year history, something big is happening.

Pollster Kellyanne Conway reports that 74% of last week's voters wanted President Obama to work with Congress rather than unilaterally issue an executive order on immigration. Gallup reports that 53% of the American people want the new GOP Congress to set priorities while only 36% favor President Obama setting the priorities. This is a striking decline for the President from 2012 (Obama is down 10 percentage points and Republicans are up 11 points in two years).

If President Obama defies the will of the American people, he will destroy the Democrats' chances in 2016. Democrats in 2014 had to hide from Obama. By 2016, at this rate, they will have to repudiate him. That would all but guarantee their party's defeat, with a party descending into internal strife and the pro-Obama hard-liners fighting with anti-Obama Democrats who just want to survive. Hillary Clinton would find it a nearly impossible environment for a campaign.

There are more immediate consequences to an Obama war on Congress. The Congress will fight back, and the Congress has more tools to fight with than the President does (the spending power, committee hearings and oversight power, and taking votes, to name a few).

Congressional tools are so extensive and so misunderstood that they deserve their own column.

It will be interesting to see how the White House reacts to the new Congress. Outgoing majority leader Harry Reid has protected the President from a lot of difficult choices by controlling the Senate so tightly.

As a result, President Obama and his team may not even fully understand the disaster they could be creating by declaring war on Congress. Reading of Wilson's catastrophic experience might temper the Obama White House. If not, the new Republican Congress will defeat it.