New York (CNN) -- Emergency crews on Wednesday rescued two window washers who were trapped on a hanging platform dangling perilously at the 68th floor of the 1,776-foot One World Trade Center building in lower Manhattan.

Rescue workers used a diamond saw to tear through three layers of glass panes -- the thickest nearly two inches -- to pull the workers to safety about 2:15 p.m., authorities said.

The men were taken to Bellevue Hospital Center with mild hypothermia, police said.

The workers had been tethered inside the apparatus, fire officials said. Additional personal safety cables were lowered from the roof of the 104-story building.

"I see two heads dangling over the scaffolding and one of the guys -- they just keep looking down," Reginald Moye, who watched the incident unfold from the 24th floor of a nearby hotel, told CNN. "They look like they're maybe five feet in the middle of the scaffold, hanging."

A cable on one side of the hanging platform developed slack, leaving it suspended in a near-vertical position, authorities said. The cause was under investigation.

The men were identified as Juan Lizama, 41, of New Jersey, and Juan Lopez, 33, of the Bronx, according to 32BJ of the Service Employees International Union, which represents about 600 window cleaners in New York City.

Fire Commissioner Daniel Nigro said emergency personnel from the NYPD, the New York Fire Department and Port Authority police practiced a rescue from such a rig 10 days ago.

"They were more than ready to operate here," he told reporters. "The result: two men are going to go home tonight."

But it wasn't easy.

"In this case, the glass is three layers thick and, of course, they're 68 stories up," Nigro said. "It does present a little more of a challenge."

Television images showed the rig dangling precipitously at a sharp angle. A Twitter photo from the fire department showed the rig as seen from inside the tower, with New York Harbor and the Statue of Liberty in the distance.

Officials said emergency workers communicated with the window washers via a portable radio lowered by rope from the roof.

The men worked for a company called Upgrade, according to Erica Dumas, a spokeswoman for the Port Authority of New York and New Jersey.

How are scaffold workers tethered? 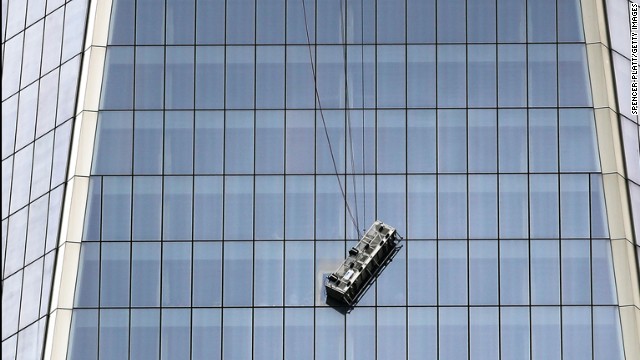 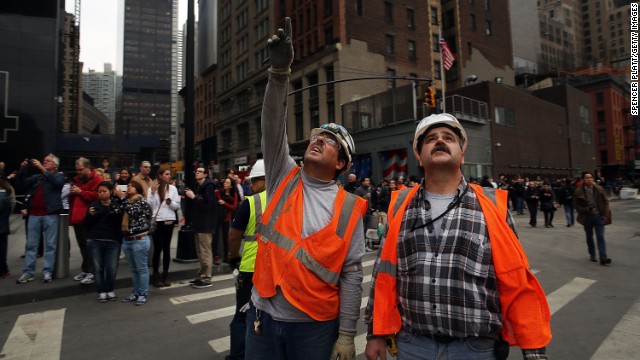 Construction workers look up at the scaffold. 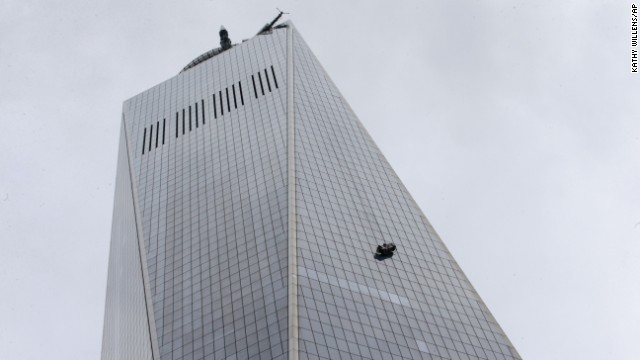 Officials said New York Police Department emergency services units were on the scene and rescue workers had been able to communicate with the two window washers. 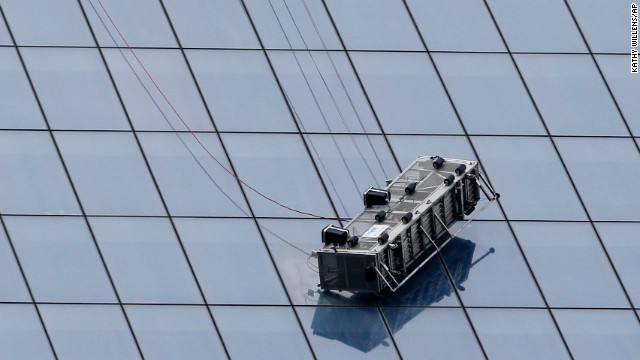 The partially collapsed scaffolding hangs from One World Trade Center. The workers were tethered and uninjured inside the apparatus, the city's fire department said. 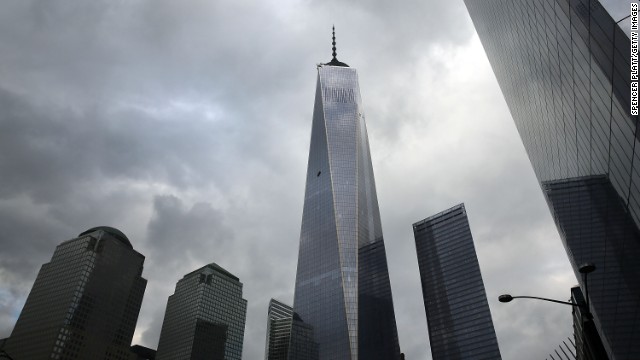 Authorities said a cable on one side of the scaffold snapped, leaving it hanging by only one cable. "They were slowly going up, washing the windows. ... Suddenly (the scaffold) was dangling on one side," Reginald Moye, who watched the incident unfold from the 24th floor of a nearby hotel, told CNN. 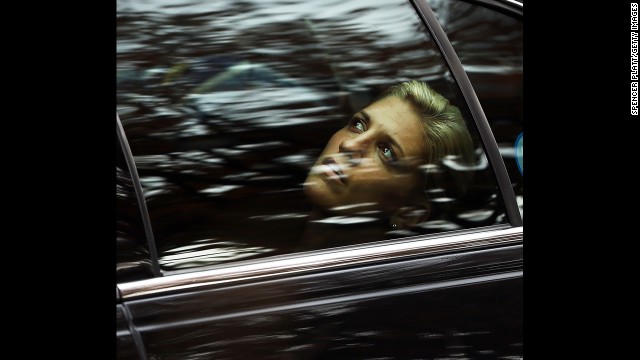 A woman looks out from a car at the dangling scaffold. 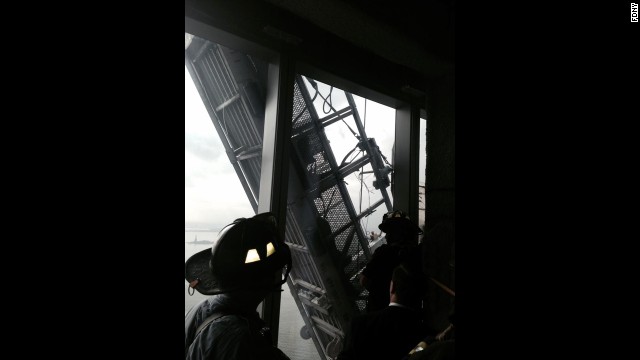 Rescue crews had to cut through glass to pull the workers to safety, the New York Police Department told CNN. 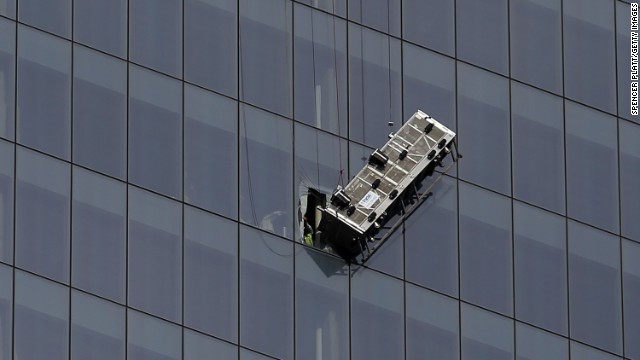 "They were going up, washing the windows, and I was amazed at the view," Moye said. "Wow. Such a dangerous job. So, suddenly, I didn't see it collapse, but once I looked over and said, something is wrong, it was dangling."

Officials at Tractel, the company that designed, built and installed the window-washing rig, had no comment.

Tractel also designed the scaffolding that collapsed at the Hearst Tower in Manhattan in June 2013, according to aerial and CNN footage of both scenes.

In the 2013 incident, two workers were rescued more than 550 feet above the streets of midtown Manhattan after their scaffolding buckled near the top of the tower, fire officials said.

The workers, who spent 90 minutes dangling near the top of the building, suffered no injuries. Firefighters cut through a double-paned window on the 45th floor and brought the workers in through the newly created hole.

The new building officially opened November 3, when the first tenant, publishing company Conde Nast, moved in. Many of the floors remain unoccupied. It is the tallest building in the Western Hemisphere, with a 408-foot spire atop the 1,368 foot tower.

Its predecessor, the Twin Towers, were destroyed 13 years ago when al Qaeda terrorists flew two hijacked passenger jets into the buildings, killing 2,753 people on September 11, 2001.

"It's business. The task at hand is what you worry about. You separate yourself from that. This is business."