Meyers Taylor raced in US selection trials alongside her husband, Nic Taylor

If Elana Meyers Taylor makes bobsled history this season, her husband will have been the driving force.

Meyers Taylor, 30, won Olympic silver at Sochi 2014 – but had a whole new world open up to her last month.

Her sport decided, for the first time, to let women pilot four-man bobsleds.

Until now, women have been restricted to their own two-person event. Meyers Taylor and Kaillie Humphries, the Canadian friend and rival who beat her to women’s gold in Sochi, had been dreaming of this change.

“I didn’t know if it would ever be possible to race and compete in four-man,” Meyers Taylor told CNN.

From sled to sevens

A look of disbelief on the face of Alia Atkinson after she claimed gold in the women's 100m breaststroke on Qatar.
Francois Nel/Getty Images
gallery

“Kaillie and I had already been planning a match race – just the two of us, each driving a four-man sled.

“We had no idea the FIBT (bobsled’s world governing body) would allow us to do it in official races. It’s crazy-fun, fast, and a whole new ball game.”

In October, Meyers Taylor got the news that four-man was opening up to female pilots and set about putting together her team.

Conveniently, she is married to an experienced bobsled brakeman.

Nic Taylor met his future wife on the phone, in 2011, when she was working for the U.S. bobsled federation and he had just completed tryouts. Their conversation was supposed to be about his paperwork.

“It was crazy,” he recalled. “I wasn’t sure who she was, at all. But we were on the phone for hours, into the evening, and I was walking around laughing like I was on the phone to an old friend.”

By 2013, Taylor was begging FIBT boss Ivo Ferriani to pull some strings: he wanted to propose to Meyers, as she then was, during the podium ceremony at the end of that year’s World Championships, where Meyers had won silver.

Ferriani played along and Taylor surprised Meyers in front of the TV cameras. On April 24 this year, the two were married in a ceremony attended by Humphries and other leading bobsledders.

They even shared a secret bobsled handshake during their vows – but neither had any idea they would be racing together, for real, six months later.

Taylor, who spent several seasons in the US bobsled team, now works as a coach at the World Athletics Center in Arizona.

When they heard about the chance to race together, the pair dropped everything. Taylor found time to step away from his new job and back into the world of bobsled racing.

“We’re recently married, we’re starting this whole new chapter of our lives – with an apartment and all these things going on – then we find out about this four-man thing and we’re scrambling to see how we can make it work,” said Meyers Taylor.

Trials to make the U.S. four-man team were set for Saturday, November 8, in Park City, Utah.

The four disciplines of Alpine Skiing

By the start of that week, the Taylors had assembled their team. Elana would be the pilot and Nic the brakeman, with rookie Dustin Greenwood and Adrian Adams filling out the sled.

They would be up against the likes of Steven Holcomb, who piloted the US to four-man gold at the Vancouver Olympics four years ago.

“I had four days’ training, doing three runs each day,” admitted Meyers Taylor, laughing. “And it really was a different experience.

“I’m so much more stable in corners than I am with a women’s (two-person) sled, but mistakes in the four-man sled – because of the weight – have much bigger results, so there is much less room for error.

The Taylors had been together in a sled before. They once held an informal race against U.S. team-mates Holcomb and Katie Eberling, dubbed the “co-coed championships,” which improbably ended in a tie. 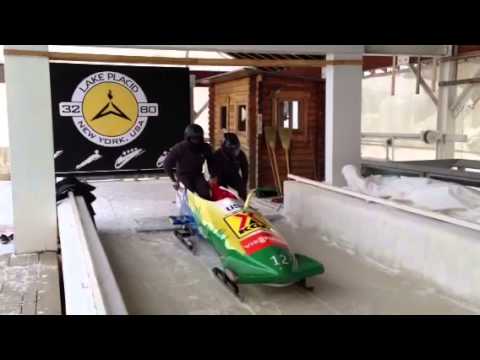 But what surprised Taylor was the way his wife let no pressure show as she fought – with minimal training – for a place on the U.S. four-man squad.

“The closest thing I can relate it to is an NFL quarterback,” said Taylor.

“Pre-race, each driver has their signature style. A lot of the guys get really worked up, like entering a football game, but Elana’s laughing the whole time, which is awesome.

“It just takes a little getting used to. There are guys yelling and grunting and screaming, and Elana’s just sitting around and laughing, ready to go.”

“The first run in a four-man sled was one of the most nerve-wracking I’ve had in my life,” said Meyers Taylor.

“You get this feeling in bobsled, like a combination of excitement, anxiety and pure nervousness, and you get that combination only very few times.

“I remember having it the first time I drove down Whistler’s track. I assume I’ll have that feeling the first time we go to Altenberg, Germany, which is one of the more difficult tracks on tour.

“And I definitely had that feeling going into driving a four-man. I got to the bottom and was laughing hysterically.”

Can high-tech helmet save your life?

Lindsey Vonn vows to take on the men

The top three get places on the U.S. team. Mission accomplished. Part one, at least.

To reach the leading World Cup circuit – and race against Humphries in what promises to be a historic four-man battle – Taylor needs to compete in five qualifying races. That means finding a substantial sum of money.

“I was already planning on competing in four races on two tracks (in North America), and was hoping to get a waiver out of the last race,” she said after the selection races.

“But that now looks unlikely, which means I have to go to France for a race in December.

Not only that, Meyers Taylor will need a new lineup. Her husband’s job in Arizona means, despite helping her to qualify for the team, he almost certainly cannot go with her.

A masterclass in giant slalom

“We spend a lot of time together and he puts me through some pretty brutal workouts,” said Meyers Taylor.

Her husband laughed off that assessment. “It’s more me having her do less, instead of more,” he said.

“She’s one of the most motivated people I’ve ever met in my life.

“That’s one of the things that made me fall for her so far. She keeps driving forward.”

Meyers Taylor, who spent the summer playing rugby sevens and still harbors an ambition to return to that sport for Rio 2016, is convinced she can take on the men and win.

“The biggest disadvantage is the weight. Steve Holcomb, who is one of the top pilots in the world, weighs around 235 pounds, whereas I’m 175,” she said.

“But I”m really not too concerned about it. Kaillie (who also qualified for the four-man at her national trials) and I are two of the fastest, and strongest, female pilots in the world. We have outpushed some of the men before and there’s no reason to think we can’t hang with some of them now.

“We are going to have to drive better than them, because of our slight push disadvantage against some of the top competitors, but we’re all about it – and we’re all for it.”

Read: Where is the best place on earth to ski?