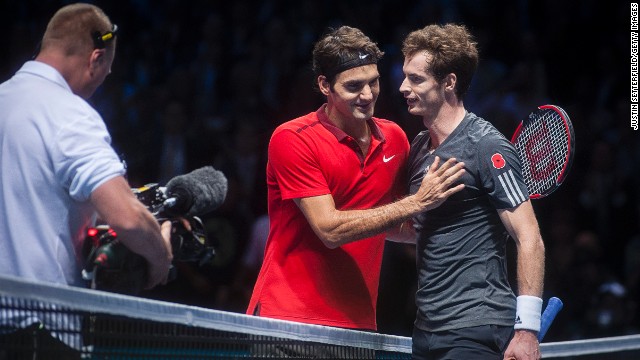 Roger Federer consoles Andy Murray after the Swiss blew the Scot away in a virtuoso display.
STORY HIGHLIGHTS

(CNN) -- Britain's Andy Murray battled long and hard to make it to the ATP World Tour Finals but he may wish he hadn't following one of the most humiliating defeats of his career.

It came against a Roger Federer who was a mixture of majestic, imperious and brutal as he battered the home favorite 6-0 6-1.

With Kei Nishikori having won earlier on Thursday, Federer came into the match knowing he had already made the semifinals -- and that freedom allowed a performance of flair and firepower.

Fifty-six minutes later, he had another exquisite win to reflect upon, a result that sent the Japanese through to the last four.

"I am clearly very happy to have played a good match," Federer said on court.

Will Djokovic be top dog again?

Behind the scenes at the O2

The mental strength of tennis pros

Wear and tear of the tennis season

"I knew I was qualified so I went into the match more relaxed. It's not the way I thought it was going to go."

The Swiss almost won without dropping a game, only for Murray to salvage a morsel of pride in front of the London crowd by winning the 12th game of the match.

Having been just two points away from the first 'double bagel' of his career, his appearance on the scoreboard brought up one of the biggest cheers of the night.

But despite some shaking of heads from the locals in the London crowd, most left feeling they had watched a masterclass from one of the game's greatest practitioners.

"I can say I'm disappointed in my level but if I played well, he would probably still have won anyway," said Murray afterwards. "He played exceptionally well."

"It was a tough night. I've lost (grand) slam finals and stuff, which has been very tough, but in terms of the way the match went, it was not ideal from my side of the court. Far from it."

As he hinted, this was an understatement.

The 17-time grand slam champion needed just 23 minutes to reach set point, and he wrapped up the set for the loss of just eight points.

Winning the set qualified Nishikori for the semis, with the debutant having won 4-6, 6-4, 6-1 against David Ferrer, who replaced Milos Raonic after the Canadian pulled out with injury.

It also eliminated Murray, who had needed to win in straight sets, from the competition.

The Scot kept on losing games -- the seventh, eighth, ninth, tenth, eleventh -- in one of his most humbling experiences and his worst defeat since losing 6-1 6-0 to Novak Djokovic in 2007.

He would not have heard the advice the watching Jose Mourinho gave to Sky Sports television after the first set, but Murray may take some solace from the Chelsea coach's words should he ever hear them.

"There are some matches where we feel it is not our day," said the Portuguese.

"Sometimes a bad defeat is the beginning of many, many victories and hopefully next season will be great for Andy."

Murray is one of the 'Big Four' but Federer, who can still finish the year as world No. 1, put the two-time grand slam winner in his place.

Incredibly, the world No. 2 only got 39% of his first serves in but he won all 14 points when he did.

He has now reached the semifinals of the tournament for a twelfth time, so equaling the record of Murray's former coach Ivan Lendl, as the 33-year-old seeks a seventh Tour Finals title.

He is also in contention to finish the year as world no. 1 but he needs Tomas Berdych to provide a major upset by stopping Novak Djokovic in both players' final Group A match on Friday.

Federer's victory in straight sets continued the theme of the finals but the introduction of Ferrer resulted in the tournament's first three-setter.

The gritty Spaniard, who had practicing at the O2 Arena as the first reserve, came in after Raonic revealed he suffered a slight tear in his thigh when losing to Murray on Tuesday.

"I would be unfair to fans if I was to go out and play a mediocre match," said the big-serving Canadian.

"If I was to step on court, I could lose up to 6-8 weeks. That was a significant factor in my decision."

Nishikori, who lost this year's U.S. Open final, only found out shortly before walking on court that he wouldn't be playing Raonic.

"It was really difficult to make this adjustment (to face Ferrer)," said the Japanese.

"They told me one hour before the match."

He took a while to settle, losing the first set but then fighting back in a performance where he hit 41 winners.

Group A concludes on Friday, with Stan Wawrinka also in action against Marin Cilic, who has lost both his games so far.