The rear hatch of the aircraft taking the U2 lead singer from Dublin to Berlin was missing when the aircraft landed at Berlin Schonefeld Airport on Wednesday.

Besides Bono (whose real name is Paul Hewson), there were two pilots and four other passengers on board, according to Germout Freitag, an official with the German Federal Bureau of Aircraft Accident Investigation.

U2 is scheduled to perform Thursday at the Bambi Awards, Germany's version of the Emmys. Other members of the band were traveling separately.

The ground crew discovered that the hatch was missing shortly after the aircraft landed at 12:26 a.m., 11 minutes after it blew off, Freitag said. 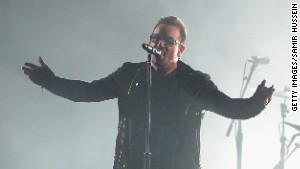 "The ground crew realized the door was gone and two suitcases had fallen out," Freitag said.

"Officials have not yet located the two suitcases or the hatch door, but they have been able to pinpoint the area where they are likely to have landed by the radar."

The bureau has started in an investigation into the incident's cause.

"The investigation will take at least six to eight weeks and will be greatly hampered if the door is not located," Freitag said.

While officials "have no idea at the moment what caused this and need to examine both the door and the area of the plane," Freitag said he believes the rear hatch was not properly closed.

"This sort of thing is not common."

With his suitcases missing, we're not sure what he wore. But the tweet from Germany's foreign office suggests it was his signature black.