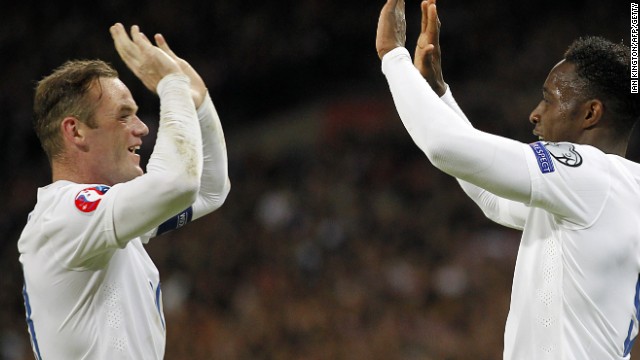 (CNN) -- Wayne Rooney celebrated his 100th cap for England by scoring the equalizer in a 3-1 victory over Slovenia in an Euro 2016 qualifier at Wembley Saturday.

A lackluster England was trailing to a Jordan Henderson own goal just before the hour mark when skipper Rooney changed the course of the match.

The Manchester United striker almost immediately won a penalty after being tripped and converted from the spot to draw his team level.

It was his 44th goal for England, drawing him level with the great Jimmy Greaves, but more importantly sparked his spluttering team into action.

Strike partner Danny Welbeck put the home side ahead with as scrappy goal as his scuffed shot beat visiting keeper Samir Handanovic.

But the third was a well worked move, the Arsenal man exchanging passes with Raheem Sterling before converting neatly.

Four wins from four in Group E puts England well on the way to qualification for the finals in France in two years time.

In the same group, one of the themes of the weekend continued with minnows San Marino, ranked 208th and joint-last in the FIFA rankings, holding Estonia to a 0-0 draw at home.

Its captain Franz Burgmeier scored the goal, for a first competitive win since June 2011.

But there was no such luck for 2018 World Cup hosts Russia, beaten 1-0 in Austria in the same group, a result which leaves coach Fabio Capello's future under the spotlight.

Rubin Okotie scored the decisive goal in the 73rd minute as Austria opened up a five-point lead at the top of the group standings.

Reigning European champion Spain was boosted by a superb opening goal from Real Madrid's emerging star Isco in a 3-0 win over Belarus in Group C.

Making is first start for Spain, Isco picked up the ball just outside the penalty area and curled a fine shot into the corner of the net.

Barcelona pair Sergio Busquets and Pedro Rodriguez were also on target in a comfortable win which is Spain's third win from four matches.

It is tied with Ukraine on nine points, three adrift of table topping Slovakia, who won 2-0 in Macedonia Saturday.