Flare up in the San Siro. Italy-Croatia clash held up by crowd disorder 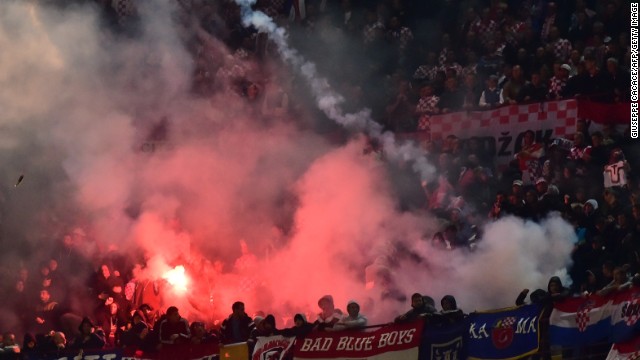 Croatian supporters throw flares on the pitch during their side's Euro 2016 qualifier against Italy at the San Siro.
STORY HIGHLIGHTS

(CNN) -- Crowd disorder caused a top of the table Euro 2016 qualifier between Italy and Croatia Sunday to be delayed as flares were thrown on the pitch.

The match was deadlocked at 1-1 in the famous San Siro stadium in Milan when referee Bjorn Kuipers briefly held up the match before leading the players off the pitch for over 15 minutes.

Most of the flares, coming from the Croatian supporters in the stadium, appeared to be aimed at Italy goalkeeper Gianluigi Buffon.

The match eventually did come to a conclusion with the score staying unchanged.

Antonio Candreva had put Italy ahead early in the match, but Ivan Perisic soon leveled after an assist from Barcelona's Ivan Rakitic.

The result leaves Croatia top of Group H on goal difference from the Italians.

Norway stays third after a 1-0 win in Azerbaijan.

Earlier, there was relief for under pressure Dutch coach after his side beat Latvia 6-0 in Group A.

Hiddink had indicated he might resign after another disappointing result after four defeats in his first five games in charge.

The Dutch, who reached the semifinals of the World Cup under Louis van Gaal, at last showed some of that form as Arjen Robben and Klaas-Jan Huntelaar both scored twice with captain Robin van Persie and Jeffrey Bruma also on target for the Oranje.

But the Czech Republic kept up the pressure at the top of the group with a fourth straight win, beating Iceland 2-1 in Prague.

In other key clashes, Gareth Bale's Wales maintained its unbeaten start to Group B by holding favorites Belgium goalless in Brussels.

Real Madrid's Bale came closest for the visitors with a first half free kick and a low shot which went narrowly wide after a typical surging run.

Nicolas Lombaerts hit the post for the home side, who piled on the pressure at the end.

But the match had a controversial note as Belgium's Marouane Fellaini appeared to deliberately elbow Joe Allen, who was left with blood streaming from his face.

Israel later went top of the group with a 3-0 home win over Bosnia and Herzegovina.